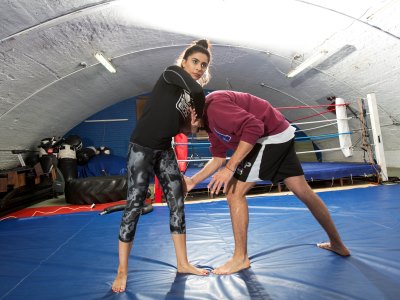 Starring Carey Mulligan, Meryl Streep and Helena Bonham Carter, Sarah Gavron’s Suffragette is the thrilling film celebartaing the remarkable untold story of the foot soldiers of the Suffragette movement as they fought for the right to vote. It opens in UK cinemas today (last Friday we published a report of direct action by Sisters Uncut after the film’s red carpet premiere). 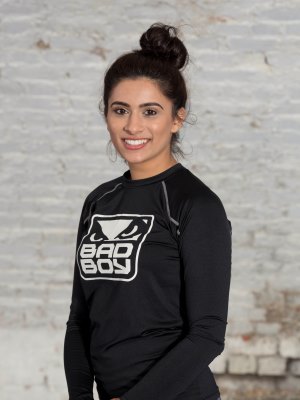 A remarkable and unexpected fact not many know about is that the real-life Suffragettes were trained in jiu-jitsu. Members of the Women’s Social and Political Union (WSPU), fronted by Emmeline Pankhurst, were taught the practise by Edith Margaret Garrud. She was among the first female professional martial arts instructors in the Western world. Even though she was just 4’11” in height, she didn’t let that stop her! By using jiu-jitsu, a martial art which can be used as a self defence system that focuses on grappling and ground manoeuvres, she was able to teach a smaller, weaker person how to successfully defend against a bigger stronger person. This was by using technique body weight and applying joint locks and chokes to the opponent.

To bring this story to life in line with the film release of the film, jiu-jitsu trainer Nikki Sahota (pictured above) ran an exclusive and interactive self-defence Suffrajitsu workshop, which gave attendees a first-hand attempt at the practise. I was gutted to miss it but Nikki shared:

It’s a little known fact that the Suffragettes were trained in jiu-jitsu and learnt self-defence to protect themselves from the violence that they withstood from the police and men during their campaigning. It was led by an incredible lady called Edith Garrud, who taught the Suffragettes some very kick ass moves! I find this story extremely intriguing and so to bring it to life in line with the release of Suffragette, I ran the Suffrajitsu Experience. Owing to my own personal experiences, I’m really glad to be involved with the film and project. I find the importance of women being able to defend themselves as important now as it was as the women fought for the right to vote over 100 years ago.

Set in the heart of the East End at KO Gym in Bethnal Green, the workshop offered an introduction to a number of jiu-jitsu moves that the Suffragettes used to free themselves from the police and men during their protests, which included:

The workshop offered a real insight into how these moves were used in Suffragette times, and how they are still relevant to protect women today.

Suffragette is realeased in UK cinemas on Monday 12th October.

Photos are from Press Workshop with Jiu Jitsu expert Nikki Sahota to promote the new PATHE FILM RELEASE OF ‘SUFFRAGETTE’ on the 12th October @KO GYM in Bethnal Green. Photo: Tim Anderson
First picture is a portrait of Nikki Sahota, a young woman with dar hair in a bun on top of her head, wearing black jumper, smiling.
Second picture is of a woman applying a self-defence move to a man.