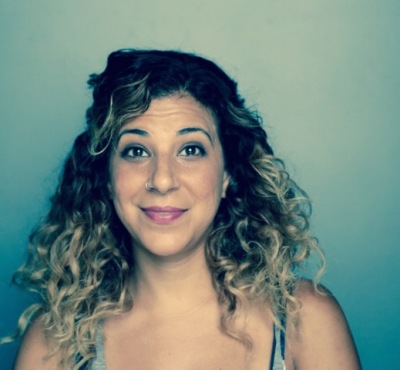 The United Ladies of Comedy 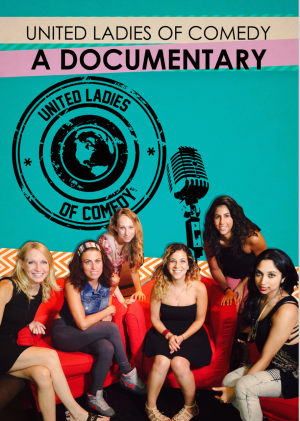 “Do you think women are funny?” Yawn. I am a female stand-up comedian with 11 years experience, and I get asked this in almost every interview. It’s a topic that has been discussed ad nauseam, with documentaries, news articles and Christopher Hitchens’ masterpiece of controversy, the article ’Why Women Aren’t Funny.’ in a 2007 issue of Vanity Fair.

In the USA, it’s no longer the debate it used to be. The list of women who disprove this notion keeps getting longer and longer to the point that it’s silly to even bother listing it anymore. Female comedians in the USA have been around long enough to undo all those cognitive schemas in our heads that it’s a man’s world and there’s no place for a woman in it. Women are funny too, and we will continue to see this over and over and over again.

It is my dream that one day it will be ridiculous to be asked whether or not women are funny. The phrase ‘female comedian’, together with the phrase ‘gay marriage’, will eventually be said without the qualifier. A female comedian is a comedian, and gay marriage is just marriage. But until then, women can be happy with the strides we’ve made. In the 1970s, comedians like Joan Rivers and Phyllis Diller fought for every bit of stage time they got. And while American women comedians are now getting plenty of work, in the newer comedy scenes around the world, females are at the beginning of this process.

In 2007, I went to Egypt. I hadn’t seen my extended family there in over 15 years and, naturally, they asked what I’d been up to in that time. I mentioned stand-up thinking I’d get the usual reaction of “Oh cool, how’d you get into that?”, but they’d never heard of stand-up comedy. After explaining it to them, they looked at me trying to comprehend. “So … you’re like a clown?”

Nowadays, and probably mostly due to YouTube, there is a growing stand-up comedy scene in Cairo. Comedy clubs are popping up in cities all over the world; it’s no longer just an art form found in English-speaking countries. The more I’ve travelled, the more I’ve learnt that I can always find a comedy club, or at least a comedy night, and most of the time in English. Booking comedy shows has become a great excuse to visit cities I’ve never been to before.

Last March, basing myself out of London, I travelled to Stockholm, Malmo, Gothenburg, Copenhagen, Brussels, Mechelen, Amsterdam, Utrecht, and Paris for gigs. Sometimes the audiences were English-speaking ex-pats, sometimes the audiences were locals – usually it was a mix of both. I met so many comedians from all over the world, and it piqued my curiosity. In the relatively newer comedy scenes, how are women faring? So I asked some. 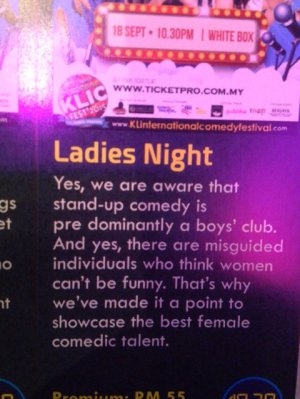 Asya Yavitz, a female comedian in Moscow, says on stage she plays the role of dumb girl, even though she’s head of her IT department at work, echoing Phyllis Diller in the 1950s playing herself down so she wouldn’t be a threatening woman in the eyes of her audience.

“Unfortunately the majority of our audiences are Russian and not foreigners, so you have to joke as a woman, and not as a man.” When I asked her to elaborate she said, “You can say you’re head of a transnational corporation, but you should admit/joke on HOW you got this job, or that you are a blonde who understands nothing … female stupidness is obligatory, even if you’re head of your IT department.”

So, in other words, if you’re a successful beautiful female, you definitely slept your way to the top. And while that’s not too far off from USA stereotypes, it is at least a little more taboo to say so.

Russian culture is full of its own taboos, like swearing, that must be heeded when performing. Not all foreign comedians pay attention to them when performing in Russia. Asya states, “I’ve seen girls from the USA who performed at our open mic, and the reaction from the foreigners was OK, and of the Russians, uncomfortable, because we seldom accept emancipated women, and for sure don’t consider it as something funny, more often as something strange.”

In China, stand-up comedy as we know it is not yet part of mainstream culture. Chinese audiences will go see a ‘talk show’ by a famous figure, but not necessarily a stand-up show with native up and coming comedians telling jokes. However, there are English comedy nights with a majority of English-speaking ex-pats making up the audience. These comedy nights are growing in Hong Kong.

But while the art form is gaining acceptance, it seems female comedians may have a long way to go. Jameson Gong, booker of Take Out Comedy Club in Hong Kong, says audiences do not favour female talent. Of the 25 local comedians he keeps in regular rotation, three of them are women. “Very few women have hit our stage and stayed with it to make our weekly rotation,” says Gong. As for bringing female talent from out of town, “Professional comediennes unfortunately do not sell tickets … so over the past three years, I’ve only brought over one,” and he adds, “Generally speaking, female comedians are perceived as not as funny as the men … not yet.”

It’s not like that all over the world. Kristel Zweel, a Dutch comedian living in Singapore, says that while doing shows in the Netherlands, you have to constantly prove yourself as a female, but when in Singapore, it’s a different story. “[The audiences] view women as strong, and are curious when a female takes the stage, excited about what she has to say.”

While female comedians across the world are at different points in their struggle with stereotypes, familial and societal expectations tend to be a universal similarity in my experience

While female comedians across the world are at different points in their struggle with stereotypes, familial and societal expectations tend to be a universal similarity in my experience. Comedian Myriam Ramirez in Mexico City is dating another comedian (which I’ve noticed to be a bit of a trend among female comics). “My boyfriend does improv, so he very much gets what it means to do comedy. I am very lucky because for a lot of my friends, love has been an obstacle for stand-up.”

Myriam continues, “I live in a society where it is not yet easy to understand a woman who wants to work 4 to 6 nights a week instead of being there for her loved ones … At first it is just catharsis and for someone that lacked attention as much as I did, being on stage, all loud and talking about penises, made me feel that much stronger. But the boys do not necessarily want to introduce that girl to their mother.”

Comedian Elena Gabets in Stockholm has had a hard time dating since she started doing comedy two years ago. “Actresses and writers – they have a flock of men to choose from. Female comics – single, single, single … is getting up on stage with jokes when you’re a girl seen as some kind of deficiency by other people?”

When I asked Elena how her family reacts to her doing stand-up she said, “My mom is neither pro nor against me doing stand-up. She thinks I’d spend my time better on work and trying to meet a man to have a family with, instead of running to performances. But she thinks by performing I will meet many more people and the guy of my dreams. If she only knew the reality … But I am not the one to tell her.” 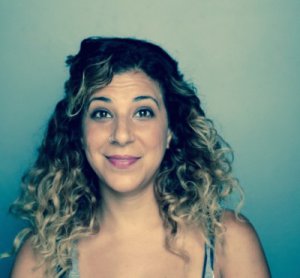 United Ladies of Comedy is a documentary where I set out to discover the cultural differences and universal similarities for female comedians from around the world. I’m currently seeking sponsorship or investors. If interested, please contact me at [email protected].

[All images are owned by the author.

Picture 1 is a promotional image for the documentary. Six smiling female comedians sit on red sofas in the foreground in front of a blue background with an outline of a microphone, a logo for the documentary, and the words ‘United Ladies of Comedy’ and ‘A Documentary’ above.

Picture 2 is a photograph the author took of a poster in Malaysia. The text reads: “Ladies Night. Yes, we are aware that stand-up comedy is pre dominantly a boys’ club. And yes, there are misguided individuals who think women can’t be funny. That’s why we’ve made it a point to showcase the best female comedic talent.”

Picture 3 is a photograph of the author, Maria Shehata. She has curly hair and is smiling into the camera.]