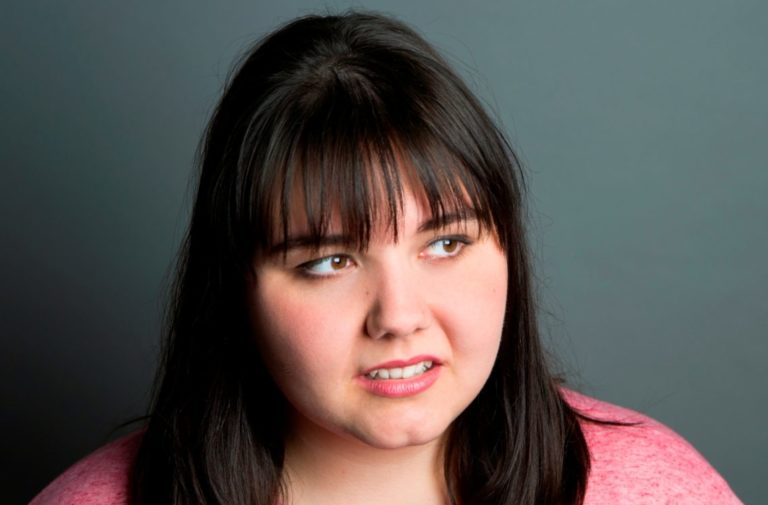 Sofie Hagen is a Danish comedian who won the Foster’s Best Newcomer Award this year at the Edinburgh Fringe Festival. I saw her show, Bubblewrap, on 21 October at the Brighton Dome as part of the Brighton Comedy Festival.

Bubblewrap is a lovely comedy show. Generally autobiographical in nature it takes in Hagen’s childhood with a single mother, her teenage obsession with the band Westlife and sex and body image in a warm and funny hour. She’s not afraid to laugh at herself and after a run of a few shows that I’ve seen where audience members are expected to stand up and join in, it was a total pleasure to sit back and laugh at someone else’s jokes with absolutely no audience interaction. It’s a well-shaped hour with a clear beginning, middle and end. Hagen opens with two stories about herself that set the scene right from the start.

In the first she tells of how she was encouraged by her mother when very young to steal a small plastic horse from a shop: Hagen had been asking for the toy, her mother says, “What are you going to do about it?” and Hagen steals the horse. Her mother lets her keep it. Hagen returns to the concept of stealing the horse later during the show as a metaphor for living by your own rules and taking what you want from life.

In the second she talks about a one night stand that involved her being asked to wee on the man she was with and how that turned out. In both this story and in previous 10 minutes that I’ve seen of Hagen I’ve really appreciated her sex positivity and her clear delight in embracing her own sexuality, whilst retaining a sense of the ludicrousness of it all.

Much of Bubblewrap is based around Hagen’s love for the band Westlife. She describes how when she was young she would sit down with her mother’s telephone in Denmark and ring Dublin phone numbers at random trying to track down the band. The date when Brian left the band, March 10, 2004, is described with a heartfelt “never forget, never forgive.” She uses this experience of fandom shared by many teenage girls to good effect in various ways.

Most movingly she speaks of how as a teenager she felt that she wasn’t good enough the way she was and that it was impossible for her to be both fat and happy. Ultimately these feelings led to her having depression and self-harming, and she thinks that her love for Westlife and the trouble she was going to to track them down enabled her to perhaps postpone her depression for a few years.

Brilliantly she reads us some of the 350 short stories she wrote about Westlife. Fanfiction as a subject is starting to feel a little worn for me, although there’s clearly a lot more that could be said about who’s writing it and why, particularly in the area of predominantly female-written slash fiction about men. However Hagen links the subject really well to the rest of the show and the stories themselves had me crying with laughter.

Hagen put many of these stories on the internet before realising that anything posted there might end up staying there forever and many of these stories have her full name and the names of some of her friends attached. These stories are weird and wonderful with clunky dialogue, unlikely male gay sex and strange plots. Surprisingly Hagen explains that she put her name to these stories hoping that the band themselves might find them and know that she’d written them. I wonder if there is a link between teenage Hagen’s wish to be “out there” on the internet and present day Hagen’s happiness to be on stage telling a room full of strangers about intimate details of her life. Whether there’s a link or not, it’s very funny.

Within the community of Westlife fans she managed to engineer enough meetings with the band – usually via radio and television programmes, not through random phone calls – to become almost a minor celebrity in her own right. One of my favourite sections described a car chase where a very young Hagen sees the band leave a building so leaps into a taxi and tells the driver to “follow that car”, and he does. Her description of the matter-of-fact way that Westlife greet her when she catches up with them is very well done, they don’t react with surprise at all as by that point, she was a semi-regular feature in their lives.

Bubblewrap is a fantastic first hour from a new comedian and well deserving of the Foster’s Best Newcomer Award. The jokes are funny and non-obvious, there’s a strong through line and several themes and ideas are explored. Go and see it if you can; I look forward to seeing what she does next.

Bubblewrap can next be seen at the Nottingham Comedy Festival in November and Soho Theatre in December and January.

The image is a photograph of Sofie Hagen by Karla Gowlett. Hagen is a young white woman with dark hair looking directly at the camera with a perplexed expression. She has a white plastic toy horse on her left shoulder. Used with permission.