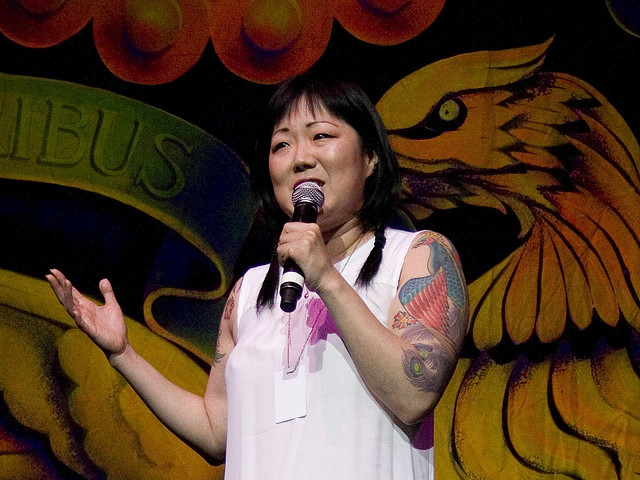 It’s time for another round-up and links this week cover everything from Margaret Cho to eggnog ads!

Katy Wix: ‘I’ve written women who swear and are allowed to be intelligent’ (The Guardian)

From the article: “What cliches of female comedy characters would you get rid of if you could?
Maybe the permanently annoyed girlfriend role.”

From the article: “People assume there is a direct relationship between how much people weigh and their psychological health,” said Jeffrey Hunger, a doctoral candidate in social psychology at the University of California, Santa Barbara. “Our research and other research is showing that no, it’s not about their weight, it’s the treatment they faced and what they worry they will face.”

For six days, Tiahleigh Palmer’s loved ones waited for police to act. Not all victims are equal (The Guardian)

Gabourey Sidibe Refuses To Back Down (Buzzfeed)

From the article: “I’ve been behind the idea of ‘let’s make the work’ for a long time,” she said, echoing other women in the industry like Ellen Page, Zoe Saldana, and Olivia Wilde. “Because I don’t have the privilege of being a pretty blonde white girl … I want to start creating my own work; not just for myself, for other people too.”

Shaved and savage: has comedian Margaret Cho finally gone too far? (The Guardian)

From the article: “She is open about her struggles with eating disorders and addiction, as well as her experience of sexual abuse as a child. ‘I had a very long-term relationship with this abuser,’ she recently told Billboard magazine, ‘which is a horrible thing to say. I didn’t even understand it was abuse, because I was too young.'”

This can be tough material for a comedian, but that hasn’t stopped her. “I figured out a way to talk about it that allows me to show where we are blaming the victim. A lot of times when we talk about rape, we don’t want to talk about sexuality after. I want to still have a right to my sexuality and a right to my power, while talking about stuff that happened to me.” ‘

From the article: “The topic of misogyny among gay men is a difficult one to broach. In my experience, men either simply refuse to believe the phenomenon exists, or the conversation is quickly derailed (“yeah, but what about homophobic women?”). I have a male body, I’m bisexual, and I’m also genderqueer. But I’ve also experienced misogyny from both straight and gay men on the basis of my apparent femininity…”

The lies of Instagram: how the cult of authenticity spun out of control (New Statesman)

The image is used under a creative commons license with thanks to Jim Davidson on Flickr. It shows comedian Margaret Cho on stage in New York during Cyndi Lauper’s “True Colours” tour in 2008. Margaret is wearing a white sleeveless shirt and a lanyard around her neck. A tattoo of a peacock is clearly visible on her arm. She is speaking into a microphone and holds one hand out to the side as if explaining something. The expression on her face is playful and sardonic. She is standing against a black backdrop painted with what appears to be a picture of a yellow bird, which could be a phoenix.