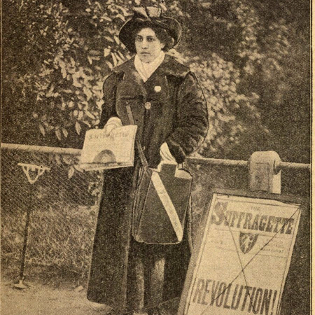 Is suffrage black or white? 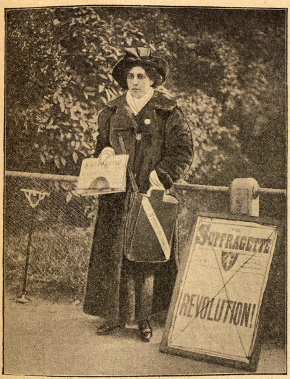 In this review, the term ‘Black’ is used as a political term to define all non-white people.

The release of the film Suffragette earlier this year provoked an online debate for not including Black women in the narrative. Many suggested that the subject of this review, Sophia Duleep Singh – an Indian-born princess who was involved in the suffragette movement – had been deliberately whitewashed from the film, to bolster white women and exclude Black women from the story of the movement. I would guess the production of this BBC documentary Sophia: Suffragette Princess is an attempt to present a Black woman’s experiences within the women’s liberation movement in the UK. The documentary piqued my interest for this reason. However, on reflection, I would argue that Sophia’s story is not necessarily the one we need to be informed about or, rather, it is not as significant as we are led to believe.

Depictions of women’s liberation, be it on the big screen or on a mainstream TV show, are hard to find – and this is particularly the case when it comes to Black women’s liberation from across the world. Sophia’s backstory is an interesting tale: this was a woman who was the daughter of a Maharaja who had had his kingdom in India taken from him by the British, after which he was later exiled to the same country that had robbed him of his standing and wealth. Her father unsuccessfully attempted to take back his throne at which point he decided to abandon his three young daughters and wife in order to live in France with his mistress.

It would not be surprising if Sophia had developed a drive to take on the British Empire for its role in her displacement from her origin country. And yet Sophia became a suffragette fighting for women’s right to vote in the UK. She was raised in great splendour, as her father was a favourite of Queen Victoria and she herself became the monarch’s favourite godchild. Her privileged upbringing granted her access to the social and media elite but, ultimately, it was not her history (the colonial displacement of her family) but her lived experiences of suffering from patriarchial oppression, along with the experiences of her sisters, that provided the gateway for her entry into the suffragette movement.

Regardless of class, women were often beaten and sexually molested by the police, demonstrating the gendered nature of the state’s attacks on them

How does Sophia fit into the suffragette movement overall? The BBC documentary, Sophia: Suffragette Princess is clearly very focused on illustrating the leading role she played. For example, one aspect mentioned is her part in the Black Friday protest, which saw many of her suffragette comrades attacked by the police and even molested, prompting her to write to the Home Secretary Winston Churchill robustly expressing her outrage. This event is presented as the vehicle consolidating Sophia’s campaigning and activism.

However, aside from this, the documentary does not reference how Sophia organised women’s groups towards the suffragettes or what role she played in bringing the rights for women to vote; there is no indication that she galvanised women and allies to the movement. All of this is not to say that Sophia’s bouts of activism should not be applauded and recognised, but there were growing numbers of other women who stood outside their workplaces handing out leaflets for the right to vote every single day. Yes, Sophia threw herself at Prime Minister Asquith with the poster ‘Votes for Women’, but evidence also suggests she was reluctant to take a leading role in the suffragette movement. For example, we learn she was quiet and timid, not chairing meetings and, if she did speak at them, would only mumble a few words. True, Sophia put her wealth to good use in helping fund the suffragette movement, but she never took a leading role in the campaign as it was unfolding into a mass movement. This strongly suggests that Sophia did not actually exercise leadership in her activism.

The presenter Anita Anand speaks of her efforts to showcase Sophia’s contribution to the suffragette movement and admits to obsessively focusing on Sophia’s role. When considering why, I would hazard a guess this has been in an effort to demonstrate that the suffragette campaign was not solely the domain of white middle class women.

Anita also romanticises the role of class politics, stating that Sophia was spared punishments such as arrests, imprisonment and forced feeding, thanks to her royal lineage. This implies that to be beaten up by the police was a moral objective but what it misses is that, regardless of class, women were often beaten and sexually molested by the police, demonstrating the gendered nature of the state’s attacks on them. It is not clear in the documentary exactly why Sophia was spared such attacks but what matters to me is highlighting the challenges the suffragettes faced for standing up to the Government’s oppression of women and how they were abused for daring to wage that fight.

Ultimately, this is the story of one Black woman fighting for what were essentially white women’s rights in the heart of the British Empire

This leads me to again touch on the film Suffragette. This is a progressive film that encapsulates the politics of the movement very well in that it recognises the alliance between aristocratic and working class women as a central part of pushing forward the campaign for women’s enfranchisement. The key issue at the time was not that white women were better treated than their Black counterparts thousands of miles away, but that all women, regardless of class or race, were subject to patriarchial oppression. The film illustrates this point very well when two women from different social strata cannot exercise any control or autonomy over their finances, despite having either earned or inherited their money. The final say over how money is used is dictated by men.

I personally think some of the accusations of racism against the film are unfounded and unfair. Granted, a group of white women wearing white T’s to promote the film, citing the quote “I would rather be a rebel than a slave”, does seem rather racist and insensitive. However, the main charge of racism directed at the film seems to have been that a Black woman was not featured in the main story. I would say it makes little sense to have Black women occupy a central role when there was such a minority of Black people in the UK at this point in history.

Another failing of the Sophia documentary is that, by overstating the role of one Black woman in the movement, it ends up doing a disservice to many other fantastic Black women campaigners. Ultimately, this is the story of one Black woman fighting for what were essentially white women’s rights in the heart of the British Empire. Colour me confused, but I would suggest this is not a compelling story of a Black feminist campaigning for women’s liberation. Sophia’s backstory and pathway into the suffragette movement is interesting and I can appreciate why certain sections of the population would be drawn to her, but I have to be realistic about her contribution to the suffragette movement.

Given the diverse nature of British society, why are we not better schooled in the role Black women have played in Women’s Liberation around the world?

Furthermore, there were no Black women leading the UK movement, despite the claim that Sophia was a leading champion of women’s suffrage. The evidence simply does not stack up to scrutiny. I do not argue this point to minimise Black women’s contribution to women’s liberation. Given the diverse nature of British society, why are we not better schooled in the role Black women have played in Women’s Liberation around the world? Why are we not taught about their part in making Civil Rights laws accountable to the demands of feminism or the struggles they waged with their white counterparts during second wave feminism?

We should be hearing more about activists such as Angela Davis, Alice Walker, Sojourner Truth, Qiu Jin (a Chinese revolutionary who was executed for attempting to take down the Chinese monarch), Kittur Chennamma (who led an armed rebellion against the East India Company) and Sarojini Naidu (the first Woman President of the Indian National Congress). Indeed, there are many untold stories of women leaders who have fought at the forefront of a movement for women’s liberation. These are the ones I want to learn about and discuss.

Ultimately, the campaign to grant women the right to vote in the UK was an important one and should be celebrated as a watershed moment in history, regardless of who campaigned for those rights.

Sophia: Suffragette Princess is available on BBC iPlayer until 22 December.

[Image description and credit:
Sepia image of Princess Sophia Duleep Singh in a wide brimmed hat and long winter coat, with a large bag, selling subscriptions for the Suffragette newspaper outside Hampton Court, London, April 1913. The words “Suffragette” and “Revolution!” can be seen on the paper on the board next to her. The British Library dates this image to 1910. It is in the public domain.]