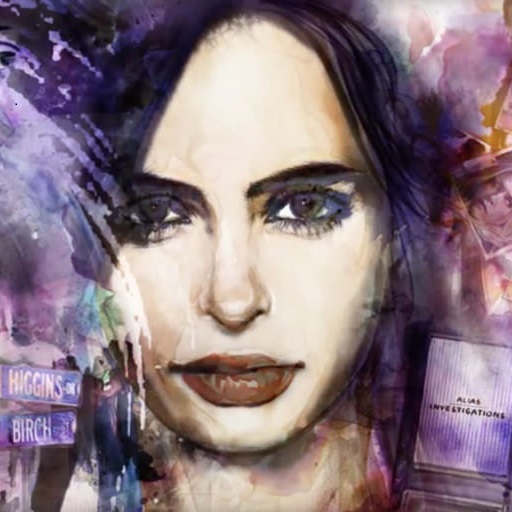 About twenty minutes into Netflix’s new series, Jessica Jones (based on the Marvel comic series of the same name), my husband paused the remote and said, “Have you noticed there don’t seem to be any men in this?”

I looked at him a bit blankly. “Oh, I guess we haven’t seen any. I didn’t really notice. Is this what it’s like being a man watching most television series?”

All snark aside, the Marvel Cinematic Universe is hardly the label that most people would associate with empowering, feminist themes in television. After all, the studio did produce ten movies headlined by blonde white thirty-something men named Chris before announcing a movie starring a diverse lead character.

But Jessica Jones, created by Melissa Rosenberg (writer of the Twilight movie – yes, that Twilight) is a series less concerned with Jessica’s superpowers than the exploration of coping with, and surviving, trauma. Upon reflection, it seems like an obvious addition to the superhero canon – current Marvel superheroes have survived mind control (Black Widow and Hawkeye), occupation of their home planet (Thor) and combat in World War II (Captain America) – and mentions of the heroes’ coping mechanisms once the action slows down would be a way of grounding these films.

Yet Jessica Jones more than fills that thematic gap, while also using its three female main characters to make important points about power, control and abuse in our gendered society. The series revolves around Jessica (Krysten Ritter) who retired from her short career as a superhero after encountering the Purple Man (David Tennant, using his creepy charm to portray an abuser who presents an all-too-ordinary appearance). Jessica has become a private investigator in New York City, isolated from society, using her powers for little more than breaking locks. She is coping with the after-effects of having her mind controlled by the Purple Man, who used his power of suggestion to compel her into a sexual relationship and continues to harass her, forcing people to follow her or pose as clients. The Purple Man has decided that he and Jessica are meant to be together and any collateral damage to people’s mental wellness (or even lives) is an acceptable consequence.

Instead of controlling Jessica by belittling her sense of self, the Purple Man has taken controlling behaviour to a more literal level: he has put thoughts in her head

While few of us can relate to the experience of being a superhero, this conveys an emotional truth about the experience of being in an abusive relationship or being stalked by an ex-boyfriend. Instead of controlling Jessica through a cycle of abuse, denying her reality and belittling her sense of self, the Purple Man has taken controlling behaviour to a more literal level: he has put thoughts in her head, convincing her that she wants to follow his wishes. He threatens her friends in a bid to convince her to send him a selfie every day. “And don’t forget to smile!” he reminds her, echoing every man on the street who has asked a woman to adjust her emotional state for his pleasure.

Throughout the series, Jessica is torn between several instincts: shutting herself off and self-medicating through alcohol, seeking healing through the support of other survivors or enacting vengeance on the Purple Man. It’s an incredibly realistic conflict and while the series praises Jessica for ultimately deciding to use her pain to protect others, the show never judges her for coping through self-harm or for rejecting a redemption narrative for the Purple Man in order to save her community.

Jessica’s best friend Trish (Rachael Taylor) has different demons; a former child star, she suffered childhood abuse from her momager (Rebecca de Mornay) and is determined to reframe herself as a survivor rather than a victim, both through increasing her personal security and for using her popular talk show as a method of advocating for survivors and challenging myths about abusive relationships. Trish has chosen to heal by advocating for societal change and this is treated as an honourable and courageous path. Trish also dispels the idea that superpowers are needed to make a difference in society – by providing unwavering love and support to Jessica, there is an important counterweight to the Purple Man’s gaslighting and belittling of her and a reminder that she is loved and valued.

The final lead character, Jeryn Hogyn (Carrie-Anne Moss) has had an interesting journey from Marvel comics. The character was originally written as a man, but Rosenberg decided to convert her into a lesbian character. It’s a wise choice: a male character trading in his supportive long-term wife to be with his secretary is an oft-repeated cliché. However, with a female character, this is a far more interesting and thought-provoking dynamic. Devoid of the gendered framework of a heterosexual relationship, Jeryn is still selfish and abusive; she attempts to bully her wife, Wendy (Robin Weigert), who supported her through law school and enabled her career, into accepting a unfair settlement.

Throughout the series, Jeryn expects Wendy to endure “death by a thousand cuts”, undermining her work with a non-profit and making a point of taking her new girlfriend, Pam (Susie Abromeit), to the restaurant in which she had proposed. She’s an unusual female anti-hero, in that she is neither played as a seductress or as incompetently emotional. Instead, she is almost reminiscent of Margaret Thatcher; having aped the male power structure and using it to oppress other women, she is unwilling to examine if she is abusing her wealth and position. Jeryn also uses her power, influence and money to eliminate any stumbling blocks or consequences. Any support she offers to Jessica is given as a negotiation, intended to help herself professionally or personally. Jeryn serves as a contrast to Jessica and Trish; instead of using her power to heal or to help others, she seeks the upper hand in any power imbalance and so is slowly revealed to have more in common with the Purple Man than the other two main characters.

Though male characters do eventually arrive on screen, from the villainous Purple Man to the brooding superhero Luke Cage (Mike Colter), Jessica Jones‘ female characters remain the bones of the show. The criticism of television programmes with one main female character is often that this character is then treated as a shorthand for all women. However, Jessica Jones allows Jessica, Trish and Jeryn to deal with emotional stress and trauma in different, yet realistic, ways. As unexpected as it may be from Marvel, they have created the first series of the genre that deals with gender and surviving trauma. In addition to being an entertaining and riveting series, this could present a cathartic experience to many viewers, potentially giving expression to their own trauma and abuse. I can only hope Marvel will continue to explore the chords of other women’s lives.

[Image description and credit: Taken from the Netflix poster advertising Marvel’s Jessica Jones. This is a drawing of the main character’s face with a light purple wash around her hairline and in the background, where the following are viewable: signposts to Higgins [Street] and Birch [Drive] (bottom left), possible photo evidence exhibits (top right) and a door with ‘Alias Investigations’ written on the top glass panel (bottom right). Shared under a Creative Commons License.]