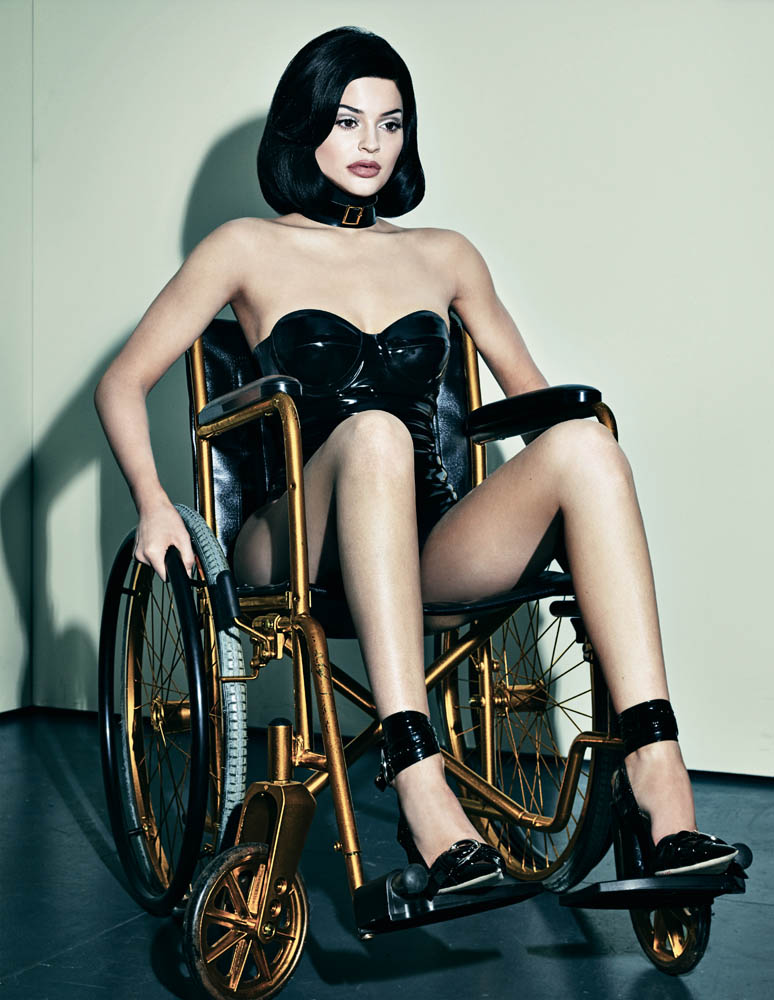 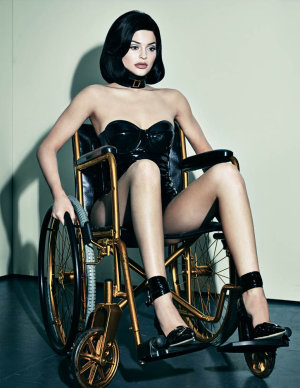 A photo shoot in US magazine Interview has sparked an on-line furore, as it features reality TV star Kylie Jenner wearing a shiny black corset, collar and cuff boots, posing in a large golden wheelchair. It’s an uncomfortable image and the wheelchair – old-fashioned, pared-down to reveal more of the model and completely the wrong size – is a huge part of this discomfort. Kylie Jenner is made-up, posed and photographed to look like a mannequin; she stares into the middle distance without facial expression, like an impressive doll which has been dressed and placed in this position.

The wheelchair is photographed from a low angle, much like the menacing stock-image wheelchairs you’ll see illustrating news stories and articles about disability. Yet in E! Magazine, a rep from Interview seemed pretty confused about the message here:

At Interview, we are proud of our tradition of working with great artists and empowering them to realize their distinct and often bold visions. The Kylie Jenner cover by Steven Klein, which references the British artist Allen Jones, is a part of this tradition, placing Kylie in a variety of positions of power and control and exploring her image as an object of vast media scrutiny.

British artist Allen Jones is famous for his sculptures depicting life-sized almost naked women functioning (one bound in position) as furniture. However one might understand and appreciate these works, neither Allen Jones’ art, nor the Interview photographs place women in positions of power and control – absolutely the opposite.

So this is primarily a sexist image, more than a disablist one. A young woman photographed to look like a nearly naked doll rather than a human being – in other images, she is carried along by the waist, or stored in a wooden crate – but it’s still a huge problem that a wheelchair is being used as a symbol of confinement and passivity. However, the reactions to this photoshoot also tell us a lot about attitudes towards disabled people, and wheelchair-using women in particular.

Much of the objection comes from the idea that Interview are using this wheelchair as a fashion statement or prop. Collected tweets in various news articles state that there’s nothing fun, sexy or fashionable about wheelchairs (apparently, a photograph of a beautiful woman is always sexy, regardless of the context). Many make legitimate complaints about the symbolism of the wheelchair and highlight the unlikelihood of seeing a wheelchair-using disabled model on a magazine cover any time soon, but others focus on how disabled people have to used wheelchairs and we’re not seen as desirable. One person described crying the first time she had to use one, which is sad, but by no means universal.

A wheelchair is only a culturally significant object because of the cultural status of disabled people and wheelchair-users as our most visible representatives. Yet in an ideal world, a wheelchair would be a morally-neutral functional object. A wheelchair can be sports equipment. A wheelchair can be a motorised vehicle. Some users experience their wheelchairs as an extension of the body, more like a prosthetic than something separate. For athletes and dancers, they must be custom made, just like dance shoes. A wheelchair can be pimped up to become a fashion accessory – it maintains a vital function, but few people can live their lives without the use of shoes or bags. The fact that wheelchair-using women, in particular, are seen as sexless by some and fetishised by others, doesn’t mean wheelchairs and wheelchair-users can’t be glamourous, sexy, fun and fashionable. Cars are often sexy, for goodness’ sake – just perhaps not a gold-plated milkfloat driven by the dummy from the Ann Summers‘ window.

By arguing that wheelchairs must only be depicted as exclusively utilitarian and associated with suffering, we play into the very theme of this image; Kylie Jenner is a beautiful doll placed in an impractical chair that confines her – the bondage-themed costume implying that normally inaccurate phrase wheelchair-bound. The experience of being a wheelchair-using woman isn’t inherently crap because we’re not famous women who can get up and walk away – the experience of being a wheelchair-using woman is crap because we live in a world which sees us as passive, helpless, either sexless or sexually exploitable.

A few years ago, Lady Gaga took to the stage as a mermaid in a wheelchair [link to video]. In this context, the wheelchair made narrative sense; in order to get about on land, a mermaid would naturally use a wheelchair. The chair was not a symbolic prop, nor the focus of her visual performance (she was a sparkly mermaid singing a song and flapping her enormous tail, after all). Non-disabled people sometimes participate in wheelchair sports or race souped up mobility scooters. Wheelchairs are not a badge of suffering or charitable status.

However, when non-disabled folk use wheelchair as a joke or as a symbol, or play at being us for a day in the name of Awareness, when they play the parts of wheelchair-using characters at the expense of wheelchair-using performers (usually to great critical acclaim), that’s a problem. What Interview have done here is to appropriate something that’s part of the lives of marginalised people – the universal symbol of disability, no less – as a symbol of passivity and helplessness. And that’s not okay.

[Image is a photograph of a young thin pale-skinned woman with black hair sitting in a gold-coloured manual wheelchair. She stares into the middle distance without facial expression and, from the photograph alone, it would not be obvious if she is a real person on a mannequin. She holds the rims as if she could propel herself forward but doesn’t look about to. She wears a collar, a strapless corset or body and high-heeled shoes with thick cuffs around her ankles in a black shiny material which might be PVC or leather. She sits in front of a pale wall upon which her shadow is projected. The photograph is taken from below the model’s head height.

The photograph is by Steven Klein and appears on the Interview website. It is copyrighted and used here under fair-dealing, as the image is being discussed and criticised.]