The heinous vengeance of women 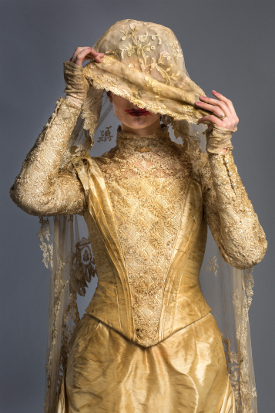 “The game is afoot!” says Sherlock Holmes, finally. The intermittently-running but incredibly popular series Sherlock has produced a one-off special, The Abominable Bride, aimed at appeasing fans in the long wait until the next series airs in 2017. But, for this event, the series creators have made the decision to move the action from its usual modern setting to the Victorian days of Sir Arthur Conan Doyle, writer of the Sherlock Holmes stories.

In an original story based on a throwaway line in an original Conan Doyle writing, Sherlock (Benedict Cumberbatch) and Dr Watson (Martin Freeman) are brought an intriguing case by a spooked Inspector Lestrade (Rupert Graves). Emilia Ricoletti (Natasha O’Keeffe) has been identified as the murderer of her husband – hours after her very public suicide. Subsequently, several other murders are then attributed to the bride’s ghost. Urged by Sherlock’s older brother, Mycroft (co-creator Mark Gatiss), the pair decide to further investigate the case after Lady Carmichael (Catherine McCormack) fears that her husband will be the ghost bride’s next victim.

Sherlock Holmes has never been a particularly women-friendly franchise. The written novels and short stories unabashedly focused on its male characters. Watson’s wife, Mary, passes in and out of the novels without having much effect or character development before her untimely death. Housekeeper Mrs Hudson is monosyllabic, as alluded to and gently mocked in The Abominable Bride when Una Stubbs’ Mrs Hudson asks Watson why she never gets to speak in his stories, only showing visitors up and down the staircase. The episode attempts to lampoon the boys-club nature of Sherlock Holmes stories, with mixed success.

It is exciting that Mary is no longer just a supportive, background character

Creator Steven Moffat has been criticised before for his treatment of women on his TV series. Both Sherlock and Dr Who have frustrated plenty of female fans who wish to see better representations of women in the series they love. There has been notable controversy over the representation of Sherlock’s adversary, Irene Adler (Lara Pulver), with audiences divided over whether Adler was a refreshingly sexually empowered female character or a hypersexual male fantasy.

Meanwhile, Mary Watson (Amanda Abbington), who appears in the Victorian Christmas special as a suffragette, has an expanded role and been developed into an undercover spy, joining the action in both eras as a member of the problem-solving team. It is exciting that Mary is no longer just a supportive, background character and hopefully in the fourth series, she won’t be banished back into the home, caring for the couple’s first child, as she is certainly one of the better portrayals of a female character in the series.

The Abominable Bride presents a secret society of women dressed in purple hoods (one of the colours of the suffragette movement) in the style of the Klu Klux Klan, banding together to punish abusive husbands. A group of Emilia Ricoletti’s friends and other sympathetic women have disguised themselves as the abominable bride to take vengeance on such abuses of marital power.

While Moffatt and Gatiss clearly intend this storyline to be an ode to female emancipation, it is a bit disconcerting. After all, the only real victims of the actions of suffragettes were the women themselves fighting for a vote, while the Klu Klux Klan are an organisation perpetuating racist discrimination. These women were violently force-fed and Emily Wilding Davison publicly committed suicide. It seems a bit inaccurate to present this group of women as murderous, even if the episode (and Sherlock and Mycroft Holmes) are clearly on their side. Sherlock refers to them as an “invisible army, ready to rise up in the best of causes, to put right an injustice as old as humanity itself.”

Sherlock, a purported ally, speaks for the women

The scene evokes more of the same criticisms that have haunted Sherlock, namely, that the women aren’t given an opportunity to voice their oppression. Sherlock, a purported ally, speaks for them. In a time when domestic abuse was still legal and women were denied any input into the law or governance through suffrage, it’s disappointing that Mary or housekeeper Mrs Hudson (revealed in earlier episodes to have a particular fondness for Sherlock after he ensured the conviction of her violent husband) aren’t given the opportunity to speak of their own plight. It also a shame we don’t get to see – in more than quick snapshots – their frustration at being expected to refrain from the action and simply provide a hot meal at the end of the day.

The episode eventually reveals itself to be part of the Sherlock continuity through a mental exercise in which Sherlock is engaged in defeating his nemesis, Professor Moriarty (Andrew Scott). The premise of feminist crusaders is disappointingly dropped to focus on the cat and mouse game between the two old opponents. There are certainly some interesting ideas contained in the special; the idea of women providing an underground railroad of support and protection during the Victorian era is an interesting and exciting place for a Sherlock Holmes mystery to visit. But the execution of the concept diminishes the power of the feminist concept.

Overall, this episode is incredible entertainment, evoking a vintage English horror feel when Holmes and Watson go ghost-hunting on Lady Carmichael’s country estate. Mycroft and Sherlock are always entertaining when battling wits. Dr.Watson’s difficulty in adjusting to his return to civilian life while dealing with PTSD after a war in Afghanistan shows clearly the ways in which societal struggles remain unchanged. Yet as much as The Abominable Bride is an enjoyable evening of TV, it is disappointing to see the villainous suffragettes so mishandled.

The Abominable Bride is available on BBC iPlayer until 27 January, 2016.

[Image description and credit: The bride (Natasha O’Keeffe), in a cream wedding dress and red lipstick, beginning to lift her veil, which still covers half of her face at a diagonal angle. Plain grey/lavender/blue background. Credit: BBC/Hartswood/Robert Viglasky.]