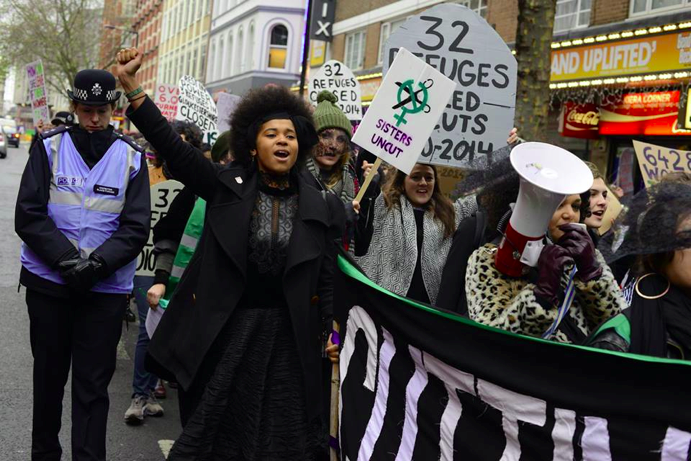 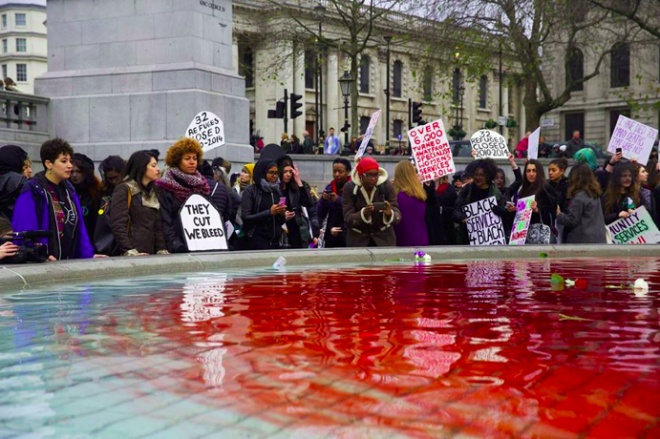 Although only formed in November 2014, Sisters Uncut have made their mark in 2015 and their rise will continue this year. The feminist group, who take direct action to campaign against cuts to domestic violence services, directed much needed attention to this important issue throughout 2015, as they stormed the red carpet at the premiere of the film Suffragette, burned copies of the Daily Mail outside the newspaper’s head offices and dyed the fountains of Trafalgar Square blood red.

Throughout these actions, Sisters Uncut have communicated a clear message: cuts to domestic violence services kill women. Two women are killed every week by a partner or ex-partner. Yet since the government introduced their programme of austerity in 2010, over 30 domestic violence services have been forced to close. Specialist services for black and minority ethnic women, LGBTQ+ people and disabled women have borne the brunt of these cuts.

In campaigning to defend domestic violence services, Sisters Uncut have shaken up the face of contemporary feminism in the UK. They have gained significant media attention due to their innovative tactics and focus on direct action. At a time when modern feminism seems to happen through social media campaigns and online activism, Sisters Uncut have proven the power of taking your campaign onto the streets.

The group are also part of a new wave of UK activists for whom challenging permanent austerity is a feminist cause. Sisters Uncut recognise that austerity measures disproportionately disadvantage women, putting them at greater risk of domestic abuse. What’s more, as feminists are increasingly recognising the importance of intersectionality, Sisters Uncut work to create an inclusive and supportive space for women from all backgrounds.

I spoke to Sisters Uncut over email about the growth of their organisation during 2015 and discussed what the future holds for them. 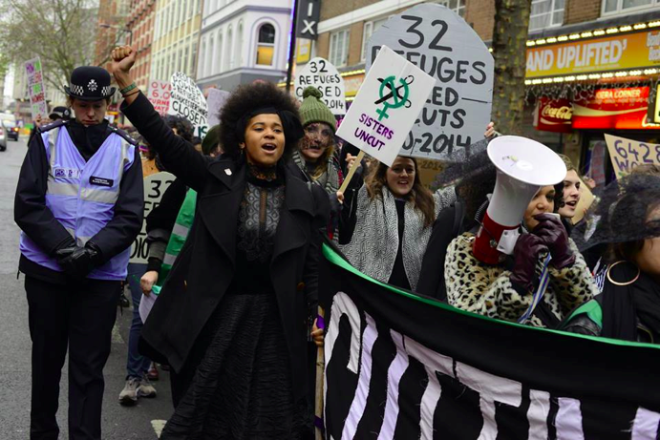 What inspired the formation of Sisters Uncut?
Sisters Uncut was established in November 2014 as an offshoot of UK Uncut – a movement that organises against austerity in general. It was formed by a group of women concerned by the crisis of government cuts to domestic violence services. The cuts make it harder for women to leave dangerous relationships and live safely. Many Sisters are domestic violence survivors and support workers who recognised the devastating consequences of the cuts and decided to do something about it.

Women are dying and politicians aren’t talking about it. In fact, they are making it harder for women to access life-saving services. We won’t stand to see any more decimation of domestic violence services and refuse to be bystanders as more women suffer alone.

People take direct action when they are desperate to be heard, and domestic violence survivors and support workers are becoming desperate

Why did you decide to focus specifically on direct action to get your message across and press for change?
Direct action is disruptive, and we want to disrupt both the cuts to domestic violence services as well as the silence surrounding domestic violence. It forces people to pay attention to you and it gets your message across clearly. The most amazing thing about direct action is that it changes conversations very quickly: there is no coincidence that amidst all our activity this year, George Osborne has specifically mentioned domestic violence in both his July budget and November spending review. He now recognises it’s a key political issue.

In recent years, other feminist groups such as the UK Feminista and East London Feminists have increasingly staged direct actions. Events such as the Reclaim the Night march are being revived by a new generation of women. Do you think this is a trend that is set to continue and signals the start of a new wave of direct action feminism?
People take direct action when they are desperate to be heard, and domestic violence survivors and support workers are becoming desperate. The state of women’s liberation in the UK is still shameful; when two women die a week at the hands of violent men, there is still so much to fight for. We hope that our activity encourages other feminists to take direct action on issues that they care about. 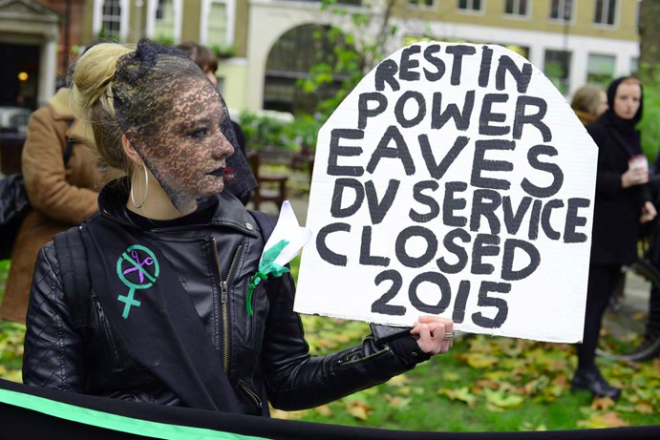 In what ways has Sisters Uncut grown as an organisation since your formation?
In terms of numbers, Sisters Uncut has grown rapidly over the last year or so. What started as a handful of sector workers discussing how to fight back against the devastating cuts has grown into a huge community of women and non-binary people. We can’t state exact numbers, as there is no formal membership process, but it is telling that our Facebook page has over 11,000 likes from supporters across the world.

However, growth doesn’t necessarily purely relate to numbers. Sisters Uncut work to create an inclusive and intersectional space, where women from all backgrounds and experiences feel safe and able to join the movement. As part of our safer spaces policy, we continually revisit the ways in which we practically implement intersectionality in our organising spaces, our actions and our relationships with each other. The group continues to grow and learn in our behaviour, just as we grow and learn in numbers.

Austerity is a political choice that is killing women.  We want this message to remain at the forefront of all media coverage of Sisters Uncut

In recent months you’ve gained a lot of media attention. Do you feel that the media has accurately reported on your organisation and the direct actions you have organised? Or have you come under any media fire?
Despite our disruptive tactics, we have not yet been criticised in the media. What we are taking action on is so serious that it would be shameful for anyone to misreport on our messages and intentions. Two women are murdered a week in the UK by a partner or ex-partner. This single statistic is so heart-breaking and terrifying that even the Daily Mail, whose office we targeted, has written positive coverage of our actions and aims.

Austerity is a political choice that is killing women.  We want this message to remain at the forefront of all media coverage of Sisters Uncut. Sometimes the press get carried away with the image of a group of rowdy women, so we are keen to make sure our message is always visible at our actions.

Will Sisters Uncut continue to focus specifically on protecting domestic violence services or will we see your aims expanding
Sisters Uncut was formed in order to fight the cuts to domestic violence services, and we will keep fighting until women are safe. Of course, our bigger goal is to end violence against women altogether. Over time, our strategies and tactics for achieving service provision and an end to violence will change in order to maximise our chances of success.

Sisters across the country are feeling the force of the government’s cuts. We stand united and fight together, and together we will win

Whilst earlier this month you campaigned in Portsmouth against proposed cuts to local domestic violence services, most of your activities seem to be focussed in central London at the moment. Do you have any plans to set up Sisters Uncut collectives in other parts of the country?
2016 is going to be a year of growth and development for Sisters Uncut. We are quickly building a mass movement of Sisters, and following on from the connections made at the action earlier this month, Portsmouth will be our first regional Sisters Uncut group.

Sisters Uncut is a grass-roots movement, and we have been delighted by individuals from cities across the UK contacting us over the past year to set up their own groups. We are currently supporting them, and we hope that many more regional groups will be starting up in the coming months. Sisters across the country are feeling the force of the government’s cuts. We stand united and fight together, and together we will win.

Keep an eye on our Facebook and Twitter pages to stay in the loop, and get in touch if you want to join or set up a Sisters group in your area! 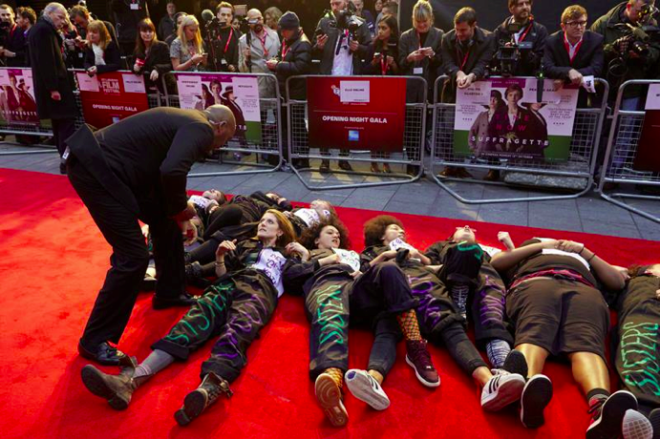 [The first image is a photograph of a group of women looking over a pool which is stained red, as if a quantity of blood has been spilled into the water. The women are holding placards with slogans such as “They cut, we bleed”, “32 refuges closed in 2014” and “Black services 4 black women.”

The second image is of a group of women marching along a street escorted by uniformed police officers. The focal point of the photograph is a young black woman who is holding one end of a banner while holding her free fist in the air. Other women carry placards reading “Sisters Uncut” and “32 refuges closed in 2014”

The third image is of a young white woman wearing black clothes and a black veil over her face, holding up a placard which reads “Rest in power. Eaves DV services closed 2015”

The forth image is of a red carpet which several women are lying down on. Most are wearing trousers which read “Sisters” on one leg and “Uncut” on the other. A darkly dressed masculine figure, possibly a security guard, is leaning over to address one of the women.

All images are the property of Sisters Uncut and are used with their permission.]