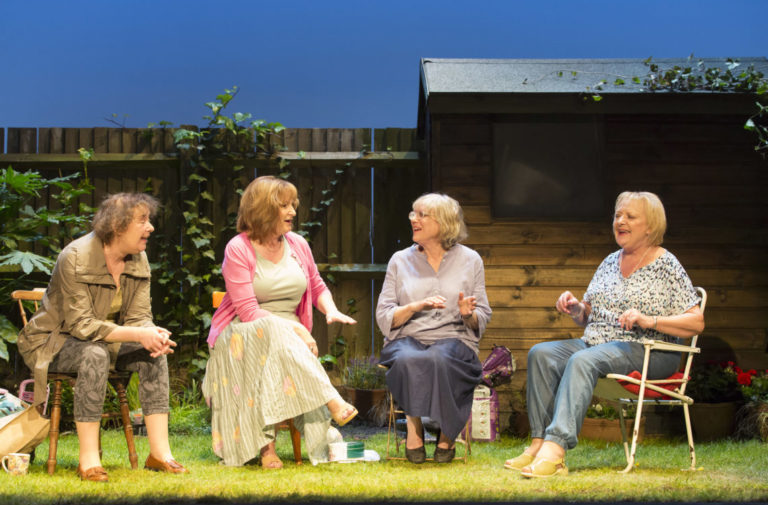 “I’m walking down the street and there’s a door in the fence open and inside there are three women I’ve seen before.”

Escaped Alone at the Royal Court is Caryl Churchill’s latest offering and a brave work. The play is a melding of discussions on feminism, mental health, invisibility, the apocalypse and the tropes of being an older woman. Filled to the brim with wit, drama and truth, Escaped Alone is a wonderful exploration of the female experience.

Escaped Alone is, very simply, a conversation between four women (described by Churchill in the text to be around 70 years old). This, in itself, is revolutionary. Having four older women articulating their thoughts on their lives – on their children, relationships, the menopause, retirement – gives a voice to women who are, by and large, invisible in modern society. Escaped Alone explores life behind the public facade of these women and offers them a chance to listen and be listened to. The treatment of female friendship is so little-examined that simply the subject matter of the play is radical, within the context of popular UK theatre.

The set is both simple and stunning. Set in a garden you would find attached to any suburban house, enclosed by fences keeping out the outside world, and surrounded by a wild throng of plants, flowers and trees, you get the sense that this conversation could happen anywhere at any time. The privacy of the garden, the setting of such a natural environment, helps to spell out the importance of the enclosed space protecting the women and allowing them to speak freely. Praise should go to both the designer, Miriam Buether, and the lighting designer, Peter Mumford, for their exceptional work in creating a world within a world.

The construction of the conversation gives focus to the fact that these women so rarely get to discuss themselves truthfully and openly. Each conversation is natural, with pauses; the women cut each other off mid-sentence and their instinct is to share of themselves rather than listen to each other. Kika Markham, who plays Lena, has exceptional delivery throughout, she is both gentle and firm.

Each woman represents the repressed yet colourful lives they have lived. The conversations range from the mundane, for example the changes they see in the shops on the high street, to the tense, discussing the murder committed by Vi, played by June Watson, and her consequent imprisonment. The structure of the conversations makes it easy to see the similarities and differences, as well as agreements and tensions, each woman has with each other. This example of female friendship in older age moves away from the trope of the nosy yet kindly old women gossiping over the garden fence. The women in this friendship are both together and separate. 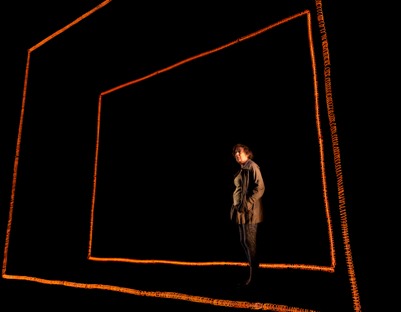 The conversations are punctuated by a series of punchy, dark and humorous monologues by the character Mrs Jarrett, played by Linda Bassett. She delivers stories of apocalyptic worlds where the obese sell slices of themselves and people watch their breakfast through iPlayer. Treated and delivered with humour, Churchill’s writing shows darkness. It is difficult to know what these monologues signal, perhaps one interpretation is that they counter the traditionally masculine interpretations of the apocalypse. Nuclear fallout, violence and desolation make up traditional themes of apocalyptic worlds, whereas the monologues in this play move away from these themes and look at how people survive. This reflects the women’s own survival throughout their difficulties.

The production design at these moments is simple and effective. The monologue turns the stage from the beautiful, green garden to a blackout framed with copper electric lights, which sizzle and flicker. This cements the separation and other-worldliness of the monologues to the main conversation, demonstrating that, in this interpretation of the apocalypse, the thing to fear the most is the human instinct for survival.

The instinct for survival is explored further within Escaped Alone, particularly towards the end of the play. Throughout the piece, the issues that each woman has are, at least once, treated with humour. Sally, played by Deborah Findlay, for example cannot cope with the mention of cats in conversation and Vi has a fear of kitchens. However, each woman has a short monologue in which to explore, with sensitivity, the root of these irrational fears. In a moment of separation on stage, they express their darkest fears to the audience. The simplicity of the stage design, the use of a transitional dimming spotlight on the speaker, shows how each woman is retreating within herself as she communicates what she does to survive and, indeed, whether she does.

In these vulnerable moments the audience can explore their loss, their fears, their logic and their anger

Mental health as a theme is central to these moments where each woman talks to the audience alone. A fear of cats, an exploration of loneliness, the aftermath of a murder and overwhelming feelings of anger are expressed with excellent and truthful delivery. All four monologues are praiseworthy and delivered with sensitivity, and in these vulnerable moments the audience can explore their loss, their fears, their logic and their anger. Again, these monologues contribute to lifting the facades the women use and help to shift the ‘kindly old woman’ stereotype. These moments represent wonderful direction on the part of James Macdonald, who has captured the complexities of the strong emotions represented here very well.

Discussion of these issues does not detract from the light-hearted humour which is found throughout the play, including use of innuendo, sarcasm and wit. A highlight of the play is the women’s fantastic rendition of ‘Da Doo Ron Ron’. They are synchronised perfectly and inject humour easily into their performance, whilst also demonstrating an understanding between themselves, through nudges and signals throughout the performance, exemplifying their friendship.

All In all, this is an important play which embraces important and timely themes of old age, loneliness, mental health and women’s representation. Escaped Alone is revolutionary in its construction, exploring the importance of women’s conversations with each other and their interpretation of the world around them. The idea of making women visible is central to the play, and is a theme that should be tackled more often in theatre today.

Escaped Alone is by Caryl Churchill and directed by James Macdonald. It’s on until 12 March, 2016 at the Jerwood Theatre Downstairs at the Royal Court. There is a captioned performance at 7:30pm on Tuesday 23 February and an audio-described performance at 2:30pm on Saturday 27 February.

Both photographs are courtesy of the Royal Court and credited to John Persson.

Photograph 2 shows Linda Bassett (Mrs Jarrett). She is standing alone in the middle of a dark stage. She is surrounded by two squares of copper-coloured coiled wires.