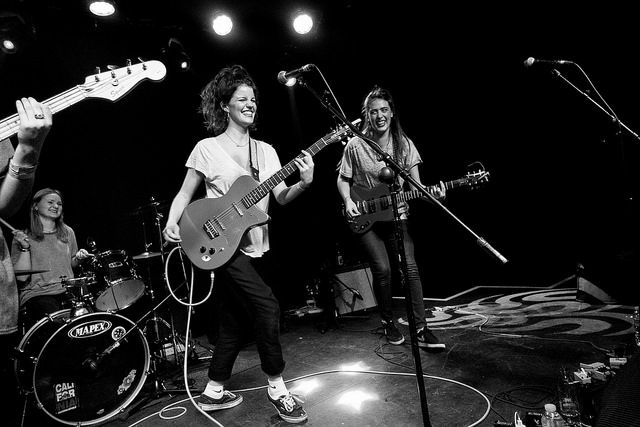 Previously known as Deers, Hinds are the all-female four-piece currently making waves in the indie music scene. After performing with the likes of The Strokes and The Libertines, and playing Glastonbury, Hinds embarked on a huge tour of Europe and America, catching the attention of music websites and magazines along the way. Their debut album Leave Me Alone is pure, unapologetic indie pop and sounds as messy and raucous as all good indie albums should. Created by best friends Carlotta and Ana when holidaying together, they quickly recruited Ade and Amber to create the girl gang you absolutely want to be a part of.

Their earlier material, such as ‘Trippy Gum’ gave fans and music critics an idea of the sort of garage pop the four-piece would be producing in their debut album. Leave Me Alone starts with ‘Garden’ and although the band have been known to cite fairly modern influences, such as The Black Lips and The Strokes, the opening track is somewhat punky and sets the ground work for the rest of the album. The tracks are extremely melodic, only interrupted by the rawness of the girls’ vocals, which work wonderfully. As we move from ‘Fat Calmed Kiddos’ to ‘Warts’ the band really get into their rhythm; each track is full of an energy that is nothing short of contagious.

Leave Me Alone is an album that goes through the motions of love: from dealing with rubbish boyfriends, to drunk texting and standing up for yourself. Though the title Leave Me Alone sends a message of detachment, as also seen in the song title ‘And I Will Send Your Flowers Back’, the actual lyrics of many of the album tracks (as opposed to their singles) suggest quite the opposite. “You’re the love of my life”, “Please don’t leave me” and “You’re on my mind” are all lyrics that appear on various album tracks, existing in sharp contrast to the album title and alluding to a softer vulnerability disguised in the midst of the woozy pop sound. This vulnerability shouldn’t be mistaken for weakness, however, as they continue to challenge stereotypes in ‘I’ll Be Your Man’, singing “I could be your baby, but I’ll be your man”; an ode to stability and comfort, yet subverting the conventional love song trope of the woman being the one needing comfort and stability. ‘Castigadas En El Granero’ is the most unpolished track on the album, but it is also one of the tracks that best represents the band. It’s raw, energetic and loud, but there’s also a sophistication to the track that confirms to us that Hinds know exactly what they are doing.

One of the best things about Hinds is how well Ana and Carlotta’s vocals complement each other, by either counteracting or emphasising, adding a whole new depth to the songs. While Carlotta sings in a languid drawl, Ana’s vocals are much more grounded. The album starts off full of the energy you would expect from garage pop – the sort of songs that make you want to dance on the tables. However, the instrumental ‘Solar Gap’ provides a lull in the album and the final few tracks, particularly ‘I’ll Be Your Man’ and ‘And I Will Send Your Flowers Back’ move towards a more mellow sound, suggesting the night drawing to a close.Though the girls may have made a name for themselves for their playful and cheeky demeanour – arriving late on stage, making late changes to the set list and, if their Instagram is anything to go by, frequent crowd surfing – Leave Me Alone proves that they shouldn’t be written off as a ‘goofy’ band. There’s a definite maturity to their sound, showing that they know where they’re at and where they need to be. Their self-belief is exactly what we need more of from girls and women in the music industry.

Though we have seen some fantastic girl bands smash their way onto the cover of music magazines and Glastonbury stages, Hinds have still felt the sexism that resonates throughout the music industry, particularly in the indie/rock genre. In an interview with NY Magazine, Carlotta stated: “Music suddenly is the first time for any of us that we felt less for being girls. Just for being a girl band, I’d never felt that before. All of a sudden we have more reasons to be judged, for sure”.

It’s this experience of sexism that inspired their motto “Our shit rules”. The male-centric music scene in Madrid which they had to fight their way through to make it outside of the city has also led to a sense of resentment when discussing their all-female line-up. In an interview with The Guardian, Ana said, “We didn’t want people to talk about us being girls…we decided that we were going to dress as boys and act as boys. It didn’t work…everybody was talking about whether we’re cute or not.”

While there’s clearly still a long way to go in terms of eradicating sexism within the music industry, there’s no doubt that Hinds are leading the way in proving that the girls can do it just as well as the guys, if not better.

Leave Me Alone features hit after hit, never failing to impress. Hinds are paving the way for new girl bands across the globe, their unapologetically unpolished garage pop combined with their disorganised, sweaty live shows create something that is exactly what we and the music industry need.

Hinds are touring the UK this month. Check out their website for more details.

The image at the top of the article is a fantastic black and white shot of band members (left to right) Amber on drums, Carlotta on vocals and guitar and Ana on vocals and guitar. Bassist Ade is just out of shot. The picture shows the band performing onstage at the Boston Music Room in 2015. They are all smiling and look like they’re having an ace time. Image by Paul Hudson, shared under a Creative Commons licence.