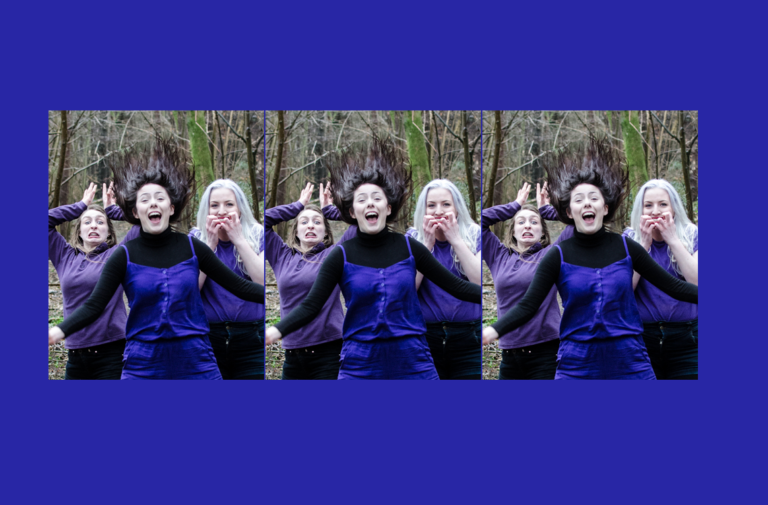 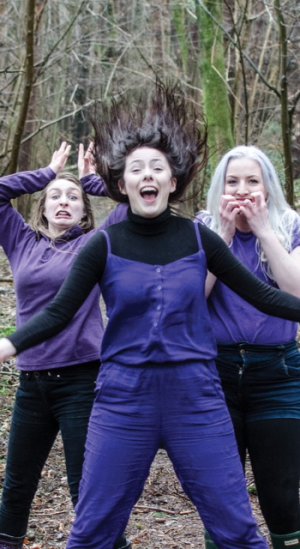 The energy levels are high for a Monday night in North London, with glow sticks, 1990s pop tunes and the exuberant Kitten Killers bouncing around to welcome their audience, shaking hands and showing them to their seats. This lively exertion continues throughout the hour of music and sketch comedy, despite some hit or miss notes.

The Kitten Killers are a three-woman sketch group, who have been gigging in London and further afield since 2013. I went to see them at the Hen and Chickens Theatre in Highbury, north London, in November 2015.

I wonder if the name Kitten Killers references the internet meme that every time someone masturbates, God kills a kitten – because it’s with unashamed glee that the trio of Fran Bushe, Kat Cade and Perdita Stott explore contemporary sexuality throughout this evening of sketches covering fan fiction, dick pics and a cavewoman who doesn’t want to shave her pubes for a man.

That’s not to say all of their comedy is about sex. What is does look at is the wider picture of sexuality, considering the social constraints and stereotypes that then feed in to an exploration of all aspects of sexuality, relationships, gender roles, and whether the object of your desire can survive as an image or a celebrity character in a secret diary, or if they do, in fact, need to be a real person. Luckily, Kitten Killers manage this with a cheeky grin and a good dose of bounce and silliness so it’s relatable rather than heavy handed.

What the group do really well is to tap into some of the struggles of many young women today and point out their ridiculous aspects in a fresh and very funny way. They understand their peers and what makes them tick, and it’s one of a very few times I’ve gone to a comedy show feeling like this actually might be comedy being written for me and my friends.

The women take contemporary ideas, subvert and play with them, and their use of music really helps their audience come along with them for the ride

Musical comedy is what they do best, really highlighting how well they work together as a team and play off each other with some exceptionally funny observations on pubic grooming throughout history. Another sketch sees the sisters of Fiddler on the Roof condemning an audience member for incessant use of dick pics. The women take contemporary ideas, subvert and play with them, and their use of music really helps their audience come along with them for the ride.

They have clearly worked to structure the show with a number of carefully connected call-backs throughout. The level of detail is admirable, but some of their linking sketches and physical comedy seems a bit misplaced or indulgent. I got lost in a couple of sketches and there’s at least one punchline that doesn’t really hit the mark after an extended set up.

The premises of all of their sketches are strong, but occasionally stray too far beyond funny or slapstick and into just plain crass, which is frustrating when compared to the care they have taken over their narrative and the well-conceived musical comedy elements of the show. Yes, there is a dark heart behind their comedy, but the conclusion of their Austen-esque sketch in which our heroines discover that riding side-saddle does indeed cause exactly what men have said it does just doesn’t seem very clever. There is a level of youthful exploration to their comedy which, in some cases, could happily be elevated and used in a more analytical way without losing the joy.

I really enjoyed watching three women not caring about sweating, wearing silly outfits and generally going for it

However, these women work hard for their art. I really enjoyed watching three women not caring about sweating, wearing silly outfits and generally going for it. They want all of their audience to come on the journey with them and get involved, regardless of gender, and, fabulously, the men in the audience are laughing as hard as the women. The relationship between the three of them as performers and writers really comes through and does a lovely job at disproving the idea that women are competitive, jealous and disloyal to their sex. It’s very apparent that they fully support each other in realising their ideas, which is wonderful to see. Their final number had been building throughout the evening, revisiting Fran’s love of fan fiction and her eventual decision (with a little intervention) to go out into the world and find real love. While, of course, we all know that we don’t need a man to find happiness in life, there is some lovely audience interaction here and their song about settling down, with their tongues firmly in their cheeks, lifts the show into a glorious ending.

Kitten Killers have a lot of potential. A more nuanced look at the feminist elements of their ideas could take this sketch group into a more sophisticated style of comedy, without sacrificing what are some very witty ideas. But, most importantly, at the end of the evening I left smiling.

Photo courtesy of the Kitten Killers. It shows three young white women photographed in the woods. All three look to be in motion with the woman on the left holding her hands above her head as if they are horns, the woman on the right holding her hands in front of her mouth as if she’s eating something and with the woman in the centre’s hair caught just as it is directly above her head in the air. The photo is repeated three times in the feature image.