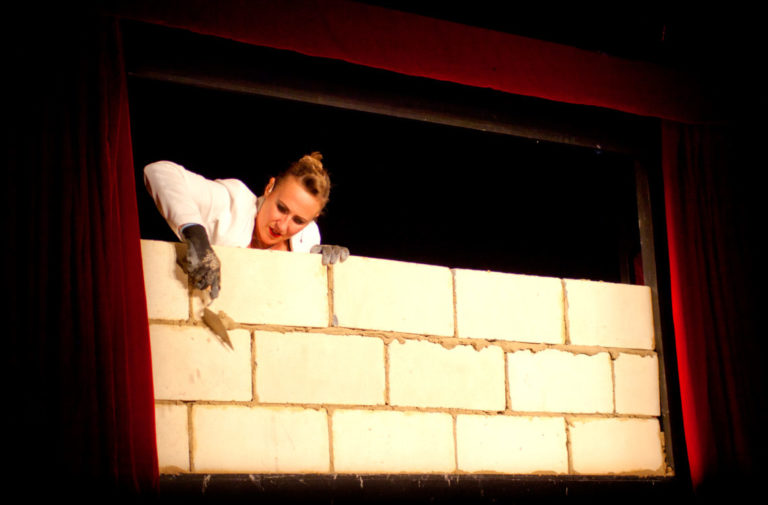 The first line of the review is an important one. You want to say something that will make an impact.

If you love all things meta, Ursula Martinez will be right up your street.

This is how Free Admission begins: Martinez comes out before the show starts and does a pre-show talk (a usual feature of her solo shows, she explains). Then the lights dim, and the show starts ‘properly’. By that point we are all aware that the whole of it is part of the performance: the ‘real’ Martinez and Martinez-the-performer both talk straight to the audience and don’t shy away from interaction. The show has barely started and already the fourth wall is well and truly broken; while watching it I begin to think on the nature of theatre and genre. Perhaps the wall she builds within the show – an honest-to-god wall, there are bricks – has something to do with that.

Ursula Martinez, born Ursula Lea, is an artist who started out in the burgeoning cabaret scene, staging comic burlesque shows at the legendary Duckie nights at the Royal Vauxhall Tavern. Previously she read theatre at Lancaster University, and both of these experiences are reflected within her work.

Even judging solely by Free Admission, you would call her genre-defying: the show is a mixture of dispassionate recitations in the form of sentences like “Sometimes, people do xyz”, “abc pisses me off”, “statistics say…” and concrete actions, like the aforementioned laying of bricks. Having said that, Martinez does not perform incomprehensible actions and call them art; she always connects with the audience, remaining watchable, whether she’s demonstrating accents, talking about her relationship or telling stories of the Spanish Civil War. She knows when to break the tension, and how to hold it.

It is a little moment of theatre gold

Martinez starts out wearing an immaculate white man’s suit with three quarter length trousers, she also has a necklace and long earrings. The blend of traditionally masculine and feminine accessories is both balanced and very much intended. That’s something that you notice often during the performance: not much is left to chance.

If anything is left to chance, Martinez’s calm poise makes it very hard to notice. Even seemingly unscripted interactions such as: “Chris, a little more light? Chris, can I have the music?” could have been pre-written. As I write this I am toying with the idea of going again, just to check if Martinez repeats certain things. For example she asks a theatre tech who is cleaning up props in the dark: “Ania, what’s your sexual orientation?”, to which invisible Ania replies “Bisexual”. It is a little moment of theatre gold. 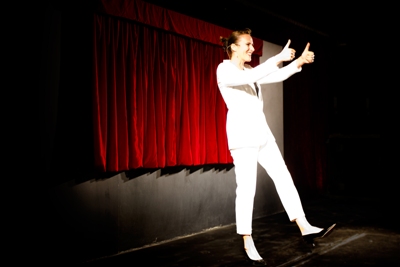 Her white suit is joined by builder’s gloves and her dressy clothes clash with working class tools. As she starts laying bricks, we initially struggle to connect this action with her words. As she begins to tell us stories and facts, we are soothed by the repetitive motion of bricklaying. The bricks don’t make sense immediately, but they build up into a bigger picture and a versatile metaphor.

She leaves her words mostly unadorned. She doesn’t force emotion, either from herself or the audience, instead allowing things to happen at their natural pace. Little by little, random titbits and anecdotes build up to a mosaic. Her irrepressible personality is visible in everything she does – she can cause laughter just by slowing down her walk or raising an eyebrow – but she lets the audience draw their own conclusions from her words and actions. Martinez’s voice is hypnotic and her humour contemporary (Game of Thrones, anyone?). She speaks of striving for perfection, investing self-esteem in social media and engaging with body image. A little bit of everything, a slice of life, which – although not linear – nevertheless tells a story.

The personal is political. Martinez deftly weaves her narrative, showing, not only telling, us how personal experiences melt into larger themes. Whether she is talking about the NHS, the Kardashians or her own artistic work, there is a web of connections between her self-interrogation and the context in which she works. Her physicality, her humanity, her politics: they are all present, like colourful fragments of the same puzzle. She connects and owns all of herself: the small, but persistent neuroses of the social media age, her aging body that gets judged more and more, her relationship, which she mentions only in passing (maybe out of respect for her partner’s wishes or because she is not defining herself by it). All that she chooses to reveal is on display, vulnerable and strange, snippets of a human life at a particular stage, location, body. It is a mesmerizing performance and she owns the room for the entire time.

The feminism of the show is implied in its very structure: a woman building a wall while telling stories; claiming a male occupation and a female perspective; getting naked, but erecting a boundary

It is worth restating Martinez’s politics: Free Admission is a feminist show. She comments on the discrimination of women, talks about the impact of performing naked on her social media following, refers to the ageism that is beginning to raise its head to her. But even more importantly this is a show in which a woman openly claims her voice, tells her stories and shows her body. Because by the time Ursula Martinez gets naked, there is no doubt that nobody makes her do it, it is a choice, she is exercising her freedom, sombre and playful all at once. The feminism of the show is implied in its very structure: a woman building a wall while telling stories; claiming a male occupation and a female perspective; getting naked, but erecting a boundary.

The strangeness of the show, its irony and self-observant wit will not suit everybody, but it left me hungry for more, curious to know if everything was planned or improvised, admiring of her control over herself and the audience.

The last line of the review is an important one. You want to say something that will make an impact.

Photos courtesy of Ursula Martinez and the Soho Theatre. The first image shows Martinez behind a wall that she is building out of breeze blocks. She has a trowel in her hand. The second image shows Martinez standing on stage in front of red velvet curtains. She wears a white suit and high heels.

Free Admission is on at the Soho Theatre until Saturday 20 February. Tickets can be bought here.