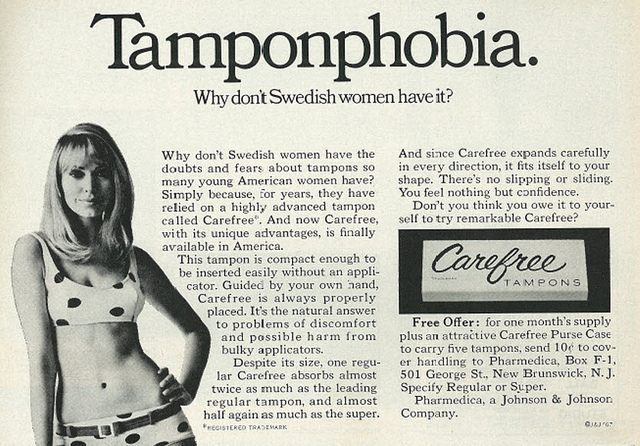 We need to talk about periods

“What’s the difference between tampons and Tampax?” the girl said. It was 2001 and I was eleven. I could hear from her voice that she was a few years younger than me, and the shadows beyond the toilet door told me there was another person there, who coughed and rubbed her foot on the carpet. “I don’t know,” she admitted. I flushed and walked out.

“Tampons are the things you stick up yourself,” I said in a bored voice, “and Tampax are those pads you use.” The girls thanked me and skipped out of the restaurant bathroom excitedly, like I’d invited them to join some sort of club. My smugness wore off the second the door banged shut and I felt hot, red embarrassment wash over me as I realised I’d made my answer up. The thrill of being a cool, older know-it-all had taken over.

Tampons have been my friend for over a decade but I don’t feel like I know them and their other pals much better now than I did when I was eleven. I’ll watch TV as a softly-spoken lady talks us through the amount of inoffensive blue liquid her pads can absorb. I cringe when my mum says “pantyliners”, and I’m acutely aware of the way I try to bury my Always under a pile of spinach and Babybels when I do my food shop, lest someone see the box brazenly sitting at the top of the trolley.

When my boyfriend and I first moved in together back in April I spent a good half a day unpacking my toiletries in the bathroom. I sort of looked forward to the first time one of us got the flu so we could try out our brand new Beechams. My shampoos and moisturisers set up camp on the open shelving above the toilet, and next to them sat the box of tampons and pack of thick, winged sanitary towels.

We were up and running. I was proud. But one housewarming guest said “Oh, great to see you’ve got your tampons on full display!” sarcastically. I felt vile. Was this one of those SIGNS YOUR RELATIONSHIP HAS BECOME TOO COMFORTABLE that I’d read about in a BuzzFeed article? When my boyfriend’s male friends dropped round, I temporarily hid everything period-related. But later, as I slid the boxes back into their dust-lined places on the shelf, I became angry. I need tampons. I need them like I need toilet roll and toothbrushes – things that are also “on full display” 24/7. I wondered why the comment had led me to feel like I was being lazy and sloppy when neither my partner nor I had any issues with the contents of our bathroom shelves.

I grew up convinced that the most AWFUL thing would be if a boy learned I was on my period. I watched movies where the female lead accidentally bumped into her love interest and – OH NO! – tampons went flying. Her secret was out. For many women periods are a cloak and dagger monthly event. I own a small pouch to stash pads in so they don’t peek out the top of my handbag while I’m paying for lunch. I hide tampons up my sleeve at work so I can smuggle them into the bathroom undetected. I’ve always said things like “It’s a… bad time of the month” apologetically to boyfriends, as if the word “period” might gross them out too much and render me forever unattractive and bloodstained in their eyes. I’ve been able to see cogs whirring as they worked out what this crazy euphemism might mean, and I’ve felt bad for not being more succinct but also resentful for not feeling able to be.

I wish I could talk about menstruation as openly as I do tonsillitis or foot cramps, but I still struggle. I feel as if I have to pretend it doesn’t happen. There’s something about showing the ‘process’ of ‘being a woman’ that isn’t acceptable – we’ve been taught to present the end product, and for some of us it’d be mortifying if our date turned up halfway through our winged eyeliner application or walked in on us shaving our legs. And, similarly, during our periods we’re still supposed to stay quiet – to make everything lovely and rose-scented and invisible until we reach the other side.

I don’t want that. I don’t want to be the girl who keeps her Maxi pads in a box in the cupboard, or the girl who says she has a slight stomach-ache when she actually has raging cramps. We have to deal with periods – let’s talk about them, too.

Sophie Jo writes a lot and cries a lot and is the queen of Disney trivia. Tweet her @notaquamarine.

The image used features a vintage advert for Carefree Tampons showing a woman in her underwear underneath a headline which says “Tamponphobia”. It is used under the Creative Commons license.