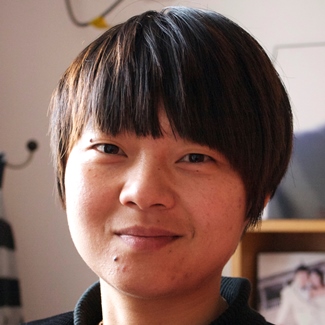 “When we come out, our parents go into the closet themselves”: interview with Sophia Luvarà

The Human Rights Watch Festival opens in London tomorrow, bringing its audience 16 inspiring and provocative documentaries and dramas from all over the world. The festival’s website gives you full listings and you can book your tickets there. 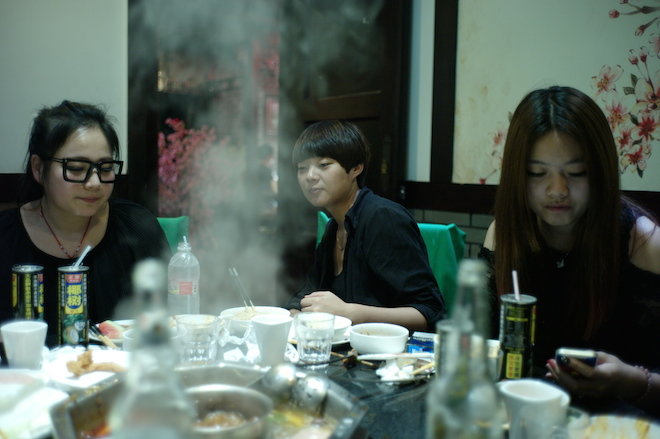 Given my personal cinematic non-fiction bias, I am excited to introduce you to filmmaker Sophia Luvarà, whose first documentary feature Inside the Chinese Closet is screening during the festival. I had the pleasure of chatting to Luvarà in a busy cafe at London’s Barbican cinema; a filmmaker at the beginning of her career, she was generous with her time and gracious in person, even though I’m sure she had answered some of my questions before.

Luvarà is Italian and before embarking on a documentary filmmaking career, she followed a very different path: having graduated in medical biotechnology from the University of Turin, she started a PhD in cancer research. But leaving her scientific past behind, she moved to London in 2007 and now recalls being enchanted by the filmmakers she met at the UK documentary film festivals: “They were travelling all over the world, having amazing life, meeting other people, following them for months.” In 2008 she attended the Documentary Filmmaking course at the London Film Academy but what she says really helped her with her new career was participating in the Documentary Campus’ Masterschool, where she gained a good understanding of the industry, learned how to develop a good story and how to tackle the financial aspects of independent documentary filmmaking.

I didn’t know that in China you could actually go to a gay club, I thought it was against the law

During the four years it took Luvarà to make Inside the Chinese Closet, she also shot a couple of documentary shorts: one about a group of people of African descent in Italy who stand up to the local mafia and one about Palestinian women living in Israel embarking on digital literacy courses. In 2009 she went travelling in China, hoping the excitingly big and diverse country would provide her with an interesting story to tell. After two months of living in Shanghai, she made some local friends who took her to gay clubs, which she found an eye opening experience: “I didn’t know that in China you could actually go to a gay club, I thought it was against the law”.

Her film follows two characters (Andy and Cherry), participants in China’s thriving underground ’fake marriage‘ market, where lesbians and gay men seek spouses of the opposite sex to marry, mainly to appease both partners’ families. When talking to the Chinese people who frequented gay clubs, and still looking for a story for her film, Luvarà realised that the phenomenon of pretending to have an opposite-sex partner was huge; an endless number of gay men were approaching her and asking to take a photo with her to show to their families so they could boast about a “new girlfriend”. She subsequently discovered the world of underground matchmaking services and decided that this efficiently organised system of arranging marriages of convenience merited a film. 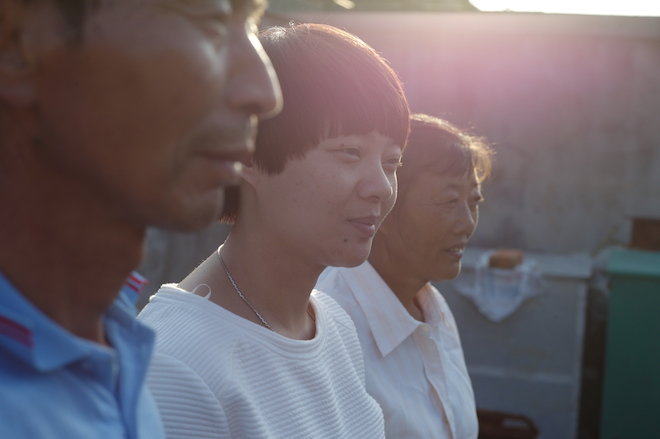 When I commend Luvarà for her balanced approach of having a gay man (Andy) and a lesbian (Cherry) as her two main characters, she surprises me by saying that she had aimed for just one character and that Andy was her original protagonist. She wanted a personal, strong story rather than a journalistic piece (“jumping from one character to the other”). However, when she met Cherry she couldn’t resist her charisma. “Did Cherry hijack Andy’s film?” I ask. “She did, and I’m very happy that she did”, laughs Luvarà, “as she’s amazing and her family is amazing”.

What Andy and Cherry have in common besides the arranged marriages (in Andy’s case still waiting for a partner, while Cherry is already negotiating being married to a gay man who we never meet) is the pressure from their parents to “give them” grandchildren. Cherry faces the difficult task of asserting to her mother she wants to adopt rather than bear a child herself. Andy makes perhaps too close contact with the murky business of illegal trade in newborn babies; “how can selling a baby be not risky?” a woman on the phone asks him matter-of-factly, answering his question about how safe the transaction is. 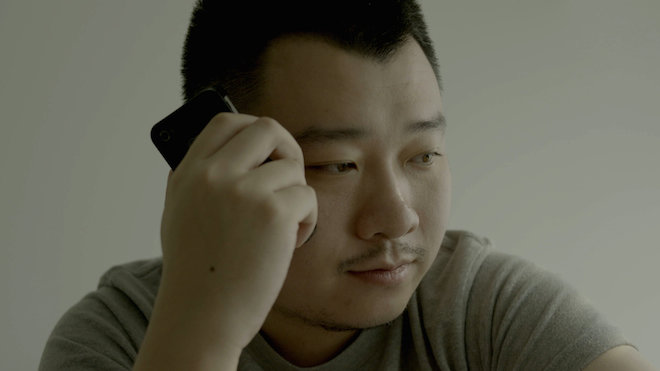 In terms of access and trust building, Luvarà praises her Chinese researcher/interpreter-turned-producer Lilian Wu Jingyang. She was very much involved in the process, from the research phase to shooting: “She really did understand what I wanted … she knew what I wanted to say, I didn’t even need to spend too much time to explain things to her.” Younger Chinese people speak some English but Wu was especially helpful with Cherry’s parents who feature in the film a lot. Andy’s father remains a disembodied, controlling, authoritarian voice on the phone.

Most of the four years it took to make the film were spent building relationships and becoming friends with the protagonists. Luvarà hung out a lot in Andy’s flat and with his friends, “at some point he met my family on Skype,” she says. That is something that really paid off when we see how comfortable Andy and Cherry are with Luvarà behind the camera, both when they are going about their business and when sometimes they address her directly, joking with her.

Luvarà admits that the most challenging thing about the process was finding the people who would be willing to open up on film. Early in her research she realised how few people are openly gay in China: in Shanghai, a city of over 23 million people, she was always being given the same two or three names when asking for contacts. What I found most fascinating about Inside the Chinese Closet is that most parents know their children are gay but still pressure them to go ahead with fake marriages, wanting to keep up appearances at all costs in fear of losing face and also craving grandchildren. One of Andy’s friends hits the nail on the head when he says over dinner: “When we go out of the closet, our parents get inside it.”

Documentary makers don’t like the word ‘learning’, they don’t want to ‘teach’, they want to ‘show’

After a UK production company backed out of the original co-production (Luvarà remarks that in the UK funding for an independent, one-off, authorial documentary with subtitles is “no-no-no way”), she was funded by the Dutch Film Fund and Dutch Media Fund and the collaboration went so well that she wants to make her new film with the same team. Her new project is in its early stages so she doesn’t want to reveal very much but it will be based in Italy. Inside the Chinese Closet will soon be on limited theatrical release in the Netherlands and later broadcast on Dutch TV, where the viewers are used to subtitles. Meanwhile, in Europe the film will be showing at various LGBTQ+ film festivals, including the upcoming London BFI Flare, which makes Luvarà happy.

Sharing how she is sometimes asked about her reasons for making the film, given she’s straight and not Chinese, she explains that she sees the universal theme of the relationship between parents and children as the core of her documentary, but the other layers: life in contemporary China, LGBT issues, having children, the black market in babies, are very important too. “Documentary makers don’t like the word ‘learning’,” she smiles, “they don’t want to ‘teach’, they want to ‘show’”. Luvarà begs to differ: she believes that if you can learn something, it means a documentary is good.

Towards the end of our chat Luvarà expressed her enthusiasm for film Q&As, so if you want to ask her any more questions after watching her debut feature do come along to one of the screenings listed below. And if you’re lucky and scroll to the very bottom, you may win a pair of tickets.

You can catch Inside the Chinese Closet during the HRW Festival on 13 and 14 March, as well as during the BFI Flare Festival from 18 to 20 March.

Win tickets to see the film!

To win a pair of tickets to one of the HRW Festival’s screenings (13 or 14 March, pick one and let me know), please email film[at]thefword.org.uk answering the question:

What dates does the Human Rights Watch festival run in London this year?

I’m waiting for your replies until the end of today. Good luck and see you at the Festival!

All pictures are stills from the film, used with permission.
First picture shows three young Chinese women, sitting around the table full of food. One on the left has long hair in a loose pony tail and glasses in square thick black frames. One in the middle has a short haircut with a fringe and one on the right has her long black her down, she is checking her phone. There’s steam rising from the food between two women on the left.
Second picture shows three people standing in a row, with their right profiles turned to the camera. The person in the middle is a young woman with a short haircut with a fringe and two people on her both sides are an older man and a woman.
Last picture is a portrait of a young Chinese man who’s looking off camera to the right, holding a black mobile phone against his right ear, perhaps listening to someone talking to him on the phone.

Editor’s note: the headline of this post was changed on Sunday 13 March 2016, to remove the words ‘PLUS COMPETITION’ as the competition was closed.