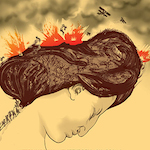 If most comics are about superheroes, Kate Evans both breaks and daringly confirms that norm in her loving depiction of the life and death of the courageous, blazingly intelligent and unbeaten socialist Rosa Luxemburg (1871-1919). There’s only one, in Evans’ words, “tiny, limping, Jewish girl” among comic protagonists, just as among late 19th century Polish socialists. Red Rosa, both theorist and practitioner of revolution, is absolutely a superheroine for our times. Dubious about some of her contemporaries’ commitment to suffrage, which she saw as predominantly a campaign for wealthy women, Luxemburg may not have written extensively about feminism, but, with her many lovers and absolute commitment to freedom, she certainly lived it. 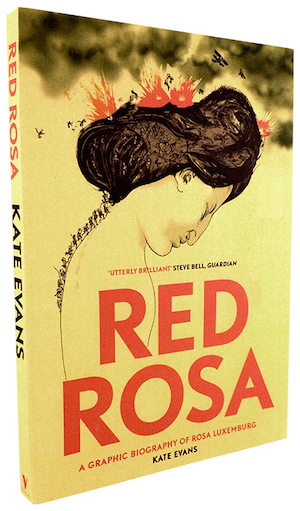 As baby Rosa is born in Zamość, Poland, Evans begins her story far from her, in the Paris Commune of 1871. It is the ideal start for the story of the woman who would speak at congresses and conferences of the Second International, study in Switzerland, work in Berlin and travel to London and Moscow, as well as back to Warsaw to observe the outcome of the 1905 coordinated workers’ strike. Taking a stand against nationalism, religion, conventional bourgeois femininity (as Evans has explored) and anything else she could oppose, Luxemburg, as portrayed by Evans, is just as much the child of the distant Commune, as she is the child of her parents Lina and Edward.

As the story of the child with “fire in her soul” (Evans’ phrase) takes shape, so does Evans’ graphic storytelling. Early on, there are clever, engaging explorations of the tenets of socialism using cutlery, a boiling kettle and a dandelion clock; these are, however, sometimes overwhelmed by the volume and complexity of argument that Luxemburg generated in her lifetime (there’s a detailed set of notes at the end for readers who want to consult Evans’ sources). Luxemburg’s ideas about capitalism and imperialism are increasingly, and wittily, expressed through the behaviour of her cat, Mimi. But as her life and large historical events become more entwined, so the images break out of their grid and take over pages: two patchwork quilts show the lead-up to the 1905 strike and Luxemburg’s development of revolutionary theory from her research. That quilt then covers the bed where she makes love to her fellow revolutionary and life partner Leo Jögiches.

When she is sent to prison during World War I, unities of time and space are shattered into fragments that become a kind of release for both Luxemburg and Evans, as Luxemburg – writing a letter from the prison yard – dreams of floating into the sky, true to her ultimate ideal of freedom. It’s a touchingly peaceful and ecstatic image that is revisited when Evans depicts Luxemburg’s murder at the hands of the Freikorps, an echo that keeps her spirit alive. On the penultimate page of the book, her identification with the blue titmouse is translated into the Twitter logo: a direct challenge to the reader to spread Luxemburg’s ideas.

A ten-volume graphic novel series would still only touch on the high points of her life, and Evans creates a sense of satisfaction without overstuffing

Evans’ striking pairing of word and image to tell Luxemburg’s story is so perfect that it seems surprising that no-one has thought of it before. Luxemburg’s best-known Berlin years (1898-1916) coincided not only with the great reinvention of mass left politics, in which she played a crucial role, but with the expression of that politics through a newly dynamic visual art. Evans refers to Käthe Kollwitz’ famous woodcut ‘In Memoriam Karl Liebknecht’ in a panel showing the mourning after the brutal putdown of the Kiel naval rebellion in 1918, and earlier uses Eisenstein-style film strips to evoke the Bolshevik revolution.

Her use of pen-and-ink wash is softer than the sharp angles and starkly heroic images associated with Soviet Constructivism, perhaps a nod to Luxemburg’s critique of Leninism. The slightly disproportionate heads with closely observed, almost photo-realist expressive faces, evoke instead the ideals of the New Objectivity, the art movement that surrounded Luxemburg in leftist Berlin. It was a movement at once satirical and realist, a politically engaged depiction of the whirl of Weimar life, best known through the caricature-ish work of Otto Dix and George Grosz. Evans draws on the rich tradition of cartooning famous figures, even showing a cartoon of ‘Bloody Rosa’ from the mainstream German press. Luxemburg, notes Evans, “uses her pen to draw pictures [in words] that are as vivid as the images of any modern photojournalist”.

Inevitably, for a book about such a prolific writer and activist, the short quotations, supplemented by more detail in the Notes, leave the reader wanting more – but I think that’s part of the book’s plan. Luxemburg had a clear and capacious mind, internationalist and pacifist, as capable of addressing Polish-speaking miners in Upper Silesia as negotiating the old boys’ club of the socialist party politics. A ten-volume graphic novel series would still only touch on the high points of her life, and Evans creates a sense of satisfaction without overstuffing. There’s room for Rosa the lover as well as Rosa the fighter, and in fact the novel argues that they are one and the same. It’s a bold redefinition of biography as well as of the comic: not so much a superhero as a total human being who made what society perceived as her imperfections – tiny, limping, Jewish and female – into her strength as her source of solidarity with all who were oppressed.

Red Rosa was published by Verso in October 2015.

You can listen to a podcast in which Sophie talks to Kate Evans about the book itself as well as the life and times of Rosa Luxemburg.
The podcast is part of the London Review Bookshop’s celebration of women graphic novelists in honour of International Women’s Day on 8 March. Go to their website to learn about other events in the series.

The image is a cover of Kate Evans’ graphic novel Red Rosa, used with permission. It has a drawing of a customised right profile of a woman, her head is lowered, she has small figures marching up her spine and bombs exploding in her thick black hair, gathered on top of her head. There are dark clouds and planes over her head. The lettering: “RED ROSA, A GRAPHIC BIOGRAPHY OF ROSA LUXEMBURG, KATE EVANS” “‘Utterly brilliant’, Steve Bell, Guardian”.

Sophie Mayer is proud to be a tiny, limping, Jewish socialist, and the author of Political Animals: the New Feminist Cinema, out now from IB Tauris.