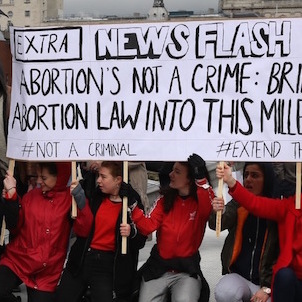 Why we blocked Millennium Bridge

This is a guest post by The Bridge Club, a group of activists fighting for the right to decriminalised abortion across the UK. Follow them on Twitter @bridge4abortion Did you know that a 21-year-old woman in Northern Ireland was recently convicted for taking abortion pills in her own home? Maybe you’re not surprised – it’s relatively common knowledge by now that abortion laws in Northern Ireland (and the Republic) are dangerously restrictive. Perhaps you’d be more surprised to hear that last year, a young mother in Durham was imprisoned for two and a half years for inducing her own miscarriage with medication bought online.

Maybe you already know about Abortion Support Network, an incredible organisation that gathers funds and resources to assist Northern Irish people to travel to the mainland UK to access safe and legal abortion services. Did you also know that every single one of the 12 people a day that cross the Irish Sea to do so are forced to pay privately for this medical care, despite paying the same taxes to NHS as the rest of the UK?

I knew these things. I was furious about them. For months, I’d been speaking angrily about them with other women I knew. Then, in early February, I went to the launch of BPAS’ campaign ‘We Trust Women’, calling for the full decriminalisation of abortion across the UK. It was there that I found out about the 1861 Offences Against the Person Act, the law that still currently circumscribes UK abortion law. BPAS comments:

The 1861 Offences Against the Person Act (and equivalent common law offences in Scotland) – passed before women could vote – threatens the harshest punishments for self-induced abortion imposed by any country in Europe today, with the exception of the Republic of Ireland.

Even countries such as Poland, where abortion is highly restricted, do not prosecute women for self-inducing abortion.

The 1967 Abortion Act did not overturn this law, but made abortion lawful if 2 doctors agreed a woman’s mental or physical health would suffer if forced to continue her pregnancy. It did not extend to Northern Ireland. But even where it applies, abortion is not a choice a woman can make for herself, but a decision which must be made on her behalf by doctors.

I couldn’t believe that people’s freedom to make choices about their reproductive health was still controlled by a law written in the 19th century. I couldn’t believe that people who didn’t want to face medical stigma, like trans people or sex workers, or those who are frozen out of the healthcare system, like the homeless, or those who lack the funds to travel to a certified abortion clinic, could face prosecution. Why should anyone, with it becoming easier than ever to access safe and effective medications to induce abortions online, face the threat of prosecution for taking decisions out of doctors’, and into their own, hands?

News flash: abortion’s not a crime, and UK abortion law needs to be brought into this millennium. Armed with a sign saying exactly this, me and six other pro-choice activists marched to the middle of Millennium Bridge last Saturday afternoon, handcuffed ourselves together, and began to shout. “21st century laws for 21st century women!” “Extend the Act, Repeal the 8th, Irish women will decide their fate!” “What do we want? Decriminalised abortion! When do we want it? Now!”

We imagined ourselves standing on the bridge between Ireland and the mainland, our sisters such a short journey away over the Irish Sea, yet denied their rights as UK citizens by the NHS. We stood in solidarity with groups like Abortion Rights Campaign, fighting for the repeal of the 8th Amendment, the law which denies citizens of the Republic their right to abortion even in the cases of rape, severe foetal abnormality and incest. We thought of Feminist Fightback, who on the same day were marching in Stratford to block anti-choice campaigners from reaching a nearby abortion clinic, where they routinely harass those attempting to enter (just one of the many reasons why one might choose to abort in the safety and sanctuary of their own home).

Contrary to popular opinion, abortion law in the UK is stuck in the 19th century and lags behind many EU countries. While Trump calls for women in the US to be “punished” for having abortions, this is the current reality for those being prosecuted in UK courts. The UK requires a mass movement for decriminalised abortion; the 1967 Abortion Act needs to be extended to Northern Ireland, and while Stormont resists, Northern Irish citizens deserve to be treated by an NHS they pay for. Let’s bring UK abortion law into this millennium, and demand 21st century laws for 21st century women. Join us on the bridge.

The image is of The Bridge Club direct action on Saturday 16 April 2016 on Millennium Bridge, London. It shows six women, wearing mainly red, squatting and holding a banner in their extended hands. The banner reads: “16 April 2016. Extra. News flash: Abortion’s not a crime. Bring the UK’s abortion law into this millennium #notthecriminial #extendthelaw”. There are other people standing around the activists, mainly men in black, one of them holding a large black and white umbrella.