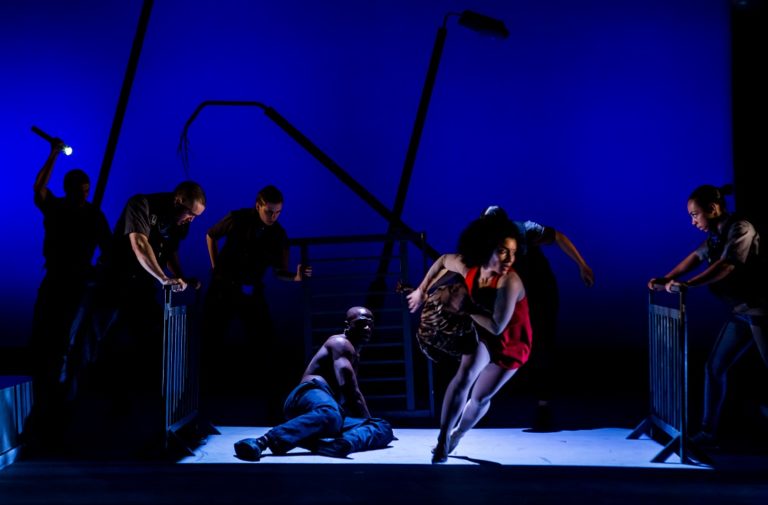 Circus in the urban jungle

The Jungle Book is a new family production from Metta Theatre, directed by Poppy Burton-Morgan with choreography by Kendra J Horsburgh. The show is touring the UK before coming to the London Wonderground at the Southbank Centre in August. I saw the show on its first night at the Theatre Royal, Windsor.

Based on some of The Jungle Book tales written by Rudyard Kipling in the 1890s, Burton-Morgan has cleverly updated the story so instead of the Indian jungle, we are in a modern UK city, with a pack of wolves represented by youths on skateboards and the trees of the jungle replaced with lampposts. Street dance and circus are woven through the show, with the story principally told through physical performance with little dialogue.

The gender of two lead characters has been switched with both Mowgli (the “man cub” of Kipling’s stories) and Bagheera (a anthropomorphised panther) played by women. It’s interesting how little this affects the story, especially amongst all the other changes that the company have made to the original. As has been written about recently, society has a tendency to default to male when no gender is specified, particularly when it comes to animals; this play ably demonstrates that the plot doesn’t need these characters to be male to work.

There is an aerial hoop duet which is breathtakingly beautiful

The physical approach that Metta Theatre have taken to The Jungle Book works well when applied to the relationships between the characters. There is an aerial hoop duet in the second half which is breathtakingly beautiful as it shows the growing friendship between Mowgli and Vee, a vulture. However the style works less well with some of the more complicated bits of plot. Without a programme with a synopsis of each scene I would not be able to follow the twists and turns of the changing power balances between the characters and the development of Mowgli as she grows up.

All the cast have an impressive level of physical skill, although their acting ability and amount of stage presence is a little more mixed. Natalie Nicole James as Mowgli is excellent. She embodies the innocence and good-heartedness of the character, and has some extraordinary dance and circus skills. Ellen Wolf as Raksha and Matt Knight as Akela use their street and breakdance to create a feeling of a gang of friends within the wolf pack. Kloé Dean as Bagheera has a power to her dancing and is very charismatic on stage. And I really love Nathalie Alison’s performance, each of her characters, Kaa and Vee, have a specific physicality and in the role of Vee particularly her ability to combine the casual movements of the character with her strong aerial skills is amazing.

Stefan Puxon as Baloo is a great dancer and has very good comic timing, but his spoken word sections don’t quite have enough conviction behind them for me to really connect. Similarly I feel that Dean Stewart as Shere Khan isn’t directing quite enough of his performance out to the audience, so the threat of his character doesn’t hit home as well as it might have. However, the range of skills shown by all cast members is fantastic, and it’s great to see a cast that actually reflects the population of the UK in terms of gender and race up on stage, which surely must be a good experience for the younger audiences that this production is for.

There are some really lovely sections of the show using props. In earlier scenes the toddler Mowgli is represented by a child’s red snowsuit which is manipulated by the rest of the cast, and this bit of puppetry works well. The gang of wolves use their skateboards in interestingly choreographed ways to show their protection of Mowgli. Suit jackets represent ‘suits’ in the city, and one section where Mowgli is forced into a suit jacket in various ways works nicely. And near the end, five performers playing police cleverly manipulate torches in a blackout, adding texture to the staging.

Another aspect of the show that I like is the use of a community chorus of local young people. They are well integrated into the show, and I enjoy seeing them have the opportunity to demonstrate their skills to an audience.

In addition to the difficulty of telling a complicated story though physical theatre, there is something about the staging and direction at this performance which I think makes it a bit more difficult for the audience as a whole to connect to the show. It could be that the audience of the Theatre Royal, Windsor are unused to the urban art forms that are part of the performance, that the sound levels aren’t quite high enough or that a few too many scenes take place towards the back of the stage. It could even be something about the shape of the theatre itself which creates a psychological distance between us and the action on stage. It is only at the very end when the whole cast encourage the audience to join them in dancing that there is the indefinable but key sensation of feeling you are part of a live event. I hope that later in the tour when the cast have settled into their roles there will be more of that live energy right from the start.

All in all this is an enjoyable and generally accessible production which manages to update a classic and sometimes problematic story for a modern audience. It’s great to see a young, talented, multi-racial cast on stage showing the highest levels of skill in circus and dance. And it’s really good to see so many strong, talented women leading the way in new UK theatre.


The Jungle Book is curently at Exeter and will be going to Malvern, Dundee (there is a relaxed performance on Saturday 14 May at 2pm and a visual story is available), Eastbourne, Winchester, Oxford, Cork in the Republic of Ireland and the Southbank Centre in the coming months.

The first image shows Dean Stewart as Shere Khan and Natalie Nicole Jones as Mowgli. Mowgli is wearing red and has just snatched something from Shere Khan and is dashing away from him as he lies on the floor. The lighting around them is very dark and a few people lean over barriers to look at them.

The second image shows Nathalie Alison as the vulture and Natalie Nicole James as Mowgli. Mowgli and the vulture both wear red and are hanging off a red hoop, with a blue background with leaning lampposts behind them. The vulture hangs upside down from the top of the hoop. She is holding on to the leg and shoulder of Mowgli who is lying on her back in mid-air with her head and arms thrown back.