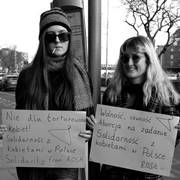 Keep your rosaries off our ovaries! Defending reproductive rights in Poland

This is a guest post by Hanna Mroczek from Dziewuchy Dziewuchom Irlandia, Irish chapter of international activist group protesting the current developments around reproductive rights in Poland

Poland is slowly moving towards nationalist and right wing tendencies. Polish Catholics are feeling “oppressed”, because of the drive for equality of some of their compatriots they don’t feel worthy of the name, and as a result are pushing for radicalisation of many aspects of social life.

First, the ruling party Law and Justice is against the Council of Europe Convention on preventing and combating violence against women and domestic violence. The Parliament ratified the convention in April 2015 but as authorities claim it goes against “traditional Catholic values”, it hasn’t been implemented.

Second, unlike most European Union countries, Poland does not legally recognise any form of same-sex unions. The government reserves the right to forbid couples from getting married abroad, doesn’t accept valid marriage certificates and makes it more difficult to obtain citizenship for children of same-sex couples. All that wasn’t enough. Now they are making moves to threaten women’s reproductive rights, their right to health and bodily autonomy.

Right now in Poland we have a kind of “trade-off” regarding abortion rights. Abortion is legal only in three cases:

1. When the woman’s life or health is endangered by the continuation of pregnancy;
2. When the pregnancy is a result of a criminal act;
3. When the fetus is seriously malformed.

However, lawmakers also introduced a “conscience clause”, where doctors are allowed to refuse medical treatment if it’s in disagreement with their “moral compass”. Furthermore, current law doesn’t require such a doctor to indicate an alternative healthcare provider, leaving women stranded, going against the clock to find a doctor and be allowed legal abortion.

This situation has led to serious human and patient rights’ abuses: from harassment of raped girls to the cases which rendered women sterile because of refusal to provide abortion or where babies were born which were never going to survive outside the womb. All of those instances qualified for legal abortion, but choice was taken away from women and so in some cases they were forced to see their babies die an agonising death. If abortion is murder, as pro-life activists like to call it, then I don’t know what kind of sadistic satisfaction they have in such situations.

Currently, a pro-life organisation is collecting signatures under a draft law banning abortion in all circumstances apart from when there is an immediate threat to woman’s life. The bill proposes to introduce a new crime, “prenatal murder”, and punish women and healthcare providers who terminate pregnancy with up to five years in prison.

At the moment, Poland has one of the lowest maternal mortality rates in Europe, at 3 per 100,000. That’s something to be proud of! However, if we look at child mortality, the numbers are grimmer: 4.5 per 1,000. To translate it into real-life numbers: as it’s estimated that 360-380,000 children are born in Poland every year, it means that 1,620 infants die every year, and that around 10 women die in or around childbirth.

Every life lost is one too many.

While those deaths occur not only due to the abuse of women’s rights, the numbers do beg the question why the Polish government is so fixated on saving a fetus when there is clearly much to be done in saving already born children and grown-up human beings.

The legislation has been now widely supported by politicians from Law and Justice party, including its leader Jaroslaw Kaczynski and prime minister Beata Szydlo. The Polish Catholic Church issued a special Pastoral letter supporting “Stop Abortion!” initiative that was read in every church in Poland. The current government is under constant pressure from the Church to introduce legislation abusing and restricting rights of women, non-binary people and other-than-heterosexual relationships.

As a result of this situation, a social activist group emerged – Dziewuchy Dziewuchom. Although only set up on 1 April 2016, the group already has more than 100,000 members and supporters. Polish women from around the world are organising protests and manifestations, anything that is in our power to stop this from happening.

We are working alongside various groups such as Ratujmy Kobiety (Save the Women), not only to stop the change in legislation but also to abolish the “conscience clause” and maybe even liberalise the current abortion law.

We are fighting so that women’s right to life, health and bodily autonomy is respected and protected.

The picture is courtesy of Dziewuchy Dziewuchom Irlandia. It was taken during a pro-choice demo outside the Polish Embassy in Dublin, Ireland on 9 April 2016. It shows protesters on the pavement, holding placards with slogans: “Keep your laws off my body”, “Solidarity with Polish Women” and similar.

Editor’s note: this post was amended on 29 April 2016 to remove the reference to hydrocephalus as a condition that causes an agonising death of a baby shortly after birth, which was inaccurate. – ANIA

Editor’s note: the link in this post to the group Ratujmy Kobiety was amended on 1 January 2020 as it was no longer owned by the group. The new link is to the group’s Facebook page. – GENEVIEVE