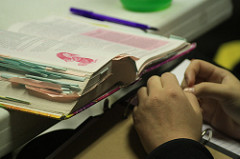 At work I came across a passage in an English language textbook. The text was called ‘High Horse’s Courting’ and describes how ‘in love’ a boy is with a girl and how he plans to steal her and marry her. According to the boy, the girl likes him too, she just has a strange way of showing it – by completely ignoring him.

The text was, to put it mildly, quite fishy for a modern textbook. I started looking at another English textbook to see if it too policed what boys and girls should be like. There appeared to be major differences in one area: clothes.

Unsurprisingly, men say things like: “The latest fashions are not my cup of tea. I prefer classic clothes that you can wear anywhere and that are never out of fashion…” and “I like ordinary clothes. I don’t want to stick out in any way. My clothes should be soft and comfortable and not too expensive…”. The girls are allowed to love fashion and see their clothes as part of their identity. In one scenario, a boy is told by a girl that if he really liked her he wouldn’t dress the way he does. The girl hands the boy clothes to try on which look exactly like the clothes that he already wore but instead are designer pieces. Every time the boy questions the clothes the girl simply says: “if you really liked me…” until the boy finally gives in. The stereotypical “women are controlling, materialistic bitches” theme is hardly subtle.

Another story concerns two boys, Jeff and Callum, who are out shopping. Callum is delighted with the new clothes he tries on but his friend, Jeff, claims that: “something’s not right […] I know what’s wrong. You look just like a girl!” while the shop assistant walks by and tells them: “that’s because you’re in the ladies section…”. This scenario serves as an active reminder that boys should dress one way and girls another and if you do not do what is expected of you, you are a joke.

The ‘cool’ boys are not interested in clothes but what about the boys that are? In the textbook the boys who do show an interest in clothes are simply presented as the stereotype of a gay man. Michael and Steve work at a big department store. They’re very flamboyant with trendy clothes, styled hair and facial hair. They’re presented as ‘camp’ and their stance and body language are different from the depictions of the men who do not care about their looks or their clothes. The message is quite clear: only gay guys care about clothes, and gay guys are ‘camp’.

So what about the girls? I can’t understand why a piece called ‘Top Model: A day in the life of top model Nikita Newman’ was picked for educational purposes. We meet Nikita, who explains her busy day as a model, starting by describing her breakfast: “Fresh pressed orange juice, wholemeal toast – no butter, a cup of black coffee and a small bowl of fresh strawberries”. After that Nikita states things like: “I’m still hungry but Katie pushes me into the shower” and “9.30: At last – we’ve finished! The designer is very pleased. ‘You were wonderful, darling!’ he gushes as I struggle back into the coat and head for the trailer. I’m longing for a hot cup of tea and a chocolate biscuit or two. I get a cup of tea but no biscuits. ‘Mustn’t put on weight’, says Katie. She lets me have some grapes and a banana instead”. Is it really necessary to focus on constant dieting in a text that is aimed at teenagers? Nikita goes on to say that: “The designer comes and shouts at me. My skin looks awful and my bottom is too fat” and “I ask the taxi to stop at Starbucks where Katie buys me a skinny latte and a cheese roll” . Lastly Nikita states that: “I feel really faint and hungry but sparkle anyway”.

So, what are we teaching young people? That clothes are for girls and for gay men and that it’s better to faint but “sparkle” than to eat a proper meal.

Elin Weiss has a Bachelor’s Degree in Psychology and a Master’s Degree in Women’s Studies from University College Dublin. Elin’s interests include the sexualisation of women and girls, gender stereotypes and stereotypical portrayals of women and men in media. Some of Elin’s previous work can be found online at: XY-online, FWSA (Feminist and Women’s Studies Association), Sex Roles and Metapsychology Online

More on this topic from Elin:

The image used shows a pile of books and is used under the Creative Commons license.