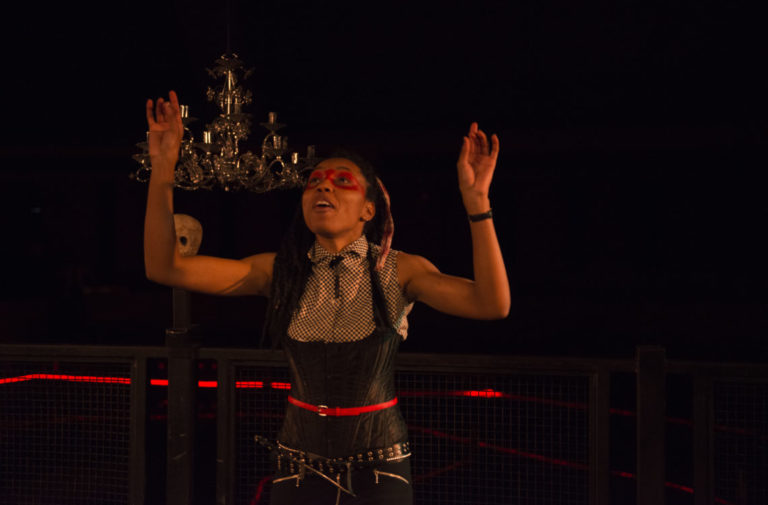 Gender-swapped death and debauchery in The Revenger’s Tragedy

Thomas Middleton’s The Revenger’s Tragedy is Elizabethan theatre at its most grim and debauched: rape, murder, adultery, deceit; it’s as if every Shakespearean villain decided to get together for a tournament of evil. However, the extremity of the violence, paired with the convolutions of the multiple revenge plots, means it also reads a bit like a farce. The Em-Lou Productions gender-swapped, goth-meets-steampunk version which recently played at The Rose in London takes advantage of this satirical edge and balances the indulgence of sin with mockery of the same.

The play follows, in this version, the machinations of Vindice (Ani Nelson) as she seeks to avenge the death of her lover, who was poisoned several years previously by the Duchess (Deborah Kearne) when he chastely refused her advances. Aided by her sister Hippolito (Brittany Atkins), who has been climbing the ranks at court, Vindice, in disguise, enters into the service of one of the Duchess’s daughters, Lussurioso (Sophia Hannides), who wants help seducing Vindice and Hippolito’s own chaste brother, Castiza (Alex Enmarch). Still following? From this foundation, various other schemes, double-dealings, and seductions build on top of each other relentlessly. It’s easier to follow the crowded house of plots and sexual exploits in performance than in synopsis.

What’s interesting is the direction this leads the actors and the audience within the gender-flipped world and what it underscores throughout the performance. In the world of this production, it is the women, not the men, who are the vicious, powerful, determined, entitled, lustful and crucially vengeful figures who drive the action. The men are the ‘weaker sex’: easily misled innocents whose value lies in their ‘purity’ and whose only card to play is that of their sexual favours. Gender-swapped productions inevitably highlight the sexual power balance and gender roles in the text, and by extension that of the playwright’s world, but in an exaggerated tragedy like Revenger’s, performed as in this production, this stands out in bold.

It’s a joy to see a play full of women exploring the variety of villains – canny or stupid, lustful or greedy – for whom men are simply either inspiration for revenge or entertainment. Not, of course, because this is a good idea in real life, but because it is hardly ever seen on the stage. Roles for women, especially in classic theatre, are so often based upon their love lives, victimhood, or motherhood. Villainy, if nothing else, is very proactive and very selfish. It’s difficult to imagine a straight play in which the opinions of men do not matter to almost every woman on stage; and it’s illuminating to realise that this is a fundamental and often invisible element in swathes of male characters.

It’s also intriguing to see men defending their purity and virginity; where it is they who are desperate for the attention of a particular woman, or throwing themselves at the powerful women around them, seeking to gain their protection by any means necessary. Suddenly it is the men running around shirtless, in a very deliberate costume statement about their status as objects, whose lines are exclusively about purity or frustrated desire, men who die rather than live ‘debased,’ and about whom many flippant and disparaging general comments are made – all they want, according to one wit, is “fair skin and new clothes.”

What’s fascinating about the performances in such a heavily gendered play is how the actors interpret the gender-swapped roles. I particularly noticed that the women usually played bold sexual hungers in a feminine way, while their violence overall read as masculine. This was thrown into relief by how the men played their weakness and sexuality in a very feminine way, often even girlish. This interpretation (both mine and the actors’) itself is of course heavily coloured by what our culture tells us is masculine or feminine behaviour. We have an often represented idea of what sexually assertive or sexually passive women look like – for example if they make eye contact or merely glance coyly up from the floor only to look away again. ‘Aggressor’ and ‘victim’ are also often behaviourally coded as ‘male’ and ‘female’, for example taking up physical space versus seeming small as possible, speaking loudly and low-pitched in power and breathy and high-pitched as supplicant. Dissecting this further, I wonder what female-coded violence would look like, and if there even is a way to imagine it as anything other than copying the male-coded violence with which we are surrounded. Violence is fundamentally about control – regaining or taking control in a situation where the person in question feels too subject to outside power. Our society has for centuries raised women to be accustomed to the idea of being subject to the power of others, men are raised to expect power. Obviously there have been plenty of powerful and violent women in the history of the world, but is it possible to categorise the ways in which that was manifest as masculine or feminine?

The question holds for male-coded oppression, too. How would one perform male-coded concern with purity, virginity and sexual innocence? The obsession with virginity in our world has everything to do with the history of women as chattels and the certainty of paternity, often communicated through religion. Fundamentally, the underlying ideology is the same: women are for making babies and babies are for passing down male power. Again, there have been plenty of men who value virginity, often within the confines of religious belief, but their choice doesn’t fundamentally affect how they are perceived as marriageable or valuable within the social structure.

So when we create an alternate world in theatre, where women take the role of oppressor, is that inevitably a copy of the patriarchy, or are there ways to imagine other forms of oppression? What could a violent matriarchy look like? How would a second-class population of male-bodied people behave around their oppressors? While this production certainly inspires these questions, it does so by holding a mirror up to the patriarchy, rather than aiming to create a whole new world.

In this mirror world, the cast as a whole are to be commended. Firstly, for their grasp of the text; it’s one of the few productions of Elizabethan theatre I’ve seen in which all the actors understand all of their lines, and are able to effectively deliver them to communicate the meaning to the audience. And secondly, for handling the performance space itself.

The Playhouse offers an unusual stage: a small playing area, with the audience on three sides, which overlooks the dig site of The Rose itself, an area of several glass-covered square meters ending with a massive high pillared wall. While a wonderful historic space, it presents a daunting challenge to the production, which can only have the barest of sets and must rely on costume, lighting, sound and clever use of the edges of the back wall area to build its world. It also means the actors and audience are often physically very close, an asset when it comes to the many winking asides, but a liability when it comes to attempting to hide the mechanics of stage combat. The tone again rescues here: because the characters themselves aren’t playing a wholly realistic reaction to the various tragedies, the audience isn’t liable to being abruptly snapped from an empathetic position by a bit of obvious stage business.

Nelson and Atkins give very assured performances as the leads, carrying us through the labyrinthine plot without ever losing us. However, the standout performances are in some of the smaller roles. Hannides’ Lussurioso is a delight: demanding, snake-like, with a cruel false charm. As Junior, Camilla Watson is perfect: entitled, grotesque, relentlessly aggressive and entirely narcissistic. The evil step-sisters of Rebecca Tanwen’s Ambitioso and Allie Croker’s Supervacuo are joyfully panto, and Alice Woodsworth’s executioner, while essentially one-note, is very fun to watch. Overall, The Revenger’s Tragedy is very accomplished and certainly entertaining. Director Peter Darney’s gender-swapped and goth-steampunk aesthetic worked well to create a sufficiently different world for the actors to play in, and the satirical tone was handled well.

I would love to see more gender-swapped classics, as this production clearly demonstrates that there are wonderful performances to be found in the old familiar places. Plays can be made fresh by the interpretations non-traditional casting can bring, and can challenge our views of what the world could look like.

And what is theatre for, but to expand how we perceive the world?

The Revenger’s Tragedy by Thomas Middleton and directed by Peter Darney was at The Rose, Bankside from 3 March until 27 March, 2016.

Both photos are courtesy of Em-Lou Productions and are taken by Kasia Burke.

The first shows Ani Nelson as Vindice. She is holding her hands up in the air as she exclaims. She is wearing a black leather corset and has red make-up around her eyes. A chandelier can be seen behind her.