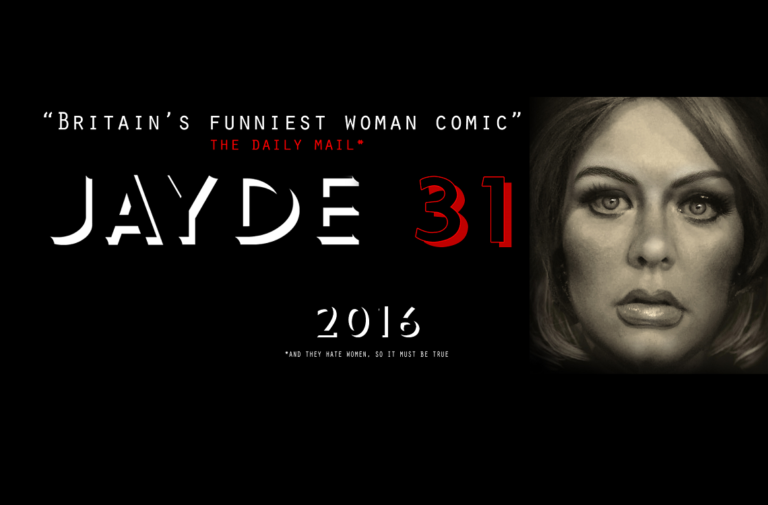 Wo! Show & Tell was a week-long celebration of women’s performances at the Hackney Showroom , an intimate warehouse venue run by a creative collective tucked away in Dalston. The events on offer included hard-hitting documentaries, spoken word performances and true stories from women refugees.

At the more frivolous end of the spectrum, I caught a Friday night double bill of two comedians who took a no-holds-barred approach to sexuality: Sticky Digits: An Audience with Pamela DeMenthe and standup Jayde Adams in Jade 31. While this is a well-crafted and giggle-worthy show, it does not have an overtly feminist perspective – unless you take the view that any exploration of female sexuality, no matter how tongue-in-cheek, is inherently empowering. However, the second act of the night, standup Jayde Adams, has more substance.

In today’s photoshopped, airbrushed world, proudly displaying a female body that isn’t toned and skinny has become a political statement in itself

Making an entrance in a gem-studded nude bodysuit (sewn by her mum, she tells us), Adams immediately lets the audience know that this will be a bold and gutsy performance. The ludicrous outfit serves as a blank canvas to be transformed into a number of different personas that she assumes throughout the evening via a series of rapid costume changes, from monosyllabic adolescent to opera-singing prima donna. However, it also represents a refusal to cover up, placing body image at the forefront of her performance and sticking up a defiant two fingers to fat-shaming.

In today’s photoshopped, airbrushed world, proudly displaying a female body that isn’t toned and skinny, or else swathed in ‘flattering’ fabrics, has become a political statement in itself. ”This is me,” Adams seems to be saying, ”deal with it.”

In fact, the entire show centres on laying bare difficult topics and emotional truths, from teenage bullying to bereavement, all served up with a healthy dose of silliness. As Adams launches into her routine, she invites the audience to share her brash and irreverent worldview, riffing on the absurdity of pop culture and laughing at herself and her family, as well as creating hilarity with some inspired physical comedy. She comes across as a likeable comedian who is naturally and effortlessly funny, managing to elicit laughs from a raised eyebrow or a fumbled costume change. She also has a few surprises up her sleeve, notably an astonishing singing voice, which really adds to her singing numbers.

This show is named 31, a knowing reference to the singer Adele who hovers in the background of several jokes. The material is mainly autobiographical: Adams recounts the story of her auspicious birth, her unpopular schooldays as a gobby asthmatic and her cringe-worthy adolescent sexual encounters (the interpretive dance sequence here is one of the most hilarious moments of the evening). There are also reflections on her pursuit of fame and fortune, along with her recent transformation into a yoga-loving, green-juice-swilling East Londoner. Some of the gags work better than others. For example, the jokes surrounding Adams’ sister’s death are slightly strained and jarring. However, seeing as this is a first preview of Adams’ Edinburgh show for this year, it’s not surprising it’s a bit rough around the edges in places.

Like the preceding act, Adams’ routine isn’t explicitly feminist. Her focus on her own escapades and mishaps leaves little room for exploring wider issues that confront women today, but with her exuberant delivery, unselfconscious physicality and keen sense of the ridiculous, she gives a performance that is still uplifting and liberating. Perhaps this is because uninhibited self-expression is a sign of empowerment – even when that expression takes the form of singing songs about trifle while dressed in a ridiculous combo of figure-hugging lycra and a ballgown. Ultimately, this is a show that celebrates being unapologetically yourself, not taking life too seriously and refusing to care too much what other people think.

Both images are courtesy of the venue and performers.

Image 1 (feature image) is a publicity image for Jayde Adams. On the right hand side is a black and white photograph of Adams made up and edited to look like the singer Adele. On the left hand side, the image reads “’Britain’s funniest woman comic’ / The Daily Mail* / Jayde 31 / 2016 / *And they hate women, so it must be true.”

Image 2 is of Pamela DeMenthe. She lies on her front surrounded by some of her books, all with her name in large letters on the covers. She is wearing a black dress, her legs are crossed at the ankles and she is holding a pen. She looks directly at the camera.