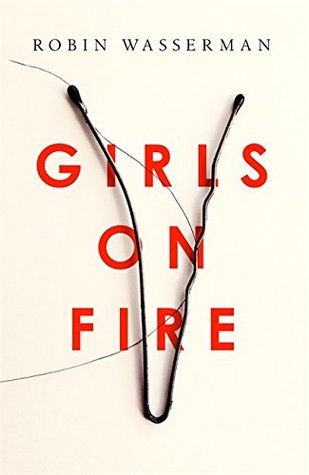 We’ve all been there, trying to get through our gawky teenage years and make a name for ourselves. It’s those definitive years of adolescence in which we become all too aware of what it means to be a girl, and how we must become a woman. We need a name that stands out, that isn’t too popular or too geeky, too sexual or frigid, too ugly or pretty, too fat or thin, too masculine or feminine. We need a name that panders to all.

Robin Wasserman’s debut novel for adults Girls on Fire (the author has previously written YA books such as Skinned and The Book of Blood and Shadow) zones in on these pubescent years, and gives a whole new meaning to the phrase “troublesome teens”. Wasserman brings together two polar opposite girls, Dex and Lacey, into the complexities of an intriguing friendship that wreaks havoc on the American suburban town of Battle Creek. The story begins in the wake of the mysterious suicide of their classmate Craig – also the boyfriend of popular gossip queen Nikki Drummond – who is found dead in the woods.

Wasserman beautifully sets the scene for the start of this complicated but ultimately doomed relationship. Before Lacey is introduced, Dex is Hannah Dexter: fearful, insecure and considered a ‘reject’ in school. During one incident, she is shamed by Nikki when her menstrual blood stains her sports kit during a gym lesson: “The gym teacher explained to the nurse that there had been an incident. That I had soiled myself, that I perhaps should be wiped and cleaned and collected by a parent or guardian and taken home.” Wasserman’s message regarding the silenced presence of menstrual blood, the shame and taboo surrounding it, the staining of red on white, could not be clearer. It is a small incident that gives clarity to Wasserman’s voice: she is not here to be bashful about the female body. Nikki herself remains a pivotal character throughout, and her introduction in this way indicates a great deal about her own confused character much later in the novel.

Wasserman’s feminist discourse that pervades the novel can be seen in glimpses like this and when she is writing to battle against patriarchy and society, it is always loud and clear. The incident surrounding menstrual blood demonstrates the absence of sisterhood, pointing to the inability of women to support one another in an already cruel and sexist world. But Dex and Lacey embody sisterhood throughout – and one that is often all consuming. Once they unite, they are inseparable, ready to take on the world with Nirvana’s Kurt Cobain as their guide. In a town terrified of Satan, where whisperings of witchcraft, rituals and sacrifices linger, the dark magic of Lacey, the seduction of the danger she represents, is tangible and all encompassing, luring the previously mousy Dex into a friendship that changes her world. Traditional gender traits attached to women and girls, rendering them meek, incapable, sexually unaware, sexually unadventurous, submissive and silenced, disappear when Dex and Lacey come together. Their desire to break free from the chains of what the word ‘girl’ normally denotes becomes ever more apparent as the novel progresses, with moments of brilliant feminist commentary weaving their way throughout the text:

Didn’t we all? What it would be like to be one of them. To have power, be seen, be heard, be dudes rather than sluts, be jocks or geeks or bros or nice guys or boys-will-be-boys or whatever we wanted instead of quantum leaping between good girl and whore. To be the default, not the exception. To be in control, to seize control, simply because we happened to have a dick.

Dex and Lacey’s relationship, sometimes sensually charged, sometimes unstoppable, sometimes utterly breakable and sometimes full of desperation, want, utter jealousy, need, pain and fear expresses a sense of urgency and desire between two young women that is both relatable and terrifying. At some moments, Lacey appears almost like a ghost that wanders in and out of Dex’s life: she is a spectre that pushes Dex out of her comfort zone, into dangerous situations, and almost tortures her very soul. That two girls can be this close to one another and not become sexually involved raises eyebrows, yet equally reminds readers that sisterhood can be this romantic, this yearning, this eroticised, without necessarily having an overtly sexual dimension.

“This is everything I need,” she said. “You’re everything. Just like I’m everything you need, right?” It was an incantation; it sealed us for life.

“Everything,” I told her, a fire sale on my soul. Everything must go. I wanted her to swallow me whole.

The novel is not only about the dangerous allure of the dark side, of perceived evil, religious extremism and girls gone wild. Wasserman is far cleverer than that. She interweaves the secret that frames Dex’s character masterfully into the disjointed, unreliable narrative of Lacey and Dex’s friendship, zooming in and out of their individual experience in a heart stopping way that almost always causes confusion: who is telling the truth? Who is the victim in all of this? Who should we like? Who should we hate?

Do not mistake this book for a simplistic read about girls fooling around, having a sexual awakening or becoming a little wild

The sex is written daringly. Wasserman is gifted when it comes to describing intimate moments, she is graphic but in a way that shows the importance of sex, submission and power play in some of the more hard-hitting and dangerous moments of the novel. In Girls on Fire, sex is carnal desire, violence, death, vulnerability and ultimately, it is life changing. The novel remains intense and sexually charged throughout, hinting at both satisfaction and unfounded, unfulfilled desire. Sex brings people together but just as quickly tears them apart. It is both there and not there, and the focus on the female body is vital to understanding that this novel is about teenage girls defying society and what it expects of them.

The moments that describe sexual and even just physical intimacy between women are especially important, since a woman writing about other women gaining intense pleasure from one another offers a perspective that is more authentic. In the novel, the female body becomes a way to explore one’s self outside the patriarchal realm. Through focusing far more on female sexuality, Wasserman gives Girls on Fire a more distinct edge that highlights women exploring one another at the heart of her work, as opposed to showing women pandering to the needs of men. Girls like Lacey, Dex and Nikki engaging in such exploration in a town like Battle Creek proves how the female body allows the breaking of boundaries to gain a new-found sense of self.

Wasserman’s brilliance lies in the fact that so many moments of the novel are written ambiguously. There are voids which need to be filled, gaps in the narrative that produce questions and dialogue that shrouds each character in mystery and doubt. An unnerving aura surrounds the entire plot from start to finish, and doesn’t leave even when we think we know everything.

Do not mistake this book for a simplistic read about girls fooling around, having a sexual awakening or becoming a little wild. Wasserman’s Girls on Fire is a destructive story of passion, freedom seekers, broken worlds and secrets that destroy. It carries an emotion that is deeply confusing and disturbing, with an ending that is impactful and shockingly carefree.

Girls on Fire is published by Little, Brown and is available to be purchased here.

The image is from Goodreads.com and is used with permission. It is the cover of the book. The cover has a cream background. The author’s name, Robin Wasserman, appears at the top and the title, Girls on Fire, appears centre in bright red block-capitals. Over the title is the image of a hair pin, bent out of shape, and with a single strand of hair caught in it.