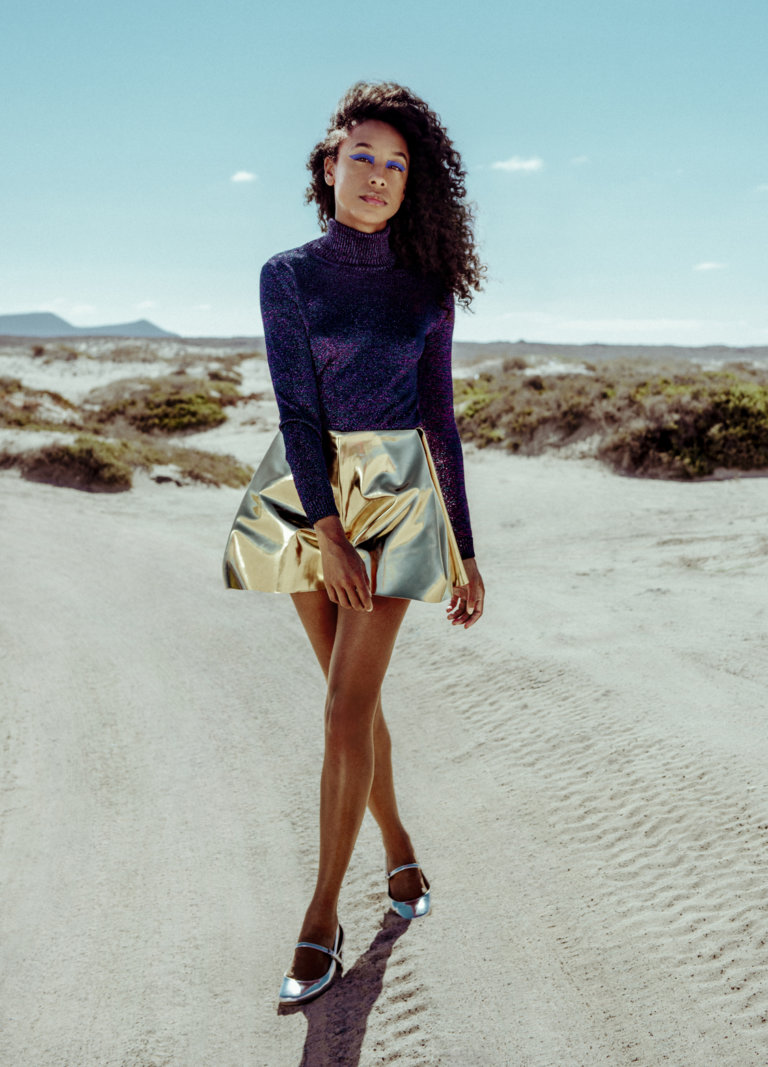 The word ‘journey’ is an overused term when it comes to music, but it seems entirely apt when discussing singer-songwriter Corinne Bailey Rae. Her 2006 debut self-titled album (featuring ‘Like a Star’ and ‘Put Your Records On’) pulled her into the limelight, going triple platinum and establishing her musical career. In the 10 years since, Bailey Rae has snapped up Grammys, performed at the White House, appeared on Saturday Night Live, empowered youngsters at BET’s Black Girls Rock! and recorded at LA’s Capitol Hill Studios. She’s also suffered a considerable low – the sudden death of her first husband, Jason Rae, in 2008.

Bailey Rae channelled her grief through her second album, The Sea. Again, Bailey Rae found success, hitting the UK and US Top 10 and securing a coveted Mercury nomination. During an interview for the awards, Bailey Rae revealed that she had started on a follow-up album, The Heart Speaks in Whispers.

Bailey Rae’s third album is a notable shift from Corinne Bailey Rae and The Sea. Dulcet ballads have been spiked by Latin American rhythms, funk grooves and a splash of California sunshine. First single ‘Been to the Moon’ leads the way – a smooth, soulful song about an emergent romance. Last month, I chatted with Bailey Rae by telephone about her new music, industry sexism and black feminism.

Congratulations on your third album.
Oh, thank you!

It must feel like a huge relief to wrap it up and get it out into the world.
Yeah, relief is a good description, because I’ve been producing this record and that’s the thing that’s really taken time – experimenting, working out how it will sound. I’ve been in it for so long, it’s a miracle to me that it’s actually nearly out and, yeah, I’m so happy about it.

Good stuff. How long were you working on it for?
I was working on it from after I finished The Sea tour, so I probably started working on it from the end of 2011. It’s been ready for little while now, but I’ve been working on it since then. I wrote lots and lots of songs, and these songs turned out to be the right songs for the record, and I worked on the production in my studio that I built, then in Los Angeles.

Oh, OK – so it was made in the UK and in the USA?
Yeah, that’s right – we worked in a combination of places. I mean most of the work we did [was] in Leeds, in my studio. I really wanted to have my own place where I could experiment and not feel like I had to wait for the engineer to be there, the clock was ticking, or anything like that. I wanted to make a place where I could really play and just experiment and see what happens and use all different instruments, and spend the whole day working on something and then decide I didn’t want to use it or…you know, just be able to be free.

Cool. The F-Word is a feminist site, which aims to reflect the modern feminist movement and analyse pop culture from a gender perspective. It’s such a good opportunity to be able to speak to a British female musician. Do you think that feminism has a place in the British music industry?
Yeah, absolutely – I think feminism has got a place everywhere in the world. I think there’s so much work that needs to be done in terms of the role of women internationally, certainly in the music industry. Anywhere where you have that kind of capitalistic approach to music – it’s something that’s very patriarchal. I think that feminism is an important lens through which to see what’s happening in the music industry, and just to be aware of. For me, that’s why I really wanted to have my own record deal, to write my own songs, to produce my own material. I’ve engineered some of my own work on this record as well. I think being very much in control of it… the issue of control as an artist is very important to me – that’s when you can have all the freedom, when you know that ultimately you are the person who decides whether it’s this song or that song, whether it’s that take or this take…so that’s been an important thing to carve out for myself I guess, and make that relationship with the record label where they come to me and they know that I’m very much running my career. That’s been important to me.

Encouraging young girls – that’s a real passion of mine

So, would you say if you had worked really closely with a producer and a record label, you would have had less control perhaps because you are a woman?
I have worked with a really good producer on this record – we co-produced it together – and I have worked closely with the label, but thankfully they have really respected me and they know that I run my own projects. I think maybe it’s harder if you don’t write or it’s harder if you don’t play your own instrument. It’s becoming harder and harder to stay in control of your image, maybe if you’re not the person who chooses your photographer or chooses what you want to say. Some people are much more part of a bigger construct, but they still run their own thing. You know, I’ve just got back from Black Girls Rock! and it was really interesting hearing Rihanna saying, “be yourself” [Rihanna was being honoured at the event]. Every time she’s really stuck to her guns at being herself, that’s when she feels she’s made her greatest work. She’s very much in control of what happens. Ultimately, in a situation like that, like capitalistically you’re right at the centre of things – they can’t do it without you. It does give you a lot of power. Black Girls Rock! and movements like #blackgirlmagic stem from the USA. Based on your experiences, would you say there’s a need for movements that intersect race and gender in the UK, or do you think we’re doing pretty well on that front?
I think there’s always [a] need for those things; I’d love to see a Black Girls Rock! happening here, supporting black girls. When I [first] went to it, I thought it was going to be much more about music, like “oh, check out this girl, she’s a great singer” or whatever, but it was really about honouring people who are doing really great work in the community. So, there was one young girl who was making clothes and sending them to the developing world and working on reusable sanitary napkins and stitching them and sending them to developing countries. There was another girl whose dad was diabetic, and she set up a healthy food programme for him and the whole family, and then it gone even wider into the community. You should see her – she’s, like, 14 and she’s teaching all these eight and nine-year-olds how to eat healthy and how to cook. So, I think there’s definitely a similar need for something like that here, to encourage black girls in their unique beauty and their ability to go into the world and change the world. I felt really emotional being at Black Girls Rock! – I wish that had existed when me and my sisters were kids. I’d love to be involved in one in the UK, just encouraging young girls, that’s a real passion of mine – young girls knowing what their strength is, knowing when they can say yes or no, knowing that they can run their own lives and plan. So, yeah – I would love to see something like that happen here.

Awesome! One last question. Yesterday, I was reading an article about “shine theory”. It’s a theory put forward by feminist journalist Ann Friedman. I don’t know if you’ve heard of it?
Shine theory? I don’t know about it, no.

It’s the concept that instead of women envying and competing with each other (and each other’s successes), we’re at our best and brightest when we befriend and support each other. Do you feel that shine theory has ever rang true during your musical journey?
Absolutely! I’d say no more so than now. There’s this brilliant band called KING, who are an American band – it’s two twin sisters and their friend and they’re all women. The producer from that band is called Paris Strother. She makes all the music and engineers everything herself. So, she’s just a brilliant example of a woman who is just running her own world. It was amazing to work with her, and to be encouraged by her. She was so generous, in terms of writing with her, so I loved collaborating with her. I loved working with Esperanza Spalding, who’s another black girl who is in music and singing and jazz. I felt supported by female musicians. I always used to really get encouraged by Amy Winehouse. She’d say really nice things about my writing and singing – she’d always have really nice things to say when she saw me. The first time I met Adele, she was telling me how much she liked The Sea. I really feel like the idea of women competing against each other is slightly an external construct. I really feel that much of women’s achievement has come about through supporting each other, encouraging each other and helping each other. I went on tour with Norah Jones for my second record and that was, again, really supportive. Every female musician that I meet, I always find that we find ourselves to be a slightly rare breed and everyone just wants everyone to keep going. The more space we carve out in the world, the more space there is for everyone. The idea that there can only be one – it’s just not true. I think it’s been great over the past few years to see Beyoncé and Nicki Minaj and Rihanna really high up in sales and presence. I know there has been a narrative of them more competing with each other, but the truer thing is that it’s telling labels that female artists do sell.

The Heart Speaks in Whispers is out now. Bailey Rae’s UK tour begins in June – find out more at her website.

Image one, at the top of the page, is a full-body shot of Corinne Bailey Rae stood in the desert, with blue skies and desert scrub behind her. She wears a pair of fabulous golden shorts, silver shoes and has some serious blue statement eyeliner on. She looks awesome.

Image two is a closer, side shot of Bailey Rae, in the same location (blue sky and sand behind her). She now wears a long, pleated golden skirt and her gorgeous curls flow behind her. Images used with kind permission of Wilful Publicity.