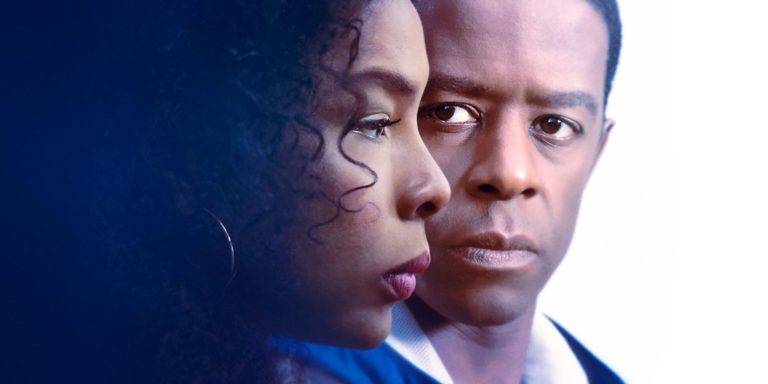 Drama and intrigue at the expense of victims

Spoiler alert if you haven’t yet watched all of the programme.

Undercover! The clue is in the title.

Because some might think a drama examining the role of undercover police and the immoral – not to mention unlawful – tactics they employed in spying on political activists might pay more than lip service to the victims of such abuse, which might, in fact, attract a more pertinent title.

But that would necessitate a focus on the wrongs done to women in the name of “national security”. That would mean giving voice to the women harmed in the process.

Which would never do. So instead of the needed examination of an issue that has been much in the news lately, we get a thriller with an overblown ludicrous plot, centred overwhelmingly on the feelings of the supposedly heroic Nick Johnson (Adrian Lester).

We learn early on (mostly through flashback) that Nick is an undercover policeman inserted into a highly militant anti-racist movement led by the charismatic Michael Antwi (Sope Dirisu). Tasked with infiltrating Michael’s organisation, Nick worms his way in, first by being useful and then hopping into bed with their legal adviser, up and coming barrister Maya Cobbina (Sophie Okonedo).

Fast forward to the present and Nick is now perfect dad to a modern family, including Maya, two daughters (one serious, one apparently frivolous) and an autistic son. In the interim, Maya has pursued her twin obsessions alongside her successful law career: finding out who killed Michael, apparently victim of a police conspiracy two decades previous, and saving US death row inmate Rudy Jones (Dennis Haysbert) from execution.

Bizarrely, given her total lack of prosecuting experience, the series opens with Maya accepting appointment as Director of Public Prosecutions. Nick, who has supposedly retired from undercover policing is unwillingly reactivated and we’re off on a two-track story. On the one hand, there is the question of the secret behind Michael’s death and just how far into government does it go. On the other, there is Nick’s lone battle to save his family from the trauma of finding out his dreaded secret.

Then there’s the puzzle of what links Michael and Rudy and….

No. Stop! Step back a moment and think critically: we are being fed a candy-coated reality, in which the true awfulness of the situation is obscured by the drama. Yes, Nick turns hero at the end and apparently redeems himself by being prepared to sacrifice his life to save his family, but he remains what he has been throughout. Dishonest. Untrustworthy. And, in the final analysis, either unbelievably naïve or, frankly, just plain ignorant.

For example, he gives up the name of a new witness to Michael’s death and is neither surprised nor especially bothered when she later turns up “accidentally” dead. Quelle coincidence! Did he do that? Surely not.

Of course, the truth will out. There is a moment of perspicacity when Maya, finally appreciating the extent of his perfidy tells him he will never touch her again. Even more, when she states, “You raped me: […] You are a rapist”.

But it doesn’t last. Because no sooner have we lighted on the true scandal behind Undercover, than we are off again on a distracting merry-go-round of national security and boys being big serious boys, complete with scary Scottish spook, Paul Brightman (Derek Riddell), played like some wild cross between Malcolm Tucker and James Bond.

And this, in the end, is what I find truly offensive.

What we know, from a series of cases – collectively campaigned for under the #policespiesoutoflives tag – is that over a period of decades, the Metropolitan Police ran undercover officers inside a number of groups deemed to be dangerous.

Their criteria for ‘dangerous’ appeared to be immensely flexible. Targets included climate change activists, trade unionists and, more generally, people campaigning for the right to enjoy the basic social justice supposedly granted by law in the first place.

If you are going to make drama out of the abuse of women, perhaps you might consider focusing on their stories

In order to maintain their cover, some officers entered into and carried on relationships – sometimes lasting several years, sometimes having children – with target activists. Or, in at least one case, with an individual who wasn’t an activist at all and was merely a friend to someone who was.

To date, all the cases unearthed appeared to involve male police officers striking up fundamentally dishonest and therefore abusive relationships with female targets.

Over the last few years, thanks largely to the efforts of feminist lawyer Harriet Wistrich and eight women prepared to demand justice, the truth of what happened has been prised out of an unwilling police establishment.

The battle has been hard fought, as the powers that be have worked hard to keep the truth hidden at every turn.

Cases have been brought under Human Rights and Common Law. Some compensation has been paid. A public inquiry is now taking place.

And here, drumming up support for his show is writer Peter Moffatt. Explaining that it is “a serious problem”, he continues:

Perhaps what you don’t know is that since 1968, 460 institutions and organisations have been infiltrated by the police force in this country.

In a lot of cases we don’t know who they are, of course, and nor will the police tell us.

Well, quite. But if you are going to piggyback on this issue – if you are going to make drama out of the wholesale abuse of women – then perhaps you might consider focusing on their stories. Not making up some overblown cock and bull froth whose central message is “Oh… but it’s so complicated.”

No it’s not. The police acted wrongly. In time, when the dust has settled and the breadth of that wrongdoing has been fully explored, it might be possible to look in greater detail at the police side of the story. But, in the meantime, when women are still fighting to be heard, to distort and erase their point of view in exchange for yet another police drama is appropriation.

No more. No less.

You can still catch the penultimate episode of Undercover on BBC iPlayer until Tuesday 31 May. The final episode will be online until 9 June.