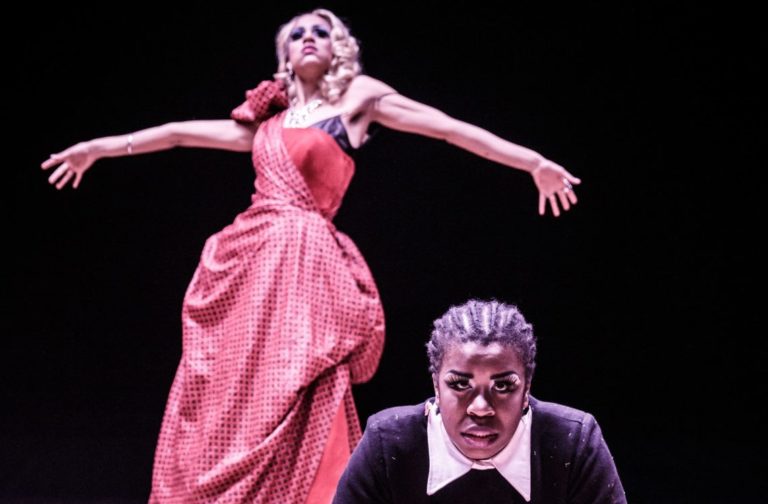 Murderous sisters in the West End Jean Genet’s 1947 classic psychodrama The Maids is loosely based on the true story of sisters Lèa and Christine Papin, who killed their employer in 1933. Two working class girls with a difficult family background, their story was of great interest to intellectuals at the time, who thought it to be the epitome of class struggle. Director, Jamie Lloyd, has set the play in the American south, where the tumultuous legacy of race throbs close to the surface.

At the start of the play, a very large, ornate wooden box sits at the centre of the stage. As the lights dim, the panel doors of the box open to loud synthesizer music, revealing two characters in a shower of petals as spotlights pulse. The figures are frozen in bold poses in shadow; it’s McQueen fashion show meets West End play.

The two characters are the sisters: Solange (Zawe Ashton), towering in heels, a silk robe and blonde wig, and Claire (Uzo Aduba), in her uniform. They begin boldly with their playacting of murdering their mistress, bringing in the comedy that fans have witnessed from these actors in Fresh Meat and Orange is the New Black, respectively.

Filling the stage with their exaggerations and glamour in ostentatious makeup, Ashton and Aduba’s partnership is instantly invigorating, with Ashton screeching demands between bursts of her ‘woe is me’ diatribe and Aduba remaining exceedingly humble. The overwrought dramatics only escalate from here.

When their game reaches its familiar conclusion, the maids hurry to stash the clothes and jewels back in their rightful places. They scrub off their clownish faces and resume conversation about the latest demand they must fulfil. Uzo Aduba brings elements of her twice Emmy nominated character ‘Crazy Eyes’ (Orange is the New Black) to her role, with blunt exclamations and great physicality, but also introduces a quiet stoicism to Solange, initially concealing the character’s true intentions.

Zawe Ashton’s Claire is decidedly the weaker character of the pair, whose open affection towards authority figures leads her to follow her sister thoughtlessly. She careens between complicity with the proposed methods of offing their boss and horror at it. Her internal struggle makes her prone to emotional outbursts, much like the real Lèa Papin.

Their mistress (Laura Carmichael) is a caricature of white, upper class privilege. Her two brief appearances widen the divide between her maids and herself. Her illusion of kindness is as shimmering as the trinkets she temporarily promises to her maids before clutching them back as another idea of ‘kindness’ pops into her head. Though this role could be seen as one-sided or stock, Carmichael adds a layer of self-reflecting insecurity to her character beneath the breakneck monologues.

As the play progresses, so does the claustrophobia of the setting and sisterly relations between Solange and Claire. They are the tragi-clowns of the play – while their methods seem outlandishly improbable, the desire to transcend the hand they’ve been played is real, verging on desperation.

So, as Solange and Claire’s murderous intentions escalate, so too does the vehement language in their role-playing, with the inevitable denouement becoming a little too real more than once. In the final role-play, Solange is baying for Claire, as ‘Mistress’, to insult her as much as possible, adding kindling to the already blazing fire. She eventually bursts into a fervent speech, as she imagines herself as a martyr to all of the underrepresented and overlooked members of the service industry and working classes. Though Claire begins confidently in the overacting of her employer, she seems to lose her grip on reality, as their playful plan enters the real world.

The characters move within a triangulated power play: all parties need each other, but whereas Claire’s strength lies in her ability to role-play, this power does not transcend beyond the fantasy realm. This only serves to strengthen Solange’s conviction to kill her Mistress. In a trickle down system, born out of fierce love and personal need, Solange also enacts emotional control over Claire in order to fulfil a plan she believes they both desire.

This structure begs the question: why do we stay with the ones we hate, even when the relationships are emotionally damaging to us? Watching the maids clam up when they are forced to revere the mistress’ presence, in between her faux niceties, is uncomfortable to say the least. Her language is laden with caricatured racial slurs; she calls them dirty, lewd, poor, ugly and deems them inherently worthless. Not to mention that she also seems unable to distinguish between them.

This treatment causes the sisters to veer in alternate directions. Claire seems content to remain in servitude whilst occasionally playing at having power, repeatedly reminding herself and her sister how kind their employer is. She parrots back her mistress’ lines; they are nothing without her and she is generous to them: the employer as white saviour. Claire’s naivety is heartbreaking when contrasted against Solange, who is eager for revenge. For her, each order is another straw on a back that’s already dangerously close to breaking.

The magnificence of this play lies in the closeness of the sisters’ relationship, as members of an apparently ‘lower’ class, who are sexually repressed and possess wild imaginations. While their mistress sees them as interchangeable servants, they are two very different, strong people with motivations at polar ends.

Each character lives in their own fantasy world, projecting idealised versions of themselves: verbally committing acts they are unable to actually do, be it murder, attaining notoriety, inflated social status or happiness. Their orbits occasionally collide but, for the most part, each of their thought trajectories is isolated.

The casting in this particular production of The Maids is standout. Not only is each actor flawless in their performance, there is also the possible benefit that a more diverse cast could attract a more diverse audience, which is to be encouraged. Theatre needs bolder casting like this to make it a pastime for all, rather than casting the same faces again and again.

Intense, captivating and not one for those who balk at the c-word, The Maids is a play that gets under your skin and remains there long after viewing.

Both images are courtesy of Jamie Lloyd Productions are are credited to Marc Brenner.

The first image shows Zawe Ashton as Solange and Uzo Aduba as Claire. They are both lying on the floor on their sides, with Claire tucked up behind Solange with her eyes closed. Solange looks up. They are bathed in blue light.

The second image (and feature image) also shows Zawe Ashton as Solange and Uzo Aduba as Claire. Claire is in the foreground, kneeling on the floor, looking up. Solange is standing far behind her, wearing a pink ballgown with her arms stuck stiffly out to the sides. The floor is covered with petals.