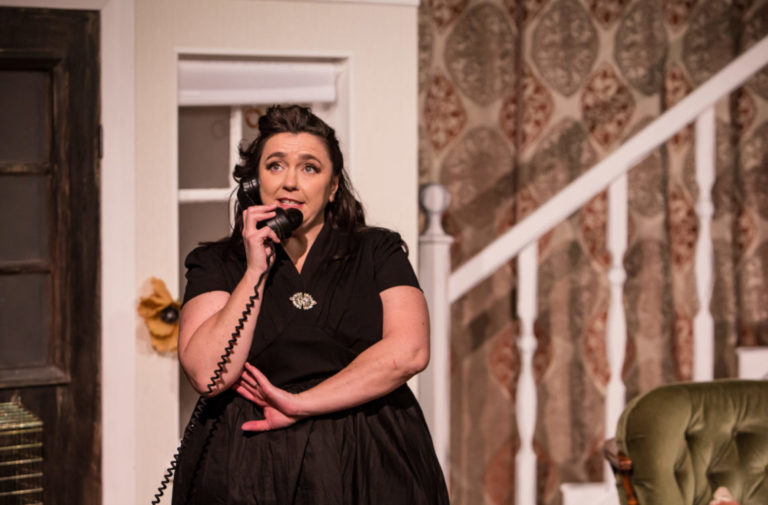 Becoming Hattie is a one-woman show from Proteus Theatre Company that has been touring mostly rural venues since March. I saw it at the Leicester Square Theatre in London.

The play has been written by Mhairi Grealis, with dramaturgy from Stella Duffy. It weaves together the stories of the fictitious Jo, a modern day jobbing actor, and the real life Hattie Jacques, the comic actor best known for her work in the Carry On films. Although Jo is fictional, it’s hard not to believe that the role has been influenced by the experiences of Ashley Christmas, who plays both Jo and Hattie.

Christmas has an engaging presence and really carries the play. At the beginning, there is a slight edge of nervousness to her performance, which feels a little off-kilter, but once the show is underway, she settles into the role brilliantly and, as an audience member, I feel much more relaxed.

I have often found one-person shows difficult to watch. For me, much of the pleasure of watching theatre comes from the relationships between characters and, with only one character or one voice, my attention can sometimes wander. Here, however, director, Mary Swan, and the rest of the creative team manage to keep a texture within the play by switching between the characters of Jo and Hattie, clever use of voiceovers, music and lighting, changes of tone within the show and even a tiny bit of audience interaction – though it must be said that in an audience principally made up of women, Christmas has to search a bit to find the men she needs to make the interaction work.

Jacques never took her number out of the phone book, so she continued to receive dirty phone calls until the end of her life

Hattie Jacques had a fascinating and often turbulent life. The play covers a lot of ground, including her marriage to the actor John Le Mesurier, her work as a welder during the second world war and her sons being convicted for cannabis possession. It also brings up the extremely problematic way she came to have the name “Hattie”: in a minstrel show in the early part of her career, a crew member remarked that, ‘blacked-up’, she looked like the black USA actor Hattie McDaniel, best known for her work in Gone With The Wind and the name stuck. Becoming Hattie is a very funny play with some good one liners and some excellent visual gags. I am tickled to find out that Jacques never took her number out of the phone book, so she continued to receive dirty phone calls until the end of her life, which she encouraged. Through Christmas’ portrayal of Jacques, we see an elegant and kind woman, who worked hard and tried to rise above the typecasting she experienced and the comments people made about her size.

Becoming Hattie is essentially about the way society pigeonholes and shames fat women, including Jacques and the modern-day Jo. Jo finds herself forever wearing a tabard and never getting to play the lead in her work as an actor. She yearns to play Bond, and imagines her cleaners’ dusters being used for parts in Star Wars and Kill Bill. However, as an ex-actor myself, I think describing a role in Sherlock and playing a ’prossie’ in Les Mis as parts of an unsuccessful career is a little disingenuous; these are both jobs that many actors would love to do but may never receive the opportunity to. Jo also has a boyfriend, David, who belittles her career and encourages her to give it up: a situation that I’m sad to say I have seen occur within my friendship group.

Jo thinks she is about to have her big break when cast in a new play from a famous director. However, there is a twist with this and things don’t turn out entirely as she’d hoped. The pretentious theatre company is simply and hilariously portrayed with Jo impersonating the director’s assistant, Tilly, who does his speaking for him and has never heard of the Second World War.

The most moving moment in the play comes when Jo describes a nasty leaflet handed to her on the tube by an anonymous man; that this story is based on real-life events makes it even more upsetting. This, for me, is the emotional high-point of the play, and means that a heart-felt closing monologue, although well-written and delivered with truth, could be considered unnecessary. This closing monologue also veers a little too close to body-shaming thin people for me to be entirely comfortable with it; women’s bodies are policed by society in a variety of ways, and so the assumption that all is fine for those who are thinner is simplistic.

The set is simple, as befits a show touring to venues of various sizes, with just three flats, two of which provide spaces for quick changes, a hat stand, a cuckoo clock and a sofa. It barely fits into the tiny space of the Leicester Square Lounge, although the area is used well. Christmas’ clothes are especially good. She spends most of the play in a gorgeous blue dress, but has some other costume tricks up her sleeve for later in the play.

Becoming Hattie manages to be many things; it’s an easy show to tour to hard-to-reach venues and a look back at an acting icon that manages to be both funny and moving. It’s also a very timely reminder of how larger people in our society are still treated unfairly: from discriminatory comments and assumptions in both real life and on social media, to missing out on jobs and payrises. Hattie Jacques had an amazing career but was still typecast into a very narrow range of roles, it’s such a shame that Jo, and many women like her, are still experiencing the same prejudices.

Hattie Jacques once said, “If you’re fat, you’re funny”; do we as a society have to keep accepting this?

Becoming Hattie will be at Redbridge Drama Centre on 8 June, Proteus Creation Space on 27 and 28 June, East Riding Theatre on 29 and 30 June and York Theatre Royal on 1 and 2 July. Details here. All venues are fully physically accessible. There is a visual story available for the venue at Proteus Creation Space for anyone who would find this beneficial.

The feature image shows her in a black dress talking on an old-fashioned telephone. Her hair is set in waves. Behind her we can see stair banisters and a patterned curtain.

In the second photo we see her sat on a green sofa. She is wearing a black and pink negligee and dressing gown and is knitting with red wool. She looks to the right, with a slightly disappointed expression.