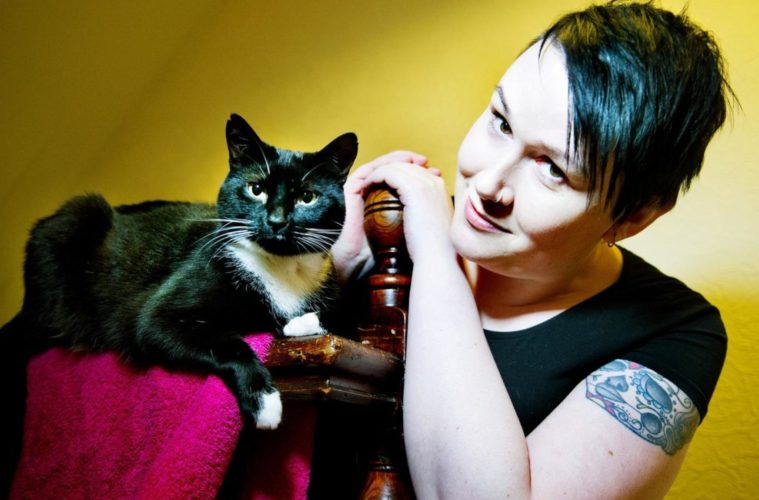 Our fourth post of reviews from the Edinburgh Festival Fringe. Today we’re covering comedy. We’ll have two more short comedy reviews at the end of next week

Being dumped by her fiancée, bereavement, serious injury, chronic illness and more bereavement – these things could have happened to anyone at any time, but they all happened to comedian Bethany Black within the space of two years. Black has had some extremely tough times, but she’s come out the other side fighting, and she draws upon some of her darker moments for this hilarious standup show.

The result is a riotously funny exploration of Black’s life, probing the inner workings of her self-professed “messed-up mind”, how terrible the year 2012 was for her and the start of her unintentional acting career, which has helped her achieve her “narcissistic” lifelong dream of making history (she’s the first trans* person to play a transgender character in both UK and USA broadcast TV).

Acutely aware of what might or might not get a laugh, she reads her audience well but is always ready to test the boundaries anyway. While some of her tales begin rather bleakly, she’s able to find a joke in them all; seeking not sympathy, but solidarity through being able to laugh about her experiences.

(Extra) Ordinary points out the absurdity of what life can throw at you, while acting as proof that there’s always a way to turn it around – something everyone can relate to, no matter their life experiences. Call of Dudey
Until 28 August, 13:25, Just the Tonic at The Caves
Reviewed by Lauren Hossack

Offering absurd takes on everyday situations, Dude Looks Like a Lady pulls their audience into a whirlwind of comedy that’s great fun to watch, racing through sketches that poke fun at bridezillas, public transport creeps, vengeful girlfriends and gym bros.

Moustaches on face – testament to the group’s refusal to take themselves or their subject matter too seriously – they mercilessly make jokes about lad culture and sexist double standards; just two elements of modern life that come in for lampooning. The show caters to many shades of humour, ranging from borderline slapstick, to a story that takes a very dark turn.

There were a handful of small breaks in character, but the group’s strong chemistry allowed them to recover from these quickly without derailing the sketch or losing the audience. On the whole, Call of Dudey offers a polished performance that looks as fun to perform as it is to watch. Bridget Christie’s 11am shows at the Stand in Edinburgh are now an integral part of my Fringe experience. This year’s is not so overtly feminist as some of her previous shows, but instead focuses on the run-up and aftermath of the UK’s recent referendum on leaving the EU with occasional diversions into gardening.

Christie is incredibly good at getting the tone just right for her material – too serious and she’s in danger of coming over as po-faced and preaching to the converted, too light and it might seem as if she doesn’t really care about the important issues that she’s discussing. For this show in particular she has an air of good humour which means that even the most ardent Leave voter in her audience couldn’t be alienated by her passionate pro-Remain position.

Standing on stage in a Union Jack top, Christie makes jokes about how women are discouraged from taking up space, suggests that Michael Gove is a robot and gets plenty of mileage from the time that the Daily Mail genuinely mistook her for Charles II. An excellent hour of humour with contemporary relevance. From drug addiction and alcoholism to sugardaddy.com, Eleanor Conway has done it all. Conway’s solo show Walk of Shame is shocking, poignant and undeniably funny. There are moments when I want to hug her and cry with her, and I worry she has lost all hope of making me laugh, only for her to make an on-the-nose comment that has the audience cackling.

Conway’s comfort on stage is irrefutable and in turn the audience trust her whole-heartedly. At times there are jokes that make me groan but then she keeps going with her extraordinarily unconventional story so the show as a whole is anything but hack. I love nothing more than to see a performer clearly enjoying her show and that enjoyment exudes from Conway throughout. In the darkest moments of her story she appears powerful and in the silliest moments she appears strong; she can achieve this because she is completely in charge of her show, lines learnt to perfection and stage persona polished.

I would recommend you go and see this show with your friends. The show ends with a singsong led by Conway, giving the opportunity to dance together. This kind of communal happiness is exactly what I want from a show at the Fringe. Lou Sanders brings an hour of eccentricity and creativity to the Fringe this year. If you’re looking for an hour of straight standup packed with observational and relatable comedy, that isn’t this show. Sanders’ silliness and comedy is extremely self-aware, and I am desperate to be in on the jokes. She plays characters for the smallest moments and tells stories that are bizarre but believable and hilarious. Sanders’ hour is unlike anything I’ve seen before.

There is a relatively small audience at the performance I attend. Sanders is openly disheartened by this, but the small audience size is not a reflection of the quality of the show. If anything I feel like we were all part of a little club of weirdness.

Go and see What’s That Lady Doing? on a day when it is raining and you’re worried about the future of the world – it will sort you right out. Before I see Sanders’ hour, I stub my toe and it threatens to ruin my day. After the show, I forget all about my toe and skip home from the Pleasance Dome with a cup of tea in my hand and a song in my heart. This show is funny, strange and memorable. On the opening night of Evelyn Mok and Katharine Ferns Present Katharine Ferns and Evelyn Mok!, the audience sit elbow to elbow in a packed out room in the basement of Cabaret Voltaire. We are introduced to Swedish-Chinese Mok and Canadian Ferns and each comedian takes the floor for half an hour.

Mok opens by getting to know the audience, knowingly telling us “we’re all in this together”. Her easy manner elicits participation rather than downward glances. Mok’s material covers topics from racism to dating to reproduction and she is very funny with a quietly confident, almost nonchalant manner. Her wry delivery ensures her jokes about race hit the mark and she concludes that the casual racism she experiences doesn’t bother her, telling us “we’re taking over, you’ll all be living in England town soon … you all look the same to us!”.

Next up, Ferns takes to the stage with a mix of material including sex, mental health and life on Mars. Ferns is funny and energetic but I feel she has yet to completely find her style. Her commentary on single life, “I went to the doctor for a check up; I just want someone to touch my boobs”, works well for the online dating era.

Although the feminist element could be stronger, this show provides a taster of two fresh and talented standups.

Katharine Ferns also has a solo storytelling show about domestic violence at 18:00 at Cabaret Voltaire where she is collecting for Refuge.

Image 2: From Call of Dudey, used with permission. A studio photograph of all four members of Call of Dudey. They stand in a row, three have their arms crossed and one has her hands on her hips. They all wear white shirts and black ties. They look like they mean business.

Image 3: From Bridget Christie, used with permission. A black and white photograph of Christie’s smiling face and her arms are superimposed on a picture of a bright pink coffin. The coffin has RIP written on it.

Image 4: From Eleanor Conway’s Walk of Shame, used with permission. Eleanor Conway walks down a London street. It is the morning with people on their way to work and deliveries being made. Conway is wearing a short silver dress and a fake fur coat and is clutching a takeaway coffee. She has her arm raised as if she is hailing a taxi.

Image 5: From Lou Sanders: What’s That Lady Doing?, used with permission. Sanders is sitting down with her legs crossed. She is holding a stuffed seagull and a bag of ready salted crisps. There is a crisp in her mouth. She’s wearing a floral dress and has red fingernails.

This post was edited on 16 August to include details about Katharine Ferns’ solo show.