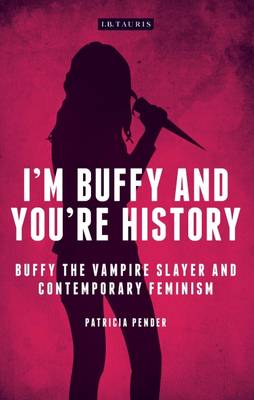 In autumn 2002, I went to my second ever academic conference, ‘Blood, Text and Fears’, at the University of East Anglia in Norwich. I was a newbie to the scene, but still – something wasn’t right there. There were academics singing in some of the conference papers, and themed chocolate bars on sale. Everyone stayed late on the second night to do extra viewing. Every second paper had the word “queering” or “feminist” in the title, and The Guardian took the piss out of it. It could only have been a Buffy the Vampire Slayer conference.

Patricia Pender’s new book is as much a history of the way in which the area of Buffy studies has changed how we talk about television and media – making it more accessible, more feminist, more queer – as of the show itself. This is pretty handy at a time when media studies, along with the arts and humanities in general, is being pushed out of the curriculum in schools and universities in the UK, while the media – as recently demonstrated in the EU referendum campaign – assumes ever more control of our politics. Pender’s account of “how to do (feminist) things with Buffy” is a thoughtful and rousing reminder of why (feminist) media analysis still matters.

Rather than pore over the “is she/isn’t she” debates about Buffy herself, Pender opens up the discussion of why Buffy’s feminist (or not) status counts

Pender has, as she proudly announces in the introduction, been writing about Buffy for 20 years, since the eponymous heroine’s first appearance on TV. Although the show ended in 2003, it has had – as Pender wittily puts it – “an extended afterlife” as one of the key texts for the crossover between fandom and scholarship. Unlike the conversation around many shows that have found a similar “aca-fan” community, such as The Sopranos and Mad Men, the conversation around Buffy has always been, first and foremost, feminist.

Rather than pore over the “is she/isn’t she” debates about Buffy herself, Pender opens up the discussion of why Buffy’s feminist (or not) status counts. You don’t need an in-depth knowledge of the show, in other words, to follow Pender’s discussion about what an activist feminist criticism can do, or about how one particular show invites that criticism. Readers may want to (re)visit certain episodes or seasons to decide how they stand in relation to the lines of debate that Pender lays out, but also draw on her arguments to apply to other “girl power” texts such as the recent Ghostbusters film.

If you know everything about Buffy (and I believe I once referred to myself in print as wanting to be a “buff Buffy buff”), this is an eye-opening guide to the parallel evolutions of Buffy and the branching of “Euro-western” feminisms since the third-wave. Pender offers a tour of girl studies, intersectional feminism and queer theory, as well as making a strong argument as to why conventional scholarship has dismissed popular culture by feminising it, and how feminisms can reclaim it.

This is not to say the author advocates an uncritical embrace; instead, she focuses on the complex negotiation of loving a pop culture text while holding it to its own standards. She examines the show’s failure to follow through on its claims to feminism for everyone, particularly in its seventh season (2002-03), where the construction of an Internationale Slayer Brigade is undercut both by the jokey deployment of racist tropes and by a leader whose speeches sound increasingly like those of Donald Rumsfeld. But, as Pender notes, “the real insights that might be gained from studying Buffy in this way concern our own complicities with and investments in those discourses.” Burn.

Pender’s argument that “do[ing] (feminist) things with Buffy” can lead us to look at our own complicities, rather than just wave our pompoms in celebration of popular culture that appears oriented towards (normative) female audiences, pays off magnificently in a final section on the fan video, ‘Buffy vs. Edward’ (available on YouTube), in which Jonathan McIntosh mashes up scenes from Buffy and the first Twilight film. Without criticising Twilight fandom, McIntosh uses Buffy and (the character of) Buffy to make the stalker-ish and abusive nature of Edward’s characterisation apparent. Pender salutes Buffy fan culture for its political awareness, and notes that, while the Whedonverse fan community has been widely studied, scholars rarely give fans and fandom credit for their agency and inventiveness.

If you’ve never watched the show but you’re intrigued by its feminist potential (as well as its failings), ‘Buffy vs. Edward’ is a rousing place to start – as is Pender’s welcoming and witty book. For fans in your life who might like (or need) a fast-paced, accessible and inclusive introduction to the last 25 years of “Euro-western” feminist theory and practice, Pender’s book could also be a great guide to “how to do (Buffy) things with feminisms.”

I’m Buffy and You’re History by Patricia Pender is published by I.B. Tauris and is now available to purchase.

The image is the cover of the book and is used with permission. The silhouette of a figure, probably the character of Buffy, holding a stake is set against a dark pink, mottled background. The figure is holding the stake close to their head as if ready to strike. The title ‘I’m Buffy and You’re History’ appears across the image in white block-capitals. Beneath it, in the same font but slightly smaller, is the sub-title ‘Buffy the Vampire Slayer and Contemporary Feminism’ as well as the author’s name, Patricia Pender.