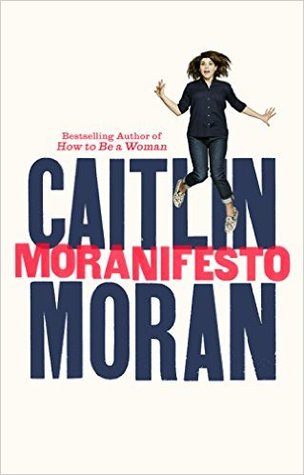 The return of Caitlin Moran Caitlin Moran is a somewhat divisive figure within the feminist community. She has been praised for making feminism accessible and mainstream to a new generation of (mostly) young women. She writes about feminist topics with her usual humour, and has a huge platform to do so, reaching people who might not otherwise engage with feminist ideas.

Many, though, see her as emblematic of ‘white feminism’. She caused controversy in 2012 when she tweeted that she “couldn’t give a shit about” the lack of PoC in Lena Dunham’s Girls. Her brand of feminism has been accused of being un-intersectional, and rooted in her own relative privilege as a cis, white, (now) middle-class, heterosexual woman.

For these reasons, I was unsure about what I could expect when starting her Moranifesto. Had she had time to reflect on her 2012 comments, and had her own views changed as a result? Or could I expect more casual disregard for PoC and other minority groups?

Moranifesto is a collection of Moran’s recent columns, as well as some new writing. It’s divided into three broad parts, which she terms as: ‘the twenty-first century’, ‘the feminisms’ and ‘the future’. As most of the writing originated in her columns, the pieces are typically around two to three pages long. And there’s a real mixture of the serious and the … less serious.

Moran explains this medley of tone and subject herself in the introduction. At age seventeen she started writing about pop music, TV, film and radio – topics seen as light “life stuff”. She deliberately avoided politics, seeing it as the realm of “serious adult men, in suits, who knew people in Parliament” – a group of people she did not feel part of.

After writing How to be a Woman, Moran realised that she shouldn’t avoid writing about politics because she was “the wrong kind of person”. However, she assumed she’d have to make a choice – to give up her humorous writing in order to become more “high-brow”. Her editor told her she could, and should, do both, and hence, Moranifesto has come to include writing on a huge range of topics.

The book’s blurb announces that Caitlin Moran is “never afraid to address the big issues of the day – such as Benedict Cumberbatch and duffel coats”. Whilst this is somewhat tongue-in-cheek, it summarised one of my major problems with Moranifesto. I wasn’t convinced that the mix of topics quite worked. In part two, ‘the feminisms’, Moran writes that part one was “a bold opener for a book that is basically a collection of columns about London property prices and Ant & Dec”. That is an accurate representation of part one, which felt a bit all over the place.

Many of part one’s individual columns were certainly interesting, but after reading three pieces in a row about London property prices (all fairly repetitive), followed by several TV reviews, I wondered who the book’s target audience was. Perhaps this just means that I’m just not a fan of the ‘collection of essays’ genre, as I found the lack of any underlying theme and progression unappealing. And yet, I certainly enjoyed many of the individual pieces. I think one of the problems with Moranifesto is that it is simply too long. At over four hundred pages, it’s a physically huge object, and takes a lot of time to read. Many pieces were repetitive, touching upon the same themes without offering any new analysis. I do enjoy Caitlin Moran’s style of writing, but I made very slow progress with Moranifesto, as my interest would wane after a handful of columns.

The section of the book focused on Moran’s feminist writing was the section which I found the most engaging. I particularly enjoyed her piece on “the two things men need to understand about women” where she quoted from a comedy routine by Louis C. K.:

Globally and historically, men are the number one cause of injury and mayhem to women. By comparison, do you know what men’s number one threat is? Heart disease. Guys, if you want to know how brave a woman is every time she says yes to going on a date, try to imagine that you could only date a half-bear, half-lion. ‘Oh – I hope this one’s nice!’ That’s being a woman. [author’s note: this concept of being a woman is incredibly heteronormative]

Moran’s skill is that she can simplify sometimes complex concepts, and humanise topics so that all sorts of people can understand the relevance to themselves. She shows people that feminism is not just for academics or campaigners, but is for everyone. The converse of this approach is that, sometimes, Moran can risk simplifying feminism too much.

When the state is freely executing black men and women, I don’t think your number one priority should be not to upset anyone on Twitter

Moran defends her own position in the column ‘Women keep fucking things up’. This column shows us a range of feminist icons – Sheryl Sandberg, Lena Dunham, Beyoncé – who have been accused of not being feminist enough: “Because every time you make some error, or miss something out, you’re making feminism look foolish”. Moran says she is bored of people asking “why haven’t these women done everything? Why haven’t they addressed all the problems women face?”

All of these women highlighted certain issues. They represented certain groups. Can we really expect them to be everything to everyone? Moran wants us to take “a moment to be joyful over the stuff that, against all the odds, they actually did do. Imperfect but useful achievements which, even as we sigh over their failings, will inevitably be inspiring others to follow in their wake”. Moran thinks we are all working on a “massive patchwork quilt called ‘A Better Future’”, and that anyone should be able to sew a patch on.

I enjoy this vision. But I still think that people sewing their individual patches should agree to some very basic ground rules. Things like not fucking over their brown and black sisters, or assuming all feminists have disposable incomes, or that we are all able-bodied. Moran cannot be expected to be everything to everyone, but she can attempt to broaden her own understanding of the travails of other less privileged groups.

I was really uncomfortable with her column ‘It’s all about how you say it’, which is a lecture in how to communicate on social media. Moran’s lesson for us is essentially that we all need to be more polite: “There really is no more urgent place to be relaxed and polite than the internet. It’s a basic survival necessity. If you are to be an effective radical, then you must be a polite radical – which is, of course, the best kind of radical.” Sometimes we need to get angry. Why shouldn’t black women, who have so very many reasons to be angry, be able to express their pain and anger openly, for example? When the state is freely executing black men and women, I don’t think your number one priority should be not to upset anyone on Twitter.

Pick up Moranifesto. Prepare yourself with the knowledge that it should be half the size it is

Ultimately then, I think Moranifesto can be enjoyed if you recognise that Moran shouldn’t be expected to represent all of contemporary feminist thought. I don’t think this excuses her for being problematic though – Moran has a huge platform, and she needs to recognise the unique position that gives her. If there are women and men out there whose only interaction with feminist thought is via Moran, then I do feel that Moran should be accountable for ensuring that her writing at least recognises intersectional concerns.

Pick up Moranifesto. Prepare yourself with the knowledge that it should be half the size it is. And accompany it with some reading by other, also imperfect, but more intersectional feminists – Moran can be enjoyed, but should not be enjoyed uncritically.

Moranifesto by Caitlin Moran is published by Ebury and is available to purchase HERE.

The image is the cover of the book and is used with permission. The title ‘Moranifesto’ appears in the centre, in red block-capitals. Either side of it, is the author’s name, Caitlin Moran. There is a photo of Moran in front of the lettering, jumping in the air with her arms splayed out. She is wearing a black shirt, black jeans and canvas shoes. Above the author’s name, it says ‘Bestselling Author of How to Be a Woman’.