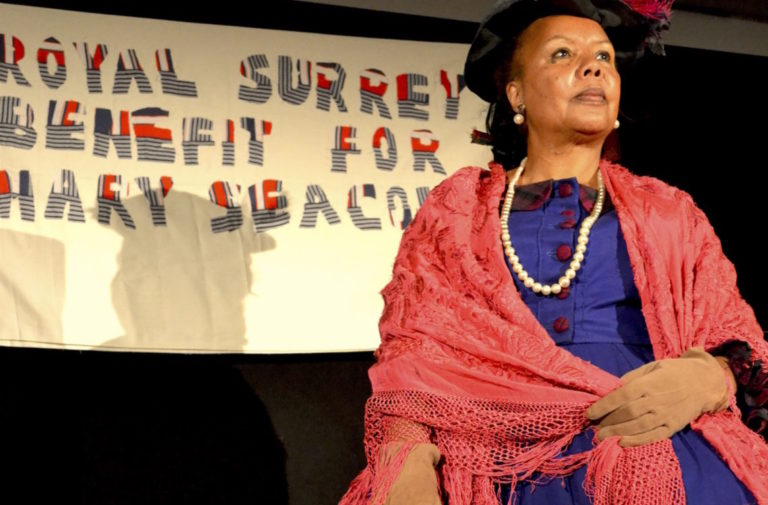 Theatre and Dance at the Edinburgh Fringe – part four

This one-woman play tells the true story of Mary Seacole in her own words. Seacole, played by Cleo Sylvestre, was born in Jamaica in the early 19th century and went on to have an extraordinary life. Not only did she travel to the Crimea to nurse British soldiers at the front, she also traded goods in England, ran a hotel in the USA and tried her hand, unsuccessfully, at prospecting for gold.

Sylvestre is a very accomplished and experienced actor, but in this role I feel she has a lack of dynamism which makes the play as a whole fairly one-note. Having said that, when she occasionally slips into other characters, her accents are all flawless and there is a warmth and a gentleness to her stage presence which is engaging.

Seacole’s story touches on British colonialism and racism, and there is a strong suggestion that Florence Nightingale would not accept her at her hospital not because of her lack of nursing experience but because of the colour of her skin. The indefatigable personality, optimism and entrepreneurial spirit of Seacole come through strongly, and I enjoy hearing about this relatively unsung British-Jamaican hero. Integrating storytelling, poetry, music and dance, Mara Menzies gives a powerful performance, portraying seventeenth-century Angolan Queen Nzinga. Tracing her story from old age to childhood and back again, Nzinga tells her own story of her rise to power as she defends her people, resisting the rule of the Portuguese.

Seamless scene changes shift the story through time, as Nzinga grows from a young woman standing up against the Portuguese (landing her in trouble with her father) to leading the Mbundu people’s resistance to slavery and theft of their lands at the hands of invaders following her brother’s suicide.

Nzinga is remembered for being a bold and fearless negotiator, and Menzies’ magnetic portrayal displays a woman driven by the pursuit of justice. There is never any doubt in her mind that power can be hers. Yet, we also see vulnerability as she recognises the personal cost of her ascent to the status of Queen.

Menzies’ production brings the past to life with drama, gravity, and captivating storytelling. This is a chapter of history not widely known in Western Europe, but one now gaining the exposure it deserves.

The Great White Males embody stereotypes of establishment figures, from banker to landlord, and are held up as role models in a parody of alpha-masculinity God is a woman. Thank you to Lucy McCormick and her accompanying angels for her pop song-filled, profane, distasteful and very funny re-writing of the New Testament in three acts. Directed by Ursula Martinez, McCormick boils the material down to just what she considers to be the important parts and never has the Bible been so engaging.

I find it very difficult to describe what happens in the show in a way that does it justice. Certainly some audience members might find it offensive – two people leave visibly disturbed at the performance I am at – however I personally love it, as do the two elderly ladies sitting next to me.

This show is cheeky, clever, gender-bending and life-affirming. I urge you to see it if you can. Scary Shit “is a show about friendship, being a woman and asking for help”. It is also a show that interrogates how mental health is linked to the specific experiences that women are exposed to and have to deal with, such as sexual violence, and the impact of that. Whilst these themes are not explicitly explored from a political point of view this is very scary shit indeed. The personal nature of the show also has a broader resonance.

It takes me a little while to navigate the layers of this piece; it’s great but not always easy or comfortable viewing and it uses a mixture of performance modes from experimental performance to contemporary dance. I like how the caring Maddy Morgan gets more and more exasperated by Rhiannon Faith demanding help – which questions the contradiction of how when we are in need of support we should ask for help, and yet also take care of the people who are taking care of us. The show is confessional and I admire the performers for their honesty and bravery. Despite the therapy sessions being carried out on stage, the show doesn’t feel like onstage therapy. It’s a poignant and important piece of work that still resonates with me and no doubt will continue to do so for a while. In this glorious explosion of ideas, Rachel Clerke and the Great White Males take us on a punk music-fuelled journey that unpicks the post-war utopian dream and holds its ugly legacy up to the light for all to see.

The Great White Males embody stereotypes of establishment figures, from banker to landlord, and are held up as role models in a parody of alpha-masculinity, showing their ubiquity and potential to damage.

Through its nuanced critique of post-war architecture and town planning, Cuncrete exposes the methods by which we’ve come to live in a world where owning one’s own home, once seen as the ultimate ideal, has become unrealistic for many people in the UK.

Playful yet unabashedly political, it’s a fearless indictment of those who claim to represent the public interest but ultimately pursue glory and profit for themselves, speaking of the need for social mobility yet pulling the ladder up behind them. Truly, a show for our times.

Image 1: From Marvellous Adventures of Mary Seacole, used with permission. Cleo Sylvestre as Mary Seacole stands on the right of the photograph, looking to the right. She is wearing a blue dress with a crinoline, a pink shawl, a hat and gloves. Behind her on the wall is a banner which reads “Royal Surrey benefit for Mary Seacole”.

Image 2: From Nzinga Warrior Queen, used with permission. Mara Menzies as Nzinga stands sideways to the camera. She holds a small pot in her right hand and is rubbing her left hand along her right arm. She is wearing a headscarf. Behind her there are shadows on a light brown screen.

Image 3: From Lucy McCormick: Triple Threat, photograph Tamsin Drury. A photograph of a woman leaping into the air. Her legs and arms are all bent, with one leg bent in front of her and one leg bent behind. She is wearing men’s y-fronts and boots. There is a grimace on her face. The photograph is in a very muted colour scheme, but you can just make out a man jumping in the same way behind her.

Image 4: From Scary Shit, photographer Rhiannon Faith. A performer stands on stage singing into a microphone. She is is in a lunging position. She is wearing white shiny leggings, on top of which she is wearing pink furry knickers. There are also bits of pink fake fur stuck to her knees. She is also wearing a white shiny top, white shiny wellington boots with pink fur around the tops and a crash helmet covered in pink fake fur. Behind her a pink paper heart can be seen with the words “SCARY SHIT” written in gold.

Image 5: From Cuncrete, photographer Paul Samuel White. A woman wearing a suit and with facial hair drawn on her face sings into a microphone. She is side on to the camera and leaning back. There are plywood strips stuck to her shoulders, in the same place that you would expect to see angel wings. She is in darkness with a bright light behind her. In the background a figure playing a drum kit can be seen.