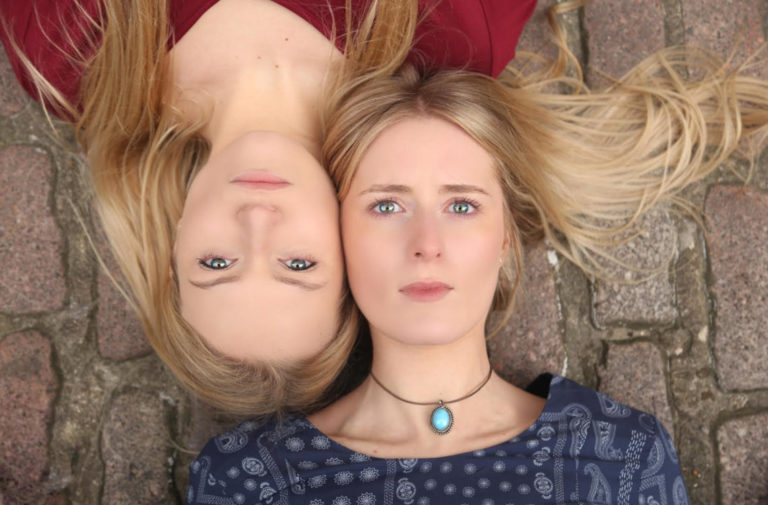 Octavia Gilmore and Emily Schofield of Biting Block Theatre have co-written this piece of theatre about friendship, lies and deception in which they play friends Flo and Becka. As is the spirit of the Fringe, where all sorts of spaces become venues, this show is performed in the basement of the Natural Food Kafe in the Southside, which makes for an unusual yet intimate setting. Gilmore and Schofield draw the audience in to an intense drama which starts off as an innocent catch up between friends and then unfolds with shocking revelations, unsolicited advice and a sinister ultimatum.

The play touches on some feminist themes such as motherhood, abortion and the frequently discussed question of whether women can ‘have it all’ when it comes to career and family. Amid the tension, there are a few welcome moments of unexpected humour and just when I think I know where the plot is going, another twist surprises me. Gilmore and Schofield are accomplished performers and I find myself hooked by the powerful simplicity of this piece of theatre. All the things I lied about
Until 29 August, 16:40, Paines Plough’s Roundabout @ Summerhall
Reviewed by Lauren Hossack

This is not a TED talk, though Katie Bonna wishes it was. Mirroring the format of one, she takes us through her many brushes with deception, beginning by considering the claim by some journalists that we are now living in a ‘post-truth society’ .

The show is initially light and upbeat. Bonna asks the audience if we consider ourselves relatively truthful, and it seems most of us in the audience do. “So did I,” Bonna says, but then she started keeping a lie diary (or “liary”) and discovered this wasn’t the case. The untruths only build from here, Bonna’s warm, engaging manner keeping us enrapt.

I leave the tent feeling lighter, but find myself mulling over the show’s somewhat provocative title. What had I, and the rest of the audience, expected to hear? Did we go along to take pleasure and amusement in Bonna’s confessions?

While it’s not short on humour, All The Things I Lied About is about much more than getting cheap laughs from being found out. In examining how, when and why we lie, Bonna has created a highly compelling show. Peppered with plenty of laughs, it also serves to reveal some uncomfortable truths, inviting our judgement upon the actions she describes, yet ultimately offering the hope of living a more truthful life. This heart-warming tale puts a fun, feminist twist on the story of the Little Mermaid. Instead of meeting a prince, the sea-dwelling heroine meets her favourite pop star on dry land, mesmerised by the music she longs for.

A glitter-covered coming-of-age story, Pond Wife cleverly examines the simultaneous empowerment and entrapment young women find in pop music. While the mermaid finds freedom and belonging in the songs she loves, pop star, Lucky, isn’t so fortunate, instead finding herself at the mercy of her producer.

Duo Holly&Ted dance, quote and lip sync their way through 1990s and early 2000s pop classics, infusing the show with comedy and giving it a very light-hearted feel. Minimal set, props and cast are all cleverly employed in the storytelling. Using two actors to portray a whole cast of characters generally works well, though there are some moments where the transition from narration into character-based scenes isn’t immediately clear.

Paying tribute to pop icons that 90s kids will remember from their own childhoods, Pond Wife evokes nostalgia and also empathy for the mermaid who longs to belong. It’s a colourful ode to growing up, and one that 20-something Fringe-goers in particular will enjoy. How is Uncle John?
Until 29 August, 15:00, Assembly Hall
Reviewed by Lissy Lovett

How is Uncle John? is a two-hander play written by Sally Lewis about trafficking. Holly Joyce plays the mother of a young woman, Hope, played by Naomi Stafford, who is coerced by a manipulative boyfriend into leaving her country and becoming a sex worker.

Joyce and Stafford both give excellent committed performances, but my overall impression of both the writing and its production and direction is that this is a quite disjointed piece of work. Neither character ever interacts directly, instead they perform intertwined monologues, which are sometimes seemingly directed at the audience and sometimes at other unseen characters in the story. There are stylised lighting and sound effects, repetition of snatches of dialogue and moments of physical theatre, but these all seem to be from different styles of play and don’t work together as a whole.

Having said this, I appreciate the flashback scenes to Hope’s childhood where she is objectified early on by both men and boys, positioning her later experiences in a continuum of female sexual abuse and control. The mental health difficulties of the mother’s character also help demonstrate that trafficking is related to other social and political issues which need to be tackled together.

There are important ideas in How is Uncle John?, however unfortunately the writing is a little too uneven to do them justice completely.

F-Word readers can get 2-for-1 tickets for How is Uncle John? at EdFringe if they quote the promo code MOTHER. Expensive Shit is a gorgeous, evocative and, at times, disturbing play. With a cast made up of four women of colour, it tells the story of a Nigerian woman, Tolu, working as a nightclub toilet attendant in Glasgow.

From Glasgow the story flashes back to the toilets of the Shrine nightclub in Lagos where the younger Tolu dreams of becoming a dancer in the revolutionary band of the late Nigerian musician, Fela Kuti. There are some energetic and beautiful dance sequences to the music of Fela in the Nigerian scenes, which are my favourite parts of the show and demonstrate a solidarity between the women.

This same solidarity is not always present in the Glasgow scenes due to the different social statuses of the characters. There is a dark undertone to the play which pits the women against each other, bringing up interesting questions about class privilege, citizenship and exploitation. Without giving away the ending, the play leaves the audience in no doubt about the people who are actually doing the exploiting and who have the control: it is the men who aren’t on stage, men whose actions take advantage of vulnerable women looking for stability, money and affection.

Expensive Shit packs in quite a punch in its 60 minutes. It raises a host of questions which are current, provocative and with few easy answers. The Interference has great energy and pace and is particularly relevant considering the current focus on the prevalence of rape culture and the rise of social media. It tells the story of a student who is raped by the college’s star athlete and her fight back afterwards. The play has a US cast and the story has particular resonance in light of the Brock Turner rape case.

The Interference powerfully highlights the epidemic of rape and sexual violence on college campuses and the toxic ideology of victim blaming. I find the play utterly engaging: it develops the audience’s sympathy for the survivor as well as a sense of anger at not just the unseen rapist, but everything that upholds rape culture – the constant drip-drip of social media feeds, news commentary and analysis which puts all the responsibility for the incident on the victim. The questions spoken on stage are the questions that come up time and time again in cases like these: what was she wearing? Why was she so drunk? Why didn’t she fight back? Why didn’t she cry out for help?

In the play the student fights back using the legal system and eventually the media. Despite every effort to silence her, she fights for her voice and for her survival. An enthralling and compelling play.

The first night of The Interference was dedicated to Scotland’s Rape Crisis charities.

Image 1: From Catching Up, used with permission. A photograph of two women. They are lying on cobbles with heads next to each other and photographed from above so that in the photograph one of them looks like she’s upside down. Both have blonde hair and they stare seriously up at the camera.

Image 2: From All The Things I Lied About, photo credit – The Other Richard, [email protected] Katie Bonna stands in the middle of the Roundabout Theatre. She is standing on a round red rug, with a box labelled “BALLOT BOX” in front of her. She’s reading out of a book. Behind her the seats of the theatre can be seen, and above her the LED lights of the theatre.

Image 3: From Pond Wife, used with permission. Ted, on the right of the photograph, holds on to Holly’s, on the left of the photograph, shoulders. She is looking towards the camera and smiling. Ted is looking at her. Holly is wearing a gold headphones and microphone set and wearing a green sparkly top. Ted is wearing a white t-shirt and glasses. Behind them is a metallic green backdrop.

Image 4: From How is Uncle John?, used with permission. A photograph of Holly Joyce as Mother on stage, she is wearing a grey t-shirt and is looking to the right as if she is deep in thought. On the right hand side of the photograph is a coat stand with a hat and coat on it. On the left hand side the back of a chair can be seen. Everything apart from Lewis in the photograph is very dark, so she stands out.

Image 5: From Expensive Shit, credit: Sally Jubb. Four women dance on a stage, from left to right they are Sabina Cameron, Diana Yekinni, Jamie Marie Leary and Terri Ann Bobb-Baxter. Behind them is a tiled wall with corrugated metal above it. All four women face forward and look like they are singing. They are bathed in warm light.