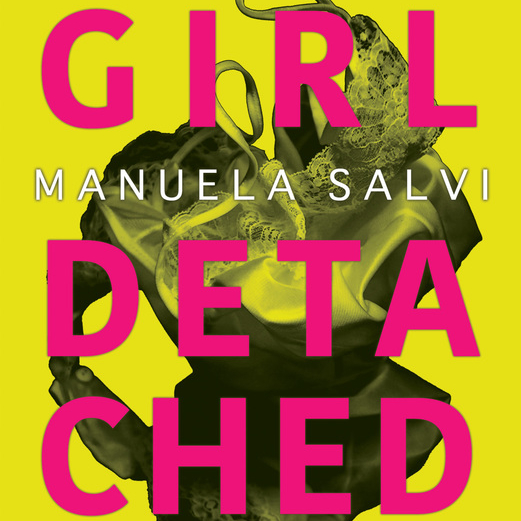 A voice that refuses to be silenced Manuela Salvi refuses to be silenced. Her book for young adults, Girl Detached, now translated from Italian into English by Denise Muir, was censored in her home country of Italy due to ‘strong’ content. As the tagline says, it was “so bold, they banned it.” With Girl Detached, Salvi seeks to amplify the voices of young women who have been exploited and traditionally kept silent. Her voice is strong, uncompromising and powerful.

Girl Detached gives a bluntly honest account of a vulnerable girl, Alek, being purposefully targeted by her peer, next door neighbour Megan, and indoctrinated into a ring of underage sex work. Megan seems to be the popular girl who has no remorse, however she is equally desperate to please her abusive older boyfriend – whatever the consequences. It’s a cycle of violence and manipulation which spirals out of control, resulting in exploitation, victim blaming and a fight for the truth.

The theme of vulnerability is reinforced with a physical manifestation of Alek’s anxiety: she stutters her speech. Alek has learnt to manage this through acting and putting on a character’s persona of confidence.

It’s not easy being sixteen with a stutter. The only time Aleksandra comes alive is on stage, freed by the words of the characters she plays.

Enter Megan, and her boyfriend’s mate Ruben. Ruben’s not like anyone else. And, for some reason, he’s all over Aleksandra. Expensive presents, brilliant dates and a way in to the wildest parties. But Ruben wants Aleksandra to play a role for him, and it could destroy her.

Girl Detached deals with the unpalatable realities of the grooming of underage girls, abusive relationships, body image and peer pressure. We’ve seen the fallout of cases similar to this in the media from Oxford to Stanford, with young women always the ones bearing the brunt of the abuse from society’s warped reactions whilst rapists walk free. Girl Detached is an unflinching examination of power, consent and rape culture in today’s society.

Playing on the well-worn narrative trope of the makeover, Salvi explores how it can be used as a disguise, a confidence boost and a means to erode identity in order to fit into the conforming view of femininity under the male gaze

Navigating the rocky path of grief, a new home and new school is not easy for Alek, who leads a sheltered life having been raised and repressed by her grandmother. She soon succumbs to the pressure from her new circle of friends to transform, shedding childhood naivety and becoming aware of womanhood. When she is forcibly thrust into the spotlight of a world she has not been prepared for, she is swept away by the attention.

Playing on the well-worn narrative trope of the makeover, Salvi explores how it can be used as a disguise, a confidence boost and a means to erode identity in order to fit into the conforming view of femininity under the male gaze.

Salvi also touches on the themes of motherhood and abandonment throughout the text. Alek was abandoned by her mother and raised by her grandmother. Her father is long absent, her conception the result of a young love affair which meant that her mother was thought to be too young to look after her. But as the story unfolds it becomes apparent that all is not as it seems. The chance of reconnection gives a thread of hope and support beneath the tragedy.

Megan’s mother is initially portrayed as an interfering presence, but soon reveals herself to be a strict but concerned parent who is rightly worried about the trouble her daughter seems to be getting into. She does not know that her daughter’s hobby of fashion design, which she deems superficial and pointless, is funded by selling sex. Megan’s sex work lacks agency due to both her status as an underage child and the outside influence of the abusive pressure of her boyfriend/pimp.

Salvi is also concerned with the seductive power of money and its links to self-worth and independence. Moving schools, Alek is preyed upon by a clique of girls who have been taught to use their sexuality as currency. Peer pressure and a desperate desire to fit in and find a friendship group makes the ‘falling in with the wrong crowd’ narrative take a decidedly dark turn.

Used to being overlooked, the attention of a young man who is applauded and uplifted by her peers gives Alek a sense of belonging and confidence she had previously lacked. However, her unease is palpable, and it is the money thrust into her hand which gives Alek pause for thought.

It’s bitterly cold. The window’s wide open and the first light of day is filtering in. It was all a dream. Then I feel something beside me, on the bed. Pieces of paper. I take a better look, forcing my eyes to stay open.

It’s money. A lot of money.

In this way, the sexual abuse is shown to be an abuse of class privilege; Salvi emphasises the way in which the young women’s economic standing is tied into the sexual politics of the situation. The women defer to Alek’s boyfriend, Ruben, because of his position of power and social influence. It’s a misogynistic power play.

Salvi explores the idea of consent in ways which are particularly poignant at the moment, both in terms of intoxication and technology. The physicality of the acts which Alek is coerced into performing by her boyfriend is glossed over in a haze of drugs and alcohol under the guise of partying and having fun. However, through the vivid flashes of description that seep through this desensitised distancing from the present, Salvi gives the reader a sense of both the degradation and desperation Alek faces in these moments. It is telling that it takes her over half the book to use the word rape.

When the abuse is exposed, individuals’ reputations are held in higher esteem than the safety of women and girls. Being intoxicated is deemed by the wider society as having given permission, despite a lack of consensual participation in the acts. The claustrophobic feeling of a small town mentality, formed by close knit communities who are willing to protect each other but place a lot on reputation, is well described.

The book is a horrifying example of patriarchy and privilege trumping the protection of rights for underage girls. It’s also a damning account from Salvi of the way society refuses to believe the word of young women, no matter the validity of the evidence put in front of them.

Society tries to silence the voice of the abused; Salvi’s book is all about being present and being heard

But beyond the story of her entrapment, Alek also has a fierceness and a determination which manifest in her acting talent. She is part of a youth group of misfits known as the Ship of Fools. In this group she finds the friendship and support to carry her through the pain of her mistaken connection with Ruben. This plot element gives the novel an overall feel of hope, redemption and friendship built on trust, support and belief despite the abusive relationships elsewhere in the text.

Girl Detached is a compelling read: defiant, powerful and blood-boiling. Like Louise O’Neill’s Asking For It and Courtney Summers’ All The Rage, it is easy to see why some might think it unsuitable for young adults. However this is arguably exactly why young women should be able to read stories such as these: to rip away sheltered, uninformed and unsafe naivety and face the world with knowledge. Society tries to silence the voice of the abused; Salvi’s book is all about being present and being heard. This brave, important text not only confronts you, it demands you listen.

Girl Detached is published by Bucket List Books,an imprint of Barrington Stoke, on 8 September. It is available to be purchased here.

The image is of the front cover of the book. The words “Girl Detached” are written in bright pink letters in three rows of four letters each, so it reads “GIRL DETA CHED”. The authors name, Manuela Salvi, is written in white letters between GIRL and DETA. All of this is over a yellow background with a cutout black and white photograph of lingerie on it. At the bottom of the cover it says “Such a brave book! Now I know what it feels like to have my heart taken for a ride, and then dumped. Melvin Burgess”.