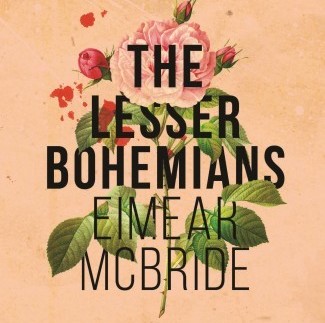 The dark side of romance Eimear McBride is not afraid to challenge her readers, through both her style and content. Her first novel, A Girl is a Half-Formed Thing (2013), marked the beginning of her exploration of the world of abuse, shame and sex, and The Lesser Bohemians delves even deeper into this uncomfortable area. McBride takes the classic love story of the caddish older man and the innocent younger woman and twists it until it is almost unrecognisable. Both Stephen and Eily are haunted by childhood abuse, causing them to seek ways of reclaiming their bodies and minds from the trauma of their pasts.

The romance narrative of the older, experienced man initiating the younger woman into the world of sex and love is a familiar one, but The Lesser Bohemians subverts this well-known tale into a study of love and sex which is both intimate and, at times, brutally realistic. McBride’s descriptions of the couple’s sexual encounters are detailed in a way which boarders on the pornographic, but the emotional dimension of the couple’s union is made evident in a way that allows the scenes to toe the line. The detailed descriptions of sex serve to expose the truth of sexual encounters; to reveal both the pleasure and the messy minutiae of having sex. Furthermore, her depiction of the rich internal worlds of both Eily and Stephen adds a depth to their characters which pushes the novel far beyond the standard romance narrative. The fact that we have access to Eily’s stream of consciousness through McBride’s fluid, poetic language means that she is elevated from the stock character of ingénue to a real woman experiencing her first love affair.

Stephen and Eily’s sexual relationship is shown to be therapeutic to them as they work through the abuse they have suffered. Both are trying to reclaim sex as something that they choose, which is neither compulsive nor forced upon them. Eily likes that Stephen does not just see her as “bits of body” but kisses her “like he’s with some person who can be liked and kissed”. The rejection of traditional language structures allows McBride to express aspects of female sexuality and the sensations and emotions involved in a woman’s first sexual encounters in an honest and intense way:

But getting precise with his hands. My grey straps simple tugged down. Then where he slides one of mine so I Jesus! I eyes wide. This isn’t a game. This is already well underway.

In depicting these intimate moments, McBride is sensitive to how awkward and comical the act of sex can be. In various sex scenes throughout the novel, the fumbling parts of sex are explored – removing the socks, getting the condom, undoing the bra – in order to move the couple’s encounters away from the kind of unrealistic sex which we see so often in romance novels. McBride’s intention seems to be to break down this myth, and to show sex as a more varied experience.

This is certainly not a romanticised deflowering, but a look at the way in which even moments initially fuelled by mutual desire can turn into a non-consensual encounter

However, the night that Eily loses her virginity demonstrates that this is not a straightforward case of “two damaged people healing each other through passionate love”. This first sexual encounter is one of the moments during the novel when the sex between Eily and Stephen is not depicted as consensual – something which has been overlooked in some of the reviews. Yes, it seems that Eily does have some desire to be hurt during sex, potentially out of a misplaced sense of shame about her past, but there are certainly parts of the novel where it is evident that she is no longer a willing participant in their sex. It becomes upsetting as Eily clearly detaches herself from the situation as the pain and shame overwhelm her. Her call for him to “[j]ust stop fucking talking and come and be done” is responded to by Stephen with his own angry humiliation, which quickly turns to sex which is clearly against Eily’s will:

I can’t tell how long until – so far in – the gritting and fucking starts becoming every sex sound I’ve ever heard, all at once in my ear, while his body works through every single thing it wants. And mine, in his best moment, silent, accepts the mess it’s made.

As Eily’s first sexual experience in her adult life becomes an unwanted one, her complex and shameful relationship with sex is brought to the fore, leading her to blame herself for the situation. McBride doesn’t scrimp on the bodily details, nor the emotional effects, as Eily goes into the toilet afterwards: “Piss and blood in the dark and wish I’d never have to face him again”. This is certainly not a romanticised deflowering, but a look at the way in which even moments initially fuelled by mutual desire can turn into a non-consensual encounter.

McBride makes it clear that we cannot talk of “past” abuse – abuse can never be contained within the vault of memory, and will always come spilling into the present day

The novel is haunted by shame as McBride skilfully uses language to meld the past and present into one. It becomes obvious that Eily was sexually abused by a family friend and Stephen was victim to his mother’s incestuous advances, experiences which both characters attempt to cut out of their present through self-harm and self-destructive behaviour. For Eily, the past keeps intruding on her present in a very tangible way during sexual encounters:

When I was little someone used to and now I don’t think I can any more. And the past sits forward and the cold comes pouring in.

In McBride’s fluid, uninhibited flow style Eily’s thoughts move seamlessly between her childhood and the present, expressing the way in which, for her, the abuse is still very much a part of her life. In this way, McBride makes it clear that we cannot talk of “past” abuse – abuse can never be contained within the vault of memory, and will always come spilling into the present day.

For me, this novel subverts the traditional younger woman/older man romance narrative to reveal the complexities that are involved in a sexual relationship. Eily and Stephen are richly complex characters with difficult pasts which affect the way they behave in relationships and view sex. They are not simply one dimensional characters who fall in love and live happily ever after.

McBride’s use of language captures female sexuality in a truly intimate way, bringing together the emotional and physical aspects of sex from Eily’s perspective in a departure from the traditional romantic figure of the innocent virgin. However, the issue of consent is one that I found problematic in the novel, and it is difficult to believe that Eily and Stephen’s relationship is truly healing as they continue to hurt themselves and each other. I couldn’t help but read it more as being about a relationship which is ultimately damaging and addictive – an exploration of the dark side of a passionate affair. And as Stephen is still eyeing up girls even in the idyllic closing scene in the novel, it seems that McBride is suggesting that there will be no happy ending.

The picture is of the book cover. The central image is of a pink rose with a long stem and flowers. There are darker pink rose buds coming out the top of the flower around the flower head. Around the flower head and rose buds there to the left there are some blobs of what looks like blood. The title of the novel, The Lesser Bohemians, is written over the flower in the centre of the cover with one word on each line and then the author’s name, Eimear McBride, with one word on each line underneath this. All text is in a black font in capital letters, with the title of the book in a bolder font than the author’s name.