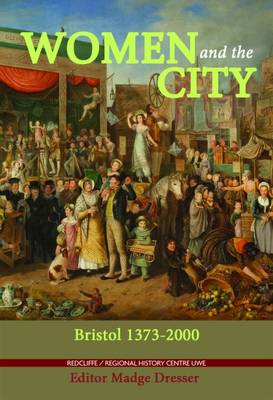 History has a way of erasing women. In the UK, as children we often learn about monarchs (thanks, primogeniture), wars (with combatants largely being male) and politics (which has excluded women, first legally and then structurally). There are a few women along the way, but any time spent studying them will dwell on how unusual they are.

Therefore, books specifically focused on women throughout history help redress the balance. A localised history, such as Women and the City: Bristol 1373-2000, has particular potential, given that, as it is put in the introduction, “most women who took part in public activities took part at a local level”. That means that where a big picture national overview might give a generalised or hazy view of women’s places in shaping or experiencing the events of the times, a zoomed in look at one city can engage more closely with the details of women’s lives.

Unfortunately, the erasure of women has not just happened when deciding curriculums; this is a problem that goes way back. Of course, on almost any subject, the further back you go, the more there is a paucity of source material. This is a particular issue with women’s histories, though, as it isn’t only the case that sources may be missing or incomplete; often women’s lives were simply not seen as important enough to record in the first place.

To some extent, the historians involved in this venture have been able to use lack of data as evidence. For example, Peter Fleming, who writes the chapter ‘Women in Bristol 1373-1660’, looks at Tudor subsidies, which were levied on Bristolians worth at least £1 in terms of annual property income or wages. Although 225 people were assessed on wages, none were women, which means that none earned a wage this high. In this instance, women aren’t being recorded and we can take from this that women (surprise, surprise) are either low paid or unpaid.

I also appreciated the range of sources used to theorise about women’s activities in Bristol. Madge Dresser, in her chapter ‘Bristol Women in the Long Eighteenth Century c.1660-1835’, uses a detail from a painting of a Bristol quarry to show women quarry workers in the late 1700s. I found this particularly interesting because it wasn’t a role I would have assumed would be open to women. In fact, as Victoria Barnes shows, the sectors women were employed in were varied, with women working in 163 different occupations in 1830. Certainly, it would be a mistake to see women’s participation in the workplace as linear; Dresser emphasises that women were much more involved in medicine at the start of the period she is focusing on, before it becomes viewed as an exclusively male area.

One of the difficulties throughout the book is understanding context. It is helpful when comparisons are made with other cities or the entire nation. For example, in Bristol in 1803, 20% of registered friendly societies (where working people paid into a fund to finance their funerals or give them aid in times of need) were for women, compared with 5% as a national average. This is probably related to a higher proportion of women in the workforce, particularly service and manufacturing. Elsewhere, however, facts and figures are given without this sort of context. Sometimes the writers acknowledge this, calling for more localised research in comparable cities, but other times the reader is left nonplussed. Even when comparisons are made, they can be incomplete; for example, the reader is told by Dresser and June Hannam that pay in Bristol, at 9/- to 11/- a week in some trades, was low compared to other regions – but not told what pay in other regions might be.

In addition, at times the writers dwell on women who, for some reason or other, have stories that have been recorded. Sarah Maria Guppy, for example, was a talented inventor who seems to have influenced Isambard Kingdom Brunel in his design of the Clifton Suspension Bridge, as well as holding patents for many inventions. Her life and creations are certainly interesting. However, the number of pages dedicated to women who were exceptional means it is easy to forget what normal might have looked like. I understand the desire to write about lives that are perceived to be more interesting and the frustration of lacking source material, and I also think there is worth in bringing attention to women about who we do know more than normal. More could be done to emphasise the distinction though, to avoid suggesting that other women had the same opportunities.

Hannam and Moira Martin, in their chapter ‘Women in Bristol 1835-1914’, write about the trend of wealthy women attempting to ‘rescue’ women from “moral danger” – which normally meant sex work

There is some evidence in the later chapters of writers attempting to engage with histories of women of colour and different religions, partly with more records and partly with Bristol society becoming more diverse. However, as a port city, Bristol was heavily involved in the slave trade. I am surprised at the non-critical way women’s involvement and perpetration of the slave trade is described by Dresser, who writes that “Bristol’s slave trade afforded some opportunities for women”. It is true that numerous women were suppliers for slave ships or had stakes in them, so those could be described as “opportunities”, but there should surely be some condemnation of this, as well as an attempt to explore the lives of women who were enslaved.

This is not the only time that we see evidence of women of Bristol contributing to oppression (whether it is called out by the writer or not). Hannam and Moira Martin, in their chapter ‘Women in Bristol 1835-1914’, write about the trend of wealthy women attempting to ‘rescue’ women from “moral danger” – which normally meant sex work. Moral judgements were made in order to decide whether individuals were worth saving, as those who “lost character, by dishonesty or any other way” would not be eligible. There are numerous other examples throughout the chapters of upper-class women using their power to oppress other women or represent them without experience or consent.

Overall, Women and the City is a useful start in understanding the lives of women in Bristol. As an academic book, it is best suited to those who have an interest in a specific period. In some instances, it suffers from focusing too much on individuals, does not contextualise sufficiently and lacks critique or commentary around some important topics. However, given the lack of source material, it will hopefully be a good starting point for other historians and promote the need for similar and extended localised work.

The image is a picture of the cover of the book. It depicts a historical painting showing a scene which appears to be occurring at some form of entertainment event or in a marketplace. In the background there is what could be an open-air stage. There are stalls in the foreground, with a basket of fruit overturned and spilling out onto the ground. There are also crowds of people clustered together, along with various animals including a monkey, a dog and a horse. The words ‘Women and the City’ appears above the painting, ‘Bristol 1373-2000’ appears below.