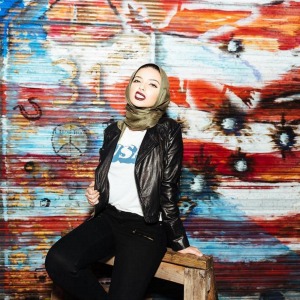 A hijab in Playboy is still not progress When one thinks of unlikely pairings, pigs and flying come to mind. Or perhaps Donald Trump and advocacy. Until recently I would also have included the words Playboy and hijab. This is no longer the case. Noor Tagouri, a 22-year-old Muslim journalist and motivational speaker, has been featured in the October 2016 issue of Playboy, titled Renegades. While she isn’t the first Muslim to appear in Playboy (the German-Turkish actress Sila Sahin posed nude for it in 2011), she is the first hijab-wearing woman to do so.

According to Playboy, these renegades are “unconventional men and women who aren’t afraid to break the rules”. Tagouri fits that bill. She is a popular reporter for Newsy and an activist who created a clothing line to tackle sex trafficking. She has also experienced political Islamophobia firsthand when she was harassed for attempting to record a court hearing in Tennessee. Clearly she is a woman who’s showing the world that Muslim girls can be educated, opinionated, strong and, well— anything they might want to be. She is proud of her femininity and also of her faith. One needs look no further then her YouTube vlogs and Instagram feed to see how she merges the two.

Perhaps this exposure for Tagouri is a good thing. She’s showing a new audience that Muslim women are complex, intelligent and powerful, rather than simply being passive and subdued.

Here is where I think things get complicated. While Playboy no longer has fully nude centrefolds, it still shows women wearing very little and often in sexualised poses, photographed for the heterosexual male gaze. That hasn’t changed. Playboy still presents women as beautiful, sexy commodities for men to look at, and it continues to make money from the way in which it objectifies women. Tagouri may be wearing jeans but she’s in an edition which features other women’s topless bodies, and those women are still presented as objects not subjects. Playboy is, for want of a better word, still Playboy.

There is also the issue of female representation. Tagouri is pulling faces and posing defiantly in the shoot but she is a stunning woman with immaculate makeup and styling. Playboy is telling us she is worthy of reader attention because she is smart and eloquent but also because she’s beautiful; she has in their own words a “beauty-ad-campaign look”. There it is! Her worth appears intrinsically bound to her beauty.

This in turn raises the idea of normalising one appearance of the Muslim female Other. Tagouri wearing a biker jacket and skinny jeans, and standing in front of the US flag is safe. The message is that “she’s not dangerous, she wears converse! She’s not like ‘them’”. The implication is that those who cover up in a more conservative or less fashionable way than Tagouri are incompatible with wider ideas of what is accepted by Anglophone culture. She looks fierce and epic because she is, but her appearance is far more polished than your average hijab-wearing woman. One form of hijab becomes acceptable while others subsequently do not.

That said, I am appalled with the attacks on Tagouri from my fellow Muslims calling her names on her Facebook page, to non-Muslims commenting under the Playboy article, outraged that a brown woman wearing a scarf has been made visible to them. As a hijab-wearing Muslim myself I don’t think it is fair to say she is immoral or a sell out. She wanted to reach a different audience and she has. She wanted to show a positive representative of Muslims in a widely-read publication and maybe that has happened. There is validity in critiquing whether this was such a progressive move, and in starting a discussion whether Muslim women can reach wider audiences and present positive representations of ourselves without having to engage with a publication which has historically denigrated women.

Playboy might not be the ‘nudey’ magazine that boys used to pass around in school, but its core values haven’t changed. It still commodifies women and, let’s be frank, the decision to remove fully nude images was a pragmatic one (the desire to attract a younger reader who didn’t want to pay for pornography because it so freely available online). The lack of a topless centrefold doesn’t change the fact that Playboy still makes dollar from selling women. That’s why Tagouri being in there is a sore point for me. She’s not being provocative but this still isn’t progress. She ends her interview with this point: “We can continue to break barriers and glass ceilings and reclaim our power.” No one can argue against her ability to do that. Her appearance in Playboy was groundbreaking in a sense, yet I’m not convinced it should be celebrated.

Image is of a Noor Tagouri wearing a hijab, a black leather jacket and black jeans, against a wall full of graffiti. She is starting at the viewer and making a playful snarling face.