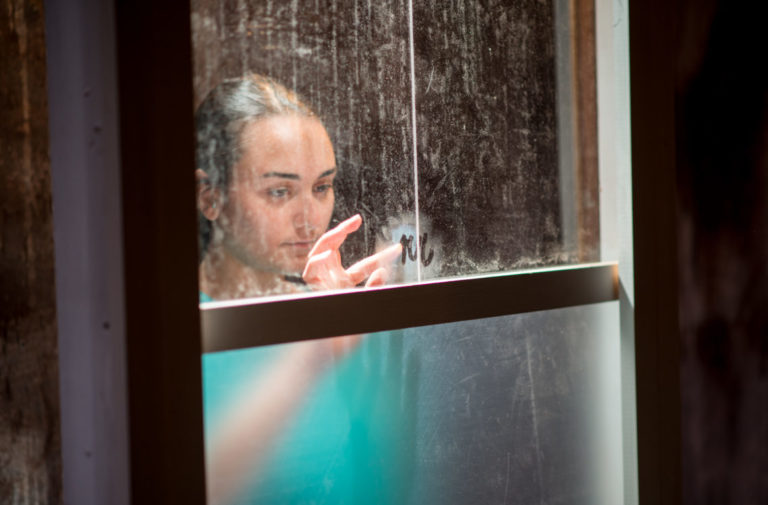 Shining a light on eating disorders

People with eating disorders are often reduced to a statistic; it is estimated that over 725,000 people in the UK alone are affected by one in some way. The underlying mental illnesses and traumatic experiences which often lead to these disorders are frequently under-acknowledged. The mainstream idea that bulimia is “when you throw up after eating” for example is only a very small part of the story. Writer and performer Nicole Zweiback reveals there is so much more to anorexia and bulimia with her poignant performance as Kira, the young Californian girl with an eating disorder at the centre of the play Bit of Sunshine.

After a successful stint at the Edinburgh Fringe, producers Bloody Deeds Productions and Kilter transferred Bit of Sunshine to Theatre503 in London for a very short run where it sold out on both nights. The theatre is the only Fringe venue in London to have won an Olivier award and the play itself won Best Play at the Lost Theatre One Act Festival this year. You could say I was somewhat excited to see if this new piece of writing lived up to my expectations.

Zweiback begins her performance as 11-year-old Kira, who giddily runs on stage referring to “Ana” (anorexia) and “Mia” (bulimia) as if they are her imaginary best friends, making you aware of how young and naive she is. What follows is a harrowing, albeit funny in moments, portrayal of what it is like to be a girl growing up with these illnesses. During the play, Zweiback also takes on the roles of other women, such as Kira’s older, worried and tired sister and the doctors and patients at the clinic Kira is forced to attend.

Although the performance is not necessarily easy to watch, it is easy to follow, with smooth transitions between characters and the stages of Kira’s life. The play quickly moves from Kira’s teenage years and her dreams of going to Oxford University to her admittance into a clinic, where she attends group therapy sessions and receives treatment. Kira slowly begins to accept her condition and comes to terms with the fact that she has unresolved grief from her parents being killed in a car accident when she was young.

Although Kira has this realisation, there is a sense of immaturity in her and the suggestion that she is delusional throughout the performance. She calls the clinic a “Carnival of Freaks”, distancing herself from the other female patients, yet she is just as ill as they are. Co-directors Katie Coull and Ed Theakston make the audience acutely aware of these aspects of her character: Kira is constantly running around stage, using hand gestures and energetic body movements that make her seem all the more young and confused.

These girls are shown to be in thrall to their disorders, but oddly at the same time they seem strong and resilient – why bear their illness alone when they can face it together, as women, as sisters?

The set consists of several chairs which she hastily moves around to form settings such as a group therapy session, her sister’s car and a doctor’s office. Her nervous young energy makes her likeable, which pays off in the darker, more sensitive moments where the audience empathises with her.

In the clinic, she meets an older woman called Polly and they become friends. Polly is an amusing woman who knows “the tricks of the trade” as it were: she tells Kira to gulp down two litres of water before her weigh-in so the nurses think she has reached her target weight and go easy on her. Kira looks up to Polly, and thinks she is brave because she isn’t afraid of dying. Kira however admits she is scared of death and wants to live, and the audience for the first time sees hope for her future.

Polly and Kira’s friendship is cemented when Polly suggests they do a “friendship purge”: they binge and then are sick together afterwards. Kira says this is like an initiation into the sisterhood. These girls are shown to be in thrall to their disorders, but oddly at the same time they seem strong and resilient – why bear their illness alone when they can face it together, as women, as sisters?

It is clear that Zweiback did extensive research into bulimia; her performance is honest and believable, particularly during her heated monologue where she uses technical language to illustrate the “halo treatment” Kira receives at the clinic. She describes this as essentially the act in which the oesophagus lining is ripped away to make space for new lining to grow.

The fact that Kira receives something called “halo” treatment reiterates the idea of her being almost angelic with her young, naive, girlish innocence. The lighting reinforces this as well, in one particular moment she is in darkness, standing in front of a mirror, with a single light illuminating her face. It is as if some sort of light is shining down on her, and she recalls how pure and weightless she feels after she has purged.

Bit of Sunshine belies its name. Upsettingly, we are lead to the conclusion that there is barely a glimmer of hope for Kira, and others like her, to recover fully from anorexia and bulimia. There rarely seems to be any sunshine in Kira’s life.

A lasting, haunting image at the end of the play is the last time we see Kira. She is 28, and after having miscarried, now has a four-year-old daughter. There is no mention of a father or a support network of family and friends; she appears to be completely alone. As her child munches on her breakfast, Kira turns away to throw hers up into the kitchen sink. It is a depressing thought, but there must be thousands of mothers across the world living with an eating disorder who are trying to bring up children at the same time.

Zweiback and the rest of the production team must be applauded for this work. Talking freely and publicly about mental illness is still often taboo in our society, so creating a platform for it to be spoken about in theatre can only be a good thing. I come away from the show with more empathy for all those who are sick after their meals, recognising that this behaviour is linked to much deeper experiences.

Photo by Jamie Scott-Smith. It shows Nicole Zweiback as Kira standing behind a dusty window. She has made a patch of condensation on the surface and is using her finger to write in it.