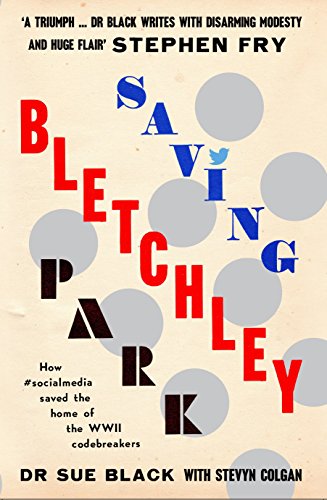 Ssssh! The girls are working Well, that’s only the half of it. A lot of us are probably aware that women’s contribution to technology throughout history is often downplayed and overlooked. The crucial role of Ada Lovelace in developing an algorithm to be carried out by Charles Babbage’s Analytical Engine has only recently been recognised, earning her the status as the world’s first computer programmer. No wonder the thousands of women who worked at Bletchley Park as both codebreakers and machine operatives are missing from the picture.

Although the focus of Saving Bletchley Park by Dr Sue Black and Stevyn Colgan is on Black’s hugely successful campaign to garner much-needed funding to restore the site and preserve its heritage, the book does a great job of weaving in the largely forgotten work of these women. We learn that the legendary Dilly Knox, a top cryptographer at Bletchley Park, was supported by a team of four brilliant women. These were Mavis Batey and Margaret Rock – who together cracked the Abwehr Enigma cipher, putting the Allies one step ahead of the German spy network in Britain and allowing misinformation to be fed back to Hitler – Ruth Briggs and Joan Clarke. Joan become Deputy Head of Knox’s team and was one of only a few women at Bletchley to hold a management position.

It’s fantastic to read about the level of respect that most people on the site had for this “elite maths team”. There is an account from one woman who, as a child, lived in the stables area next door to where the team were based. Her mother would regularly be heard to hiss “Ssssh! The girls are working” as an admonishment.

However, despite their immense skill, many loved to remark on Dilly’s selection of young, attractive girls to work with him, even though he actually hired the women purely on the basis of their CVs and didn’t meet them until their first day at Bletchley. That didn’t stop them being referred to as “Dilly’s Fillies” – even in Whitehall. It might seem like good ol’ fashioned sexism, if it weren’t for the more recent “Blair’s Babes” and “Cameron’s Cuties”. Talented and successful women are still being defined by the men they work with and what they look like.

Happily, Saving Bletchley Park doesn’t share the fascination of other history books with the exceptional above all else. Yes, we learn about extraordinary women, but the book is also packed full of the ordinary. There are lots of anecdotes from women veterans employed to drive vans or sit in sweltering rooms for hours turning the rotors on the precious Bombe machines. There’s a strong whiff of the Carry On about these, as vicars’ bicycles are stolen to get to the village ‘hop’ and RAF officers get in trouble for flying low to glimpse Wrens sunbathing topless. In an era when a lot of women were repressed, politically and sexually, it’s heartening to read about the varied and demanding work they were performing, but also about their spirit and sense of fun.

A clear image comes through of Bletchley Park as a real melting pot of different people coming together to achieve great things. Upper-class ‘debs’ rubbed shoulders with working-class men and women, gay naval officers and professors (some more open about this than others at a time when ‘homosexuality’ was still illegal). As ex-Google CEO, Megan Smith says in the foreword:

What mattered was what a person could do – not their gender, sexual orientation, religion, national origin, or any other difference or supposed eccentricity … And that is really juxtaposed by the Nazis who decided they needed to get rid of diversity.

Chapters emphasising Bletchley Park’s significance as an historical landmark and technological milestone written by Stevyn Colgan (it was the birthplace of Colossus, the first programmable computer) are interspersed with others about Sue Black’s social media campaign to save the site from closure. They often draw clever parallels – a chapter on Churchill’s visit to Bletchley and the effect this had on government funding for the codebreaking work is followed by one on Stephen Fry’s trip to the site and how this helped secure media interest in restoring it. The impact of a celebrity endorsement has come to Bletchley Park’s rescue more than once.

Those chapters dedicated to the prolonged campaign to save Bletchley are an honest account of the number of people involved and the amount of work needed to make things happen. On reading them it becomes very difficult to understand why such an importance place – that many believe shortened the war by two years and saved 22 million lives – was being left to rot. Although the campaign started with petitions and letters to newspapers, it was only when Black discovered the power of social media to make instant connections with like-minded individuals and powerful advocates, and to share blogs and events with thousands of people, that it really took off. These chapters also act as a sort of history of Twitter as, through Black (an early adopter), we see how its purpose and usage evolved, and what an empowering tool it can be. The campaign has often been cited as an example of how to use social media in online marketing and audience engagement.

There’s also something very personal about these sections, charting Black’s journey from an introverted and lonely computer scientist who left school at 16 and had a spell in a women’s refuge, to a confident and savvy communicator and social entrepreneur. It’s clear she needed Bletchley Park as much as it needed her. She talks about her nervousness, but determination, in approaching Megan Smith at a networking event to ask for $100,000 from Google for the campaign. How fitting that one of the 1% of women tech company CEOs was able to make such a big contribution to the preservation of women’s history.

Saving Bletchley Park is as much about Black’s enduring love affair with Twitter as it is about the site and its history. Early on, she says “Twitter … was becoming my lifeblood – my main source of information, humour and friendship.” Unfortunately, if you aren’t quite as passionate about social media, some chapters can be overly detailed as Black chronicles every aspect of the campaign. Her enthusiasm for meeting new people and making connections is infectious, but perhaps a more succinct account of the key turning points of the campaign would have given these sections a clearer focus. There is also some repetition as we often read about her discovery of interesting Bletchley facts before or after they crop up in the historical chapters.

Having said that, Saving Bletchley Park is an Amazon bestseller and was the fastest crowdfunded book ever back in 2014 – and with good reason. Even if you know nothing about Bletchley before you pick up the book, you will quickly become fascinated by the stories of the people who worked there and deeply grateful to the author for her tireless work in ensuring that these were not lost forever. Each campaign-related chapter contains links to blogs, articles, videos and interesting websites, which then link off to more of the same. It’s easy to find yourself on a codebreaking odyssey from which there’s no going back.

Overall, this is a long overdue account of some of the vital work done by the 10,000 people based at Bletchley Park during the Second World War – more than half of who were women. The variety of tasks they performed is an inspiration to us all, not just to women in tech, and it is so important that these stories have been written back into history.

Several thousand women operating computers helped to win the war, and a woman sat behind a computer helped to ensure no one forgets it.

Saving Bletchley Park by Dr Sue Black and Stevyn Colgan is published by Unbound and is available for purchase HERE.

The image is the cover of the book and was found on Goodreads. The title ‘Saving Bletchley Park’ appears diagonally across the cover in a variety of fonts and colours. The dot of the ‘i’ in ‘Saving’ is the blue Twitter bird logo. The author’s name, Dr Sue Black, appears along the bottom of the cover, along with a co-author, Stevyn Colgan. There is a sub-title that appears alongside the main title: ‘How #socialmedia saved the home of the WWII codebreakers’. There is also a quote from Stephen Fry which appears along the top: “A triumph … Dr Black writes with disarming honesty and huge flair.”