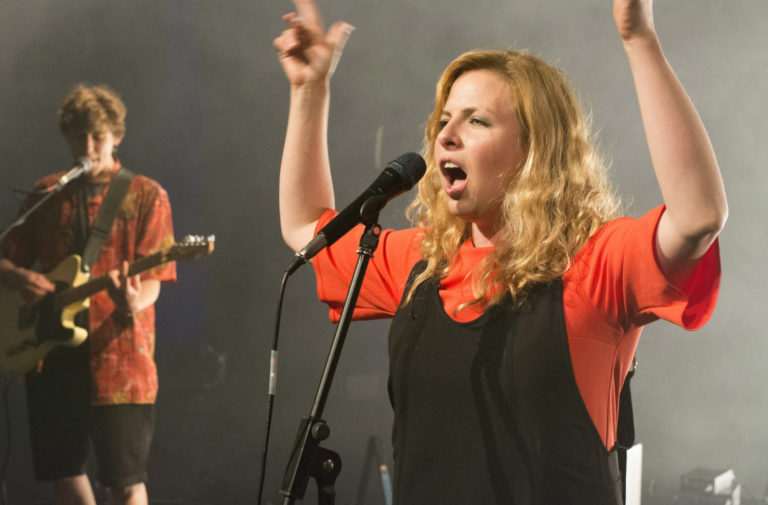 From 11 to 13 October, Camden People’s Theatre will be showing Tanja from Strawberry Blonde Curls. Tanja has been on tour around the UK and will be at the Arc in Stockton on 20 October. The play is about “another asylum seeker now held at Yarl’s Wood Immigration Removal Centre; Britain’s best kept secret. With immigration issues reaching fever pitch, this is the story of one woman’s bravery in the midst of prejudice and abuse.”

Neither victims nor villains but everything in between, See Me Now challenges the stereotypes and stigma around sex workers

At Hackney Showroom from 19 to 22 October there is Starting Out; five plays which explore the human stories behind issues of zero hours contracts, lone working, glass ceilings, internships, female unemployment and examine what it is that give some women a better start than others.

In Edinburgh Blow Off by Julia Taudevin will be at the Traverse Theatre, Edinburgh 12 – 13 October (as part of the Dario Fo Festival) and Paisley (The Spree) on 22 October. This is described as explosive new guerilla-gig-theatre exploring the psychology of extremism with haunting melodies and progressive punk riffs. Looking further ahead See Me Now, a collaboration between Young Vic, Look Left Look Right and HighTide, shares the true stories of sex workers. Neither victims nor villains but everything in between, See Me Now challenges the stereotypes and stigma around sex workers and celebrates the group of performers who share their stories on stage. See Me Now will be at the Young Vic from 11 February to Saturday 4 March 2017. There will be an audio described performance on Saturday 4 March at 2.45pm and a captioned performance on Tuesday 2 March at 7.45pm.

Within the world of live art, Walking:Holding invites you to walk hand in hand with a series of different local strangers around nearby streets, parks and alleyways. It is a participatory performance for one audience member at a time, offering a gentle meditation on identity, touch and intimacy in urban public space. It will next be performed in Leeds on 11 and 12 November. Check out the Compass Festival website for details of how to participate. Walking:Holding is access friendly; it accommodates wheelchair users and has in the past included people with disabilities.

From 20 to 30 October in Manchester is the Women in Comedy Festival in its fourth iteration. There are a huge number of female comedians taking part and a new comedy writing competition. If you’re planning to attend any of the events please let me know how you found it (and if you’d like to write a review for The F-Word even better!)

Four Femmes on the Thames are performing their original musical comedy at the Hen & Chickens Theatre in London on Friday 14 October, Friday 28 October, Friday 11 November and Friday 25 November. The Femmes will perform an hour long set of original Musical Comedy featuring hits such as ‘Woman Up’ named the “sweary feminist anthem of the year“.

Finally I’ve been sent this video called Slutwalk: The Musical. The makers are Kiwi intersectional feminists, it’s subtitled and it made me smile. Enjoy!
CN: one mention of disabilist language early on, discussion of rape and rape culture throughout.

Image 1 (the feature image) is of Julia Taudevin in Blow Off, taken by Niall Walker. The majority of the photograph is taken up by the head and torso of Taudevin. She is singing or chanting into a microphone with her arms held up beside her head. She wears a red t-shirt underneath a black dress. Behind and to the left of her is a man playing a guitar wearing a patterned red shirt and black shorts.

Image 2 is from Rosana Cade’ Walking:Holding. It shows two figures walking away down the street holding hands. There are lots of bright colours: the garages that the figures walk beside are painted yellow, blue and red and the walkers are wearing coloured clothing, one in a purple raincoat and one in a green raincoat with patterned trousers and wellingtons. There is a large puddle at the bottom left of the photograph which reflects the walkers and garages.

Video is from Flat3 Productions. It begins with a group of women meeting at night in order to go on a walk to raise awareness of rape culture. They cross paths with a group of men who are out on a stag night and the two groups end up singing and dancing to a musical-style number.