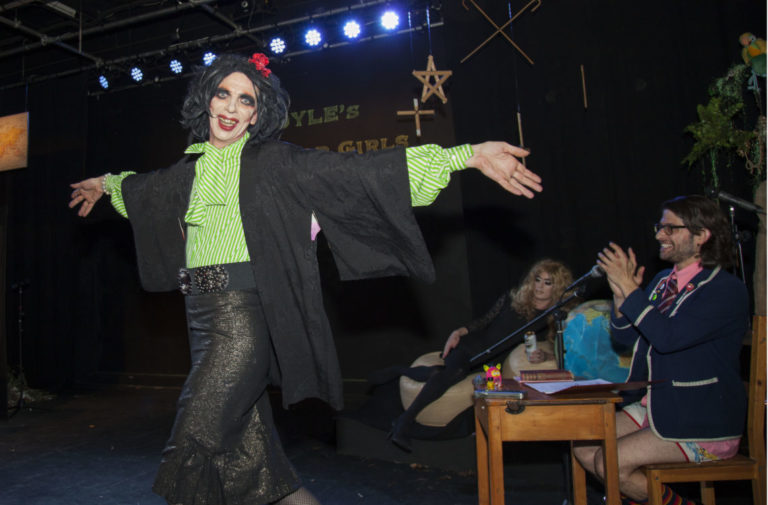 It’s entirely fitting that I’ve lost the notes I scribbled while watching The Prime of Ms David Hoyle at Chelsea Theatre last month. Set in Ms Hoyle’s Academy for Girls (with the word ‘girls’ scrawled out and replaced with ‘all’ in the sign on stage), the show is an undisciplined anti-education celebration that radicalises society’s rules for life and learning. I have a feeling that taking notes is not part of Ms. Hoyle’s lesson plan.

David Hoyle is a legendary performance artist who first came to prominence in the 1990s as “anti-drag queen” The Divine David. The Prime of Ms David Hoyle is hosted by him in dramatic makeup, sparkly outfits, wigs and high heels and peppered with his trademark, eviscerating social commentary. But this show is also a vehicle for a more mellow stage persona (Hoyle retired The Divine David, in any case, a decade ago); in between rants about the military-industrial complex, Ms Hoyle urges all of us to love each other and ourselves.

“Ladies and Gentlemen,” says Hoyle, “and those of you clever enough to have transcended gender […]” The genius of this is bittersweet: it suggests that gender can be overcome and prompts you to remember the world is not (yet) that free. Likewise, The Prime of Ms David Hoyle teeters between idealism and pessimism, lambasting the liberal assumptions of its audience as well as the patriarchal framework of the wider world.

While his stage persona rips right through gender norms, the entire show hinges on making the mainstream strange

The show opens with a rousing orchestral number. “That,” says Hoyle, after he has made his entrance, “was, of course, the national anthem of North Korea.” Is he mocking his leftie audience for our socialist ideals? Is he mocking the mainstream tendency to link progressive politics to dangerous communism? Or is he likening the UK’s education system to a dictatorial regime, in which everyone is required to toe the line?

The answer, I think, is all three – an impossible position, of course, unless you believe that people can be imaginative and rational at the same time. And that is exactly what Ms Hoyle is saying. In fact, impossible, imaginative and rational are three defining characteristics of the evening, held in balance not just by Hoyle but also the people he shares the stage with in this cabaret-style show. Ben Walters is the Perfect Prefect Ben, dressed in a schoolboy’s outfit of shorts, blazer and cap, who keeps Hoyle to time with an innocent smile (Walters is also the show’s director and producer). Thom Shaw is Simone Simone, a bored and dazed hanger-on (“she came as a job-lot when I bought the school,” says Ms Hoyle), wafting listlessly around the stage like an extra at Andy Warhol’s Factory.

Each evening there are two special guests. On the night I visit the guests are Britannia (Eve Fehilly) and The Phoenix (Rhys Hollis). Britannia sings a desperate love song to the EU, a cathartic anthem for Remain voters that offers a sop to our despair and mocks our neediness at the same time. The Phoenix, a drag-rapper who commands the stage with all the beauty and lyricism of a reincarnated Prince, spits about politics, depression and desire from his costume of knee-high boots, makeup and a string vest. As for Hoyle, the impossible-possibility of occupying more than one identity at the same time is what makes his performances fizz. While his stage persona rips right through gender norms, the entire show hinges on making the mainstream strange. During the first half, Hoyle reads Shelley’s 1819 poem ‘The Masque of Anarchy’ to the deafening sound of low-flying fighter jets. By the end of the last verse, Hoyle is screaming into the noise, his body bent double, his face contorted with the effort. This is revolutionary Romanticism; a far cry from the insipid version that leaked through my school curriculum. Half-remembered words from my childhood mix with the half-familiar sounds of war from the TV news. The poem has become a weapon that electrifies the room.

Shelley, Hoyle says, was a “beautiful” person, a description that sounds tragically delicate when juxtaposed with those killing machines. And yet the word hangs in the air, floating alongside the memory of the aeroplanes’ terrifying sound, scratching away at their horrible logic. Exploding the mainstream meanings of mainstream culture in this way, The Prime of Ms David Hoyle sticks two painted fingers up at the patriarchal control that underpins all social norms. At one point Hoyle impersonates “one of those creatures that calls themselves a man.” It is the most subversive part of the whole show. Despite an almost all-male cast, the sudden spectre of a masculine stereotype feels like a real threat to this place of freedom and excess.

In recent years, drag performance has been questioned by some people within the LGBTQ+ community but this anti-drag queen is a reminder of its power. The reason the ‘anti-drag’ moniker has stuck (it was, in fact, coined by Walters, writing about Hoyle years before they began working together) is because it conjures the gender-criticism of drag and then squirts a hot sauce of more gender-criticism, excessively, all over the top.

What emerges over the course of The Prime of Ms David Hoyle is a new model for authority, which not only rejects the Victorian moralism that Hoyle recounts from his childhood, but also develops something more participatory and hopeful. “Solidarity in the face of the philistine,” says M. Hoyle and at the same time Prefect Ben unveils those words written on a flipchart at one side of the stage. This is a quote from The Prime of Miss Jean Brodie (Muriel Spark’s novel, which provides the basis for the title of this show), and its appearance anchors the chaos and disorder of the evening. Hoyle’s apparently unrehearsed monologues are in fact part of a carefully considered philosophy of opposition, albeit one based on a novel about a woman’s ambivalent success. The words are all the more poignant because they are written, carefully, by hand: unlike fighter jets, this opposition is personal, it’s messy, it’s intimate.

The conceit of the school setting, says Walters (over email): “allows us to put David in a different kind of high-status position: as teacher he is not only leading the encounter but also explicitly in a position of care over everyone else.” The result is a kind of double vision: the show resonates with the spirit of an oppressive, cruel world beyond its borders, but brings kindness and warmth to the collective gathered together in the room.

It’s not a spoiler to tell you that the show ends with an audience sing-along to the pop song ‘I Can See Clearly Now.’ After an evening of excess that finds clarity in complexity, and vice versa, the words feel hopeful and elusive at the same time. We sing loudly, without irony, like a fragile choir breathing hope into the night.

Both images are courtesy of David Hoyle and were taken by Holly Revell.

Image 1 shows David Hoyle as Ms Hoyle walking across the stage with his arms outstretched. He has black hair in a bob with a pink flower in it. He is wearing a green and white striped blouse with a black skirt and a black academic gown. He has white make-up on his face with heavy black eye make-up and red lipstick. He looks euphorically straight at the camera. On the right of the photograph Ben Walters as the Perfect Prefect Ben sits at a wooden school desk and right at the back of the stage Thom Shaw as Simone Simone lounges on leather pouffes.

Image 2 has Ms Hoyle to the right of the photograph. He is holding a microphone, looking up and shouting intensely. He is wearing an assortment of clothing including an embroidered waistcoat, a short-sleeved brown draped jacket and lots of jewellery. He has white make-up on his face and lots of dark eye makeup. On the wall behind him to the left of the photograph are a number of post-it notes, a scribbled drawing of a face and some flowers. There is a lectern just to the left of the shot.