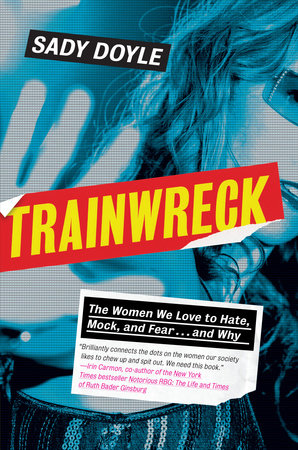 Women on the wrong track? Leaked sex tapes. Drug overdoses. Troubled relationships. Public meltdowns. The female ‘trainwreck’ has always had a prominent place in the media spotlight – women behaving badly sells, whether we love them or love to hate them. In Trainwreck: The Women We Love to Hate, Mock, and Fear, and Why, Sady Doyle presents a thorough examination of this fascinating stereotype, tackling a wide range of topics such as sex, politics, perceived ‘madness’ and death. Dividing her account into three sections, ‘Her Crimes’, ‘Her Options’ and ‘Her Role’, she analyses a number of historical trainwreck figures, gives contemporary examples and, most importantly, attempts to understand the complex relationship between ‘wrecked’ famous women and their ‘ordinary’ female spectators.

Doyle begins by defining who a ‘trainwreck’ is and what she must do in order to be labelled as such. She argues that a woman cannot make “common mistakes” and be considered a trainwreck; instead she must fall spectacularly whilst in the public eye. Yet her gender is a significant factor in the response to her behaviour – something that Doyle is quick to examine. She highlights the inherent sexism of trainwreck culture, comparing so-called “crazy bitch” Courtney Love and “badass” Keith Richards in order to illustrate her point. She revisits this idea in a later chapter on mental illness, noting the similarities between Lou Reed and Valerie Solanas: “Mental illness and addiction ruin women … but they seem to add to a man’s mystique.” Comparisons such as these are common throughout Doyle’s work beyond this book and prompt the reader to question the problematic stereotyping of the women who are typically considered to fall into the category of trainwreck.

Another key point Doyle raises early on is that all women have a central role in the criticism of ‘badly-behaved’ women. She proposes that trainwreck celebrities are seen as examples of how not to behave, and determines that the rejection of women viewed in this way is therefore often perpetrated by other women. This is evident in her case study of Mary Wollstonecraft, in which she attributes the female backlash against Wollstonecraft in the late 1800s to the belief, at the time, that feminism was for “women who behaved correctly and had their shit together”. Doyle perceptively relates this case to the present day, discussing women’s criticism on social media towards Beyoncé’s self-identification as a feminist.

While various issues are touched upon in Trainwreck, Doyle’s analysis of women’s sexuality is perhaps the most thought-provoking topic. Suggesting that a woman’s public sexual behaviour is often viewed as the first sign of her becoming a trainwreck, Doyle discusses media interest in the sex lives and bodies of female celebrities, engaging her audience by using pop culture examples such as Miley Cyrus and Nicki Minaj. She also explores depictions of Hillary Clinton as unattractive and “sexless” in comparison to “blow-job queen” Monica Lewinsky, maintaining that neither woman is considered acceptable and that this is as a result of their apparent trainwreck qualities. The focus on Clinton is particularly relevant at the time of the book’s publication, giving it a current and topical feel.

Through carefully disguised misogyny, the trainwreck trope is used to set an example to women of how not to behave

So what does the trainwreck story teach ‘ordinary’, non-celebrity women? Doyle believes that not only are we unable to look away from the spectacle, but that “when women look hard enough at the trainwreck, we almost invariably end up looking at ourselves”. Through carefully disguised misogyny, the trainwreck trope is used to set an example to women of how not to behave. Sexual urges, hysteria and drug addiction are all seen as unforgivable weaknesses. According to Doyle, the trainwreck ‘industry’ creates female villains whose only hope of redemption is through death. She further emphasises this idea with a quote from Cathy Levine encapsulating the stereotype: “In the absence of feminist activity, women take tranquilizers, go insane, and commit suicide.”

Towards the end of Trainwreck, Doyle refers to her work as a “book of female confessions” and admits that she herself does not feel like a “strong feminist woman”. This reflective approach can be found throughout, with Doyle questioning her own beliefs and experiences and pushing her readers to do the same. Her conversational tone makes Trainwreck accessible and engaging, while her references to current celebrities are extremely important and relevant. She evaluates social media as a tool for women to talk, not only about other women’s lives but also their own, and views this as a way for us to convey our personal stories in our own words and on our own terms.

One major weakness of the book is that, while the number of women covered in each chapter is admirable, Doyle sometimes fails to delve entirely into what are considered to be the trainwreck qualities of each individual. For example, Courtney Love is mentioned only a few times in passing, yet she could easily be described as a classic ‘trainwreck’ case study. However, this is likely a result of Doyle’s position as one of the the first authors to cover this particular concept in detail. It does not, in my view, detract from the significance of her work. Overall, Doyle’s writing is essential reading for anyone seeking to understand the backlash against ‘badly behaved’ women and is a compelling and memorable piece of cultural critique. As Doyle herself writes, “The trainwreck might turn out to be the most potent and perennial feminist icon of them all.”

Trainwreck: The Women We Love to Hate, Mock, and Fear, and Why by Sady Doyle is published by Melville House Publishing and is available to purchase HERE.

The image used is the cover of the book and was found on Goodreads. It appears to style itself on a ‘tabloid splash’ with ‘headlines’ and block capitals. The title ‘Trainwreck’ appears centre, in a red text box. Behind it is part of somebody’s face. The person has long hair, is wearing sunglasses and is holding their hand up as if shielding themselves from the camera. The image is blue-tinted and appears as if it has been shot through a long-lens camera, as often used by the paparazzi when photographing celebrities.