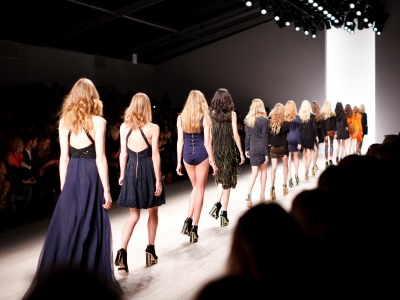 Is a model-free edition of Vogue simply window dressing? Let me confess: I love fashion magazines. I love beautiful clothes, pretentious clothes and ridiculous clothes. However, I have no time for the fixation that fashion magazines have with very thin models. The discussion has taken place many times and even models have spoken up about the damaging ways the fashion industry places expectations on the female body. Unrealistic body images in the media can perpetuate body dysmorphic disorder, eating disorders and low self-esteem. Yet, for some reason, the fixation with thinness continues.

So when it was announced that The Real Issue, British Vogue’s November issue would not feature any professional models in its fashion shoots my interest was piqued. Alexandra Shulman, who has been at the helm since the early 90s has been vocal about this decision; she expresses her desire that fashion be accessible to everyone and the difficulty in finding designer samples that could fit the frame of a someone who isn’t a model.

This is not entirely surprising. In 2009 Shulman wrote to major fashion houses complaining that the too-small sample sizes were forcing editorials to hire models with “jutting bones” and “no breasts or hips.”

If designer samples won’t fit the ‘larger’ models then what are the chances they will fit you and I? Slim to none, frankly. So at face value this idea of a model-free Vogue seems brilliant; almost radical. I found myself convinced it was a positive step towards promoting the true diversity of women’s bodies. Real bodies. But I realised I was making an assumption of how Vogue would define real. I was assuming that real meant a mix of short women, plus size women and women of colour. Then I found myself wondering: does this mean that models somehow aren’t real?

Once I looked through the issue I realised it was not as transgressive as I had hoped. Emily Blunt looks radiant on the cover but admits it took over three hours to make her camera-ready. I can’t help but notice that Blunt (who for the record I think is awesome) seems to be a US 4 which would make her a UK 8. While that isn’t teeny tiny it’s a far cry from the average size of a British woman which is supposedly a size 14. Blunt may not be a professional model but she has been the face of YSL’s Opium and a cover girl for more than a dozen magazines including Harper’s Bazaar and Esquire. In short, Blunt gracing the cover of The Real Issue doesn’t quite set the tone of a magazine celebrating ‘just like you and me’ women.

Inside isn’t much different. The magazine is littered with adverts for designer products and these images are full of models. Magazines rely on these ads to survive so you literally have to flick through pages and pages before you reach a real editorial section. While none of the fashion from the designer shoots may have been worn by models, the designers involved nominated the women who would wear their clothes. This isn’t quite the same as using women who happen to walk past the office at lunch.

They chose women who seemed creative, intelligent and unique, who were all rather striking with slender frames, which is perhaps not surprising given the problem with designer samples. This seems hollow and suggests Vogue are just trying to pay lip service to the idea of being truly progressive. As plus-size blogger Bethany Rutter notes, “Any kind of special edition, or short-term tick box exercise ends up maybe being worse.” It feels like a token project that lets fashion magazines say “We did it, now leave us alone”. The status quo remains unchallenged.

So was it disingenuous for Vogue to proclaim the issue a model-free zone, even if only because of the heavy presence of sponsored adverts? The truth is that this was always going to be a mammoth task for Shulman’s team. Fashion magazines are bound by the grip of designer houses and it can be almost impossible to break free.

Shulman took a risk for which she should be commended. Another editor walked this path before and it didn’t end well. Lest we forget that Liz Jones was effectively sacked from Marie Claire because she was unwilling to keep using bulimic models in the magazine and spoke up about it, much to the chagrin of the industry. Shulman is one of few voices who is speaking up against the nature of fashion sizing and she should be applauded for staying true to her principles. The problem is that until the majority of editors and designers start to trumpet her cause it will be difficult for her to break ground.