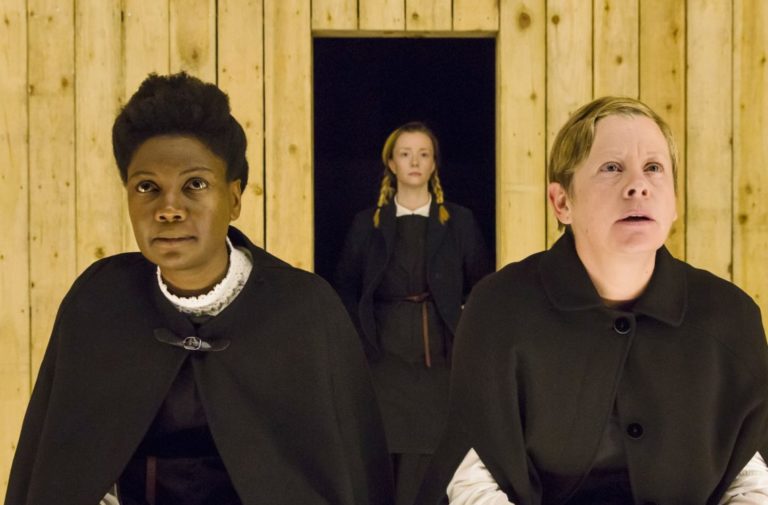 The Sewing Group opens with two women, A and B, dressed in plain, sombre clothing, crouched low on wooden stalls next to a candle, sewing samplers. They work in silence, with the sound of wind whistling outside the wooden room in which they sit. The scene gives the impression of a rural place, some time ago; perhaps pre-industrial England, perhaps the early colonial days of the USA.

In the next moment a new woman, C, is introduced to them. A man, F, says: “She’s come from the next village. To live with her aunt and uncle” and then leaves. Over a series of short scenes, punctuated by birdsong and the sound of a harpsichord, the three women make slow, stilted conversation, but a friendly relationship is gradually building up between them.

However none of them are able to sew very well (I can tell by how people move their hands, I’m a good sewer) and no one is using a thimble. Some of the sentences they use also seem off, full of seeming non-sequiturs and modern day phrases like “task orientated” and “OK”. Of course, all is not quite as it seems and the play turns out not to be about a sewing group at all, but about the wish for a simpler life and whether or not that can be obtained. “Sewing is an exercise in self-development” says B, but it may not be working here. The new arrival, C, is soon changing the colour of the thread they are using, suggesting new stitches and encouraging the villagers to each create a quilt that truly represents them from which she believes she can learn new things about them. Her instructions cause confusion and unrest and soon no one is quite sure what they are meant to be doing.

Stewart Laing’s direction seems overly static to begin with, but there are some superb visual moments later on and the design, also by Laing, is really cleverly done and well used. Mike Brookes as lighting designer creates several different lighting states, which adds interest to what could otherwise be mostly quite simple staging. The sound design by Christopher Shutt is also excellent, as well as the wind, birdsong and harpsichord many other sounds are used to create surprising effects for the audience.

E. V. Crowe’s play doesn’t outstay its welcome at only 1 hour and 20 minutes, but as an audience we spend a little longer than is strictly necessary trying to piece together what is going on before all is revealed

The cast do incredibly well delivering the strange lines and keeping their intentions and relationships clear. Fiona Glascott captures the character of C/Maggie perfectly, both in intonation and in her body language. She is something of a caricature, but one that I recognise both in me and in many people I know.

A, Jane Hazlegrove and B, Sarah Niles, do well to stick with their complicated characters throughout, and Hazlegrove in particular is very funny. John Mackay as F/Mac also has a hill to climb to deliver his lines in a way that makes sense, which he manages. Alison O’Donnell as D/Sally is very good, she commits to her role in a way that’s unshowy and realistic. Nancy Crane as E is not used so much, but what she does is all done well.

E. V. Crowe’s play doesn’t outstay its welcome at only 1 hour and 20 minutes, but as an audience we spend a little longer than is strictly necessary trying to piece together what is going on before all is revealed — this does, however, give the opportunity for a few early laughs. Crowe has a nice turn of phrase, although much of the language is very strange indeed, the lines seem beautifully sparse and fit together well.

It’s a shame then that all this good work is going into a play which seems, overall, quite thin to me. There just aren’t that many ideas in The Sewing Group. It’s one idea, done really well, and although it might be a multi-faceted idea that’s contemporary and relevant, it’s still only one idea. I don’t feel I’ll be thinking about The Sewing Group very long into the future. There’s more to be said about the complication or simplicity of life and what that means to us as humans than is shown here.

To finish, I have something of a confession. When the Royal Court sent through the press release for The Sewing Group I saw that the majority of the cast were women and that it featured sewing and I assumed therefore that it would be about ‘women’s issues’ in some way, and it isn’t, not really. Of course there’s a feminist take on nearly everything, and I could write about how sewing has historically been a refuge and an outlet for women who were denied other power, but that isn’t in the end what The Sewing Group is about, and for that I’m pleased.

The Sewing Group just so happens to be a story that’s best delivered by five women and one man, and that in itself is a feminist act.

Image is courtesy of the Royal Court and is by Stephen Cummiskey. It shows Sarah Niles as B and Jane Hazlegrove as A sitting down at the front of the photograph, while Fiona Glascott as C comes through a door behind them. All three are wearing black sombre clothing and the room they are in is pannelled in planks of untreated wood. Niles and Hazlegrove hold samplers in their laps, on Hazelgrove’s sampler some red stitching can be seen.