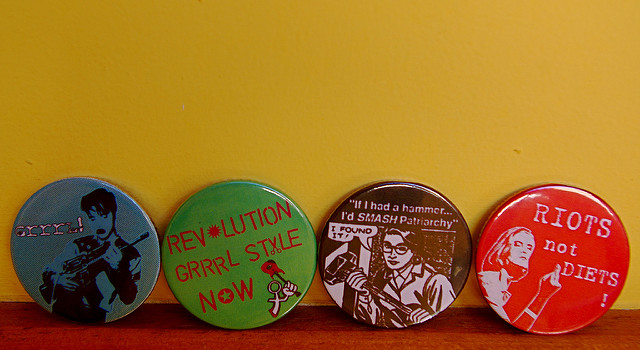 Welcome to another weekly round-up, where we share (what we see as) the most interesting and important articles from the previous seven days. We’d love to hear your thoughts on any of the issues covered in our chosen links.
As always, linking to articles does not mean endorsement from the F-Word and certain links may be triggering. We welcome debate in the comments section and on Facebook/Twitter but remind readers that any comments containing sexist, racist, homophobic, transphobic or disablist language will be deleted immediately.

Dear Hillary, You Betrayed Me, But I Admire You (The Establishment)

I assess if you are fit for work. I hate having to score your life this way (The Guardian)

From the article: “My parents deserved better from their peers. The only solace I can offer them is my love, my gratitude, my solidarity, my immeasurable pride in them and a solemn promise to fight on. Part of that fight is accepting what the working classes really are – often liberal, justice-loving people whose values set the foundation of the Labour movement which so many middle-class people have now joined.”

An 87-year-old Japanese grandmother is taking the best selfies in the world (A.V. Club)

Stay Out of Fat Girls’ DMs (The Urban Twists)

Against proposals (Another Angry Woman)

From the article: “Getting married is a major life decision, and yet it is the only major life decision I can think of which involves a bizarre ritual in making the decision. We do not buy a ring while figuring out whether to go to university or not. We do not book a fancy restaurant to have a think about buying a house. We do not get down on one knee when deciding if we want to have children. We do not put a cute little question in a fortune cookie when working through the various treatment options for an illness.”

Domestic abuse could not be further from gender neutral. Wake up Britain (Telegraph)

From the article: “These aren’t the times for self-loathing liberals to seek to understand the leaders of the global far right, or their supporters. That ship sailed when Trump put Breitbart into the White House. We should be in crisis-management mode. It’s time to reassert a fundamental principle, namely that there’s no excuse for bigotry, whichever alt-right buzzword you get Boris or Steve Bannon to rebrand it with.”

The image is used under a creative commons license with thanks to gaelex on Flickr. It shows four circular objects (possibly badges) side by side against a yellow background, each featuring a different feminist slogan: “Grrrl!”, “Revolution Grrrl Style Now”, “If I had a hammer … I’d smash the patriarchy” and “Riots not Diets”.