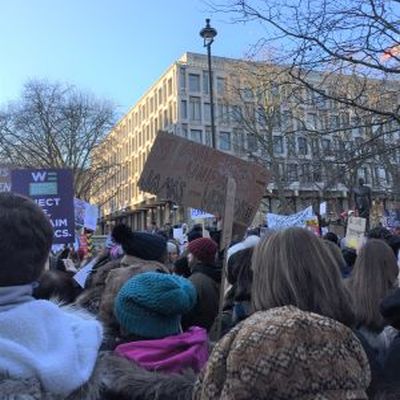 Turn this moment into your own movement Music, singing, dancing, shouting and a sense of community permeated the Women’s March in London. It almost felt and sounded like a festival. But the party atmosphere was also clearly underscored by a shared and deep-felt anger. The volume and diversity of issues at stake in this new world order were on show everywhere you looked. Signs, banners and placards cried out for reproductive rights, safe havens for immigrants, an end to fake news and media bias, support of vulnerable groups, control of women’s bodies and freedom of choice. Some of these are new; others we thought had been ticked off the feminist ‘to do’ list years ago.

This was my first protest and I’m not ashamed to admit that the weight of these issues, and the sense of solidarity to tackle them, set off an emotional response. My mum was at my side and we talked about how she and her friends feel deeply frustrated and saddened at the erosion of progress they’d seen over the past 50 years. We talked about why people of privilege and power continue to fear equality. We admired the creativity of those who had crafted humorous, meaningful and thoughtful placards to demonstrate their personal response to Trump and his allies. We absorbed the scale and peace of the event and felt proud to be standing with so many who got off their sofas to fight for each other’s rights.

The crowd far exceeded the numbers that anyone had anticipated. But we must remember that the number of people who didn’t march is even greater. There are so, so many who don’t understand the purpose of yesterday. On social media we can easily find those who declare that feminism is emasculating men, or that women already have ‘enough’ rights. During the march, a young woman angrily passed through the crowd, trying to continue her shopping, and some of us laughed at her expression of disgust at the protestors blocking her way. We can dismiss her and the vitriol of those online as naïve or wilfully ignorant. But we ignore it at our peril. The last few years have taught us the dangers of sitting comfortably in our echo chambers. The US election shows us what happens when we dismiss the power of others who won’t see what we see, and don’t believe what we believe. We must never again be complacent.

We must also remember that this wasn’t just a protest against a single man – odious as he may be – but against a worldview that allowed him into high office. It wasn’t an attempt to solve or resolve problems, but it showed our strength, our voice and our resilience. It loudly proclaimed that we will not be intimidated, we will not be misled by rhetoric that attacks the vulnerable. We will not shrink away.

So, what next? Take comfort from the diversity, scale and energy of the crowds pouring through the city streets. But do not rest. Take heart from the solidarity we witnessed. But do not sit back. Look for a way to make a difference in your communities – local, national and global. Find a cause that ignites you and lend it your skills, talents and energy. Discover organisations that need support and volunteer your time to them. Talk calmly with those who question the motives of marchers and remain graceful in the face of confrontation. Make an effort to better understand the global and local problems we face. Discover how small changes in your everyday behaviours can impact social, ecological and political justice. Challenge the tone of misogyny and discrimination every time you see it. Continue to be brave and outspoken. Remember this day and all those who stood alongside you. Never again feel that you are just one person unable to enact change.

This must be the beginning of a recognition that we will not move forward without direct involvement and conscious action. Each and every one of us now needs to pledge our own contribution. We owe it to the feminists who went before us, the feminists we stand alongside, and the feminists who will follow in our footsteps.

In the first hour of the London march, we made slow progress. The tiny streets of West London couldn’t accommodate the sheer size of our movement. We’d inch forwards, then stop again. For me, this is a symbol of the blockades we face on all sides and that can hold us back. But with patience, perseverance, determination, and the support of those around us we surge onwards. We will reach our destination. And we sure will have some fun on the way.

Image is of a crowd of women at the Women’s March on London, some holding placards