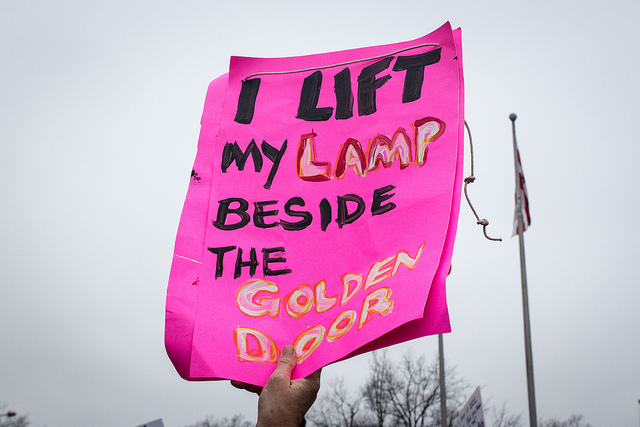 From the article: “The tabloids are crying “health tourism” over a woman who lost two babies when she went into labour prematurely mid-flight. When did we lose sight of all empathy?”

Gay people are still being locked up in Britain. What use is this pardon to them? (Huck)

From the article: “On Wednesday, Maryam Mirzakhani became the first woman in 78 years to be awarded the prestigious Fields Medal, considered the highest honor in mathematics. She was selected for ‘stunning advances in the theory of Riemann surfaces and their moduli spaces.'”

#DressLikeAWoman: Twitter backlash over reports of dress code for Trump staff (The Guardian)

From the article: “The claims that Trump expected his female staff members to wear stereotypically feminine attire drew ire on Twitter. Users responded with the hashtag #DressLikeAWoman.”

Your defense of immigrants is fucking colonialist (The Bridge to Texangeles)

From the article: “Yeah your great grandpa was 1/8 Hungarian or something, but unless Trump signed a ban on travelers from your country OR your family is here due to the U.S. bombing your country, please kindly stop appropriating the experiences of people who are actually suffering. ‘We are all immigrants’ is cute in theory, but it completely erases the role white supremacy plays in specifically targeting Latinx, South Asian, African, and Middle Eastern immigrants.”

Utopian thinking: how to build a truly feminist society (The Guardian)

From the article: “The truth of the matter is that privileged people have all of society as a safe space; our culture and even our laws are formed around their comfort. The most unequal laws of history have existed to protect the safe space of those in power  —  a space safe from abortions, from queer marriages, from black people and women voting, from anything that challenges their supremacy. Many of the people catered to by the entire setup of society are the same ones who would claim that life never gave them a ‘safe space.'”

People are asking how they can become a ‘professional anarchist’ (Indy100)

Article 50 Brexit vote: Full list of MPs who backed Theresa May starting official EU negotiations – and those who voted against (The Independent)

Everyday pricks distance themselves from Trump (The Daily Mash) [Satire]

From the article: “Tom Booker, who owns 400 buy-to-let properties and drives a Jaguar with a customised hood ornament, said: ‘I am a prick. I have a number of blinkered views and am generally hostile towards the underdog in any situation.

‘However Trump is taking prick behaviour too far, something I never thought was possible.'”

The image is used under a creative commons license with thanks to Liz Lemon on Flickr. It is a photograph from the DC Women’s March. It is an image of a hand holding up a bright pink sign which reads: “I lift my lamp beside the golden door” – a quotation from Emma Lazarus’s poem, ‘The New Colossus’.