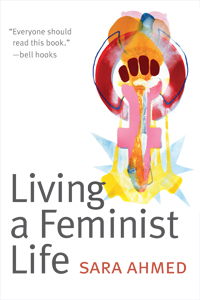 A new tool kit for living a feminist life The phrase ‘the personal is political’ has had a long legacy and many interpretations, but it’s what I think of the most when I engage with Sara Ahmed’s body of work. She starts most of her books with her own experience, but her approach is distinct from memoir or personal narrative because she goes a step further by analysing that experience as part of a larger social system which she then critiques. In the past, she’s written about the social meanings surrounding the idea of ‘stranger danger’ and linked it to a larger discussion on terrorism, along with reflecting on the implicit meanings behind everyday objects and how their presence informs how we structure our daily lives.

In Living a Feminist Life, she does more of the same – but I find myself engaging with it on a visceral level, more than with any of her other books (which include: The Promise of Happiness, Queer Phenomenology and The Cultural Politics of Emotions). Much of that has to do with the fact that this book could essentially be described as a ‘how-to’ instruction manual on embracing your inner “feminist killjoy”. Ahmed even provides a list of her books, along with everyday items like a writing desk and a list of “permission notes” and key figures that she keeps in her figurative “tool kit” as a way of demonstrating how every feminist can create a sense of peace and strength in their everyday world so they can tackle larger issues.

The goal of the book is to show someone who identifies as a feminist possible ways to lead a “feminist life” – but Ahmed manages to avoid being didactic. Instead, she encourages the reader to reflect on their own experiences and emotions, filling their own individual took kit with what they need the most. This led me to remember a personal story, which I think illustrates some of the book’s goals the best.

When I went home over Christmas break, my mother and I had a strong disagreement. This happens a lot – being a queer kid means expecting some kind of familial opposition over the holidays – but during this conversation, she did something that really annoyed me: she rolled her eyes as I talked.

I’ve always identified as a feminist, and carried out feminist work, but not until Living a Feminist Life have I seen this path expressed in such a clear and focused way

Not once, not twice, but several times during our disagreement. Each time I tried to open my mouth to say something, I was greeted with rolling eyes. It got to the point where I had to call her out on it, and it was the only point in the conversation where I lost my cool. Of course, raising my voice even a little bit only affirmed why my mother was rolling her eyes in the first place: I was creating a problem. She just wanted to have a conversation, but I was the one causing things to escalate. I left feeling frustrated, alone and confused. How could eye rolling – a simple gesture – carry with it so much pain?

Sara Ahmed understands the legacy of eye rolling. To her, it’s a lesson: when someone rolls their eyes, a ‘feminist killjoy’ has brought up a point that requires attention and more discussion. But by pointing out a problem, we become the problem, so in order to reset equilibrium, people need to dismiss the problem – and dismiss us as feminist killjoys as well. By experiencing the act of eye rolling, we’ve hit on something important and integral to the maintenance of power and status quo, something that is within our duty as feminists to point out.

But this stance also leads to pain. Ahmed writes:

When you speak of something as being wrong, you end up being in the wrong all over again. The sensation of being wronged can thus end up magnified: you feel wronged by being perceived as in the wrong just for pointing out something is wrong. It is frustrating!

Frustrating is an understatement! I don’t personally know a single feminist who is unfamiliar with the stinging sensation of being dismissed. Which is what leads Ahmed to write that “the sensations that lead us to feminism are often the very same sensations that follow being a feminist”. Being a feminist can often feel as if you’re on a loop, getting nowhere and not being taken seriously. Ahmed acknowledging this gives us an opportunity to recognise this loop – and by recognising it, perhaps we can start doing something about it.

In more ways than one, I’ve been preparing myself for living my version of ‘a feminist life’. I have a BAH in Women’s Studies and English Literature and my graduate career has involved studying and analysing transgender representation in all forms of media. But I’ve never been given such an effective language and structure, never such a complete ‘tool kit’, with which to embrace this kind of path. I’ve always identified as a feminist, and carried out feminist work, but not until Living a Feminist Life have I seen this path expressed in such a clear and focused way.

Ahmed’s writing stands out because she roots her analysis in everyday bodily gestures: eye rolling, brow lifts, flexed and extended arms. She also focuses on everyday structures, both physical (walls, doors) and institutional (citations, human resource departments). She’s always focused on the quotidian, along with talking about her personal struggles and experiences, but Living a Feminist Life seems to close up any distance which might have previously existed between Ahmed and her writing. Some of this might be to do with the fact that she’s now left her position at London Goldsmiths College to become an independent scholar. She still uses academic language, discusses academic institutions and uses an academic publisher (Duke University) with this work, but there is a new kind of embodied practice to her writing. Ahmed left Goldsmiths because of allegations that the college failed to address complaints about sexual assault/harassment – perfectly demonstrating that her feminist ideas are not just words, she’s actually living them.

After finishing this book, some of Ahmed’s ideas still come to me in waves

Being a feminist and practising feminism have become different things over the past few decades. Nothing embodies this fracture more than the controversy surrounding Taylor Swift and her tweet about the Women’s March, as Emily Yahr documents in The Washington Post. In Ahmed’s Living a Feminist Life, she takes her identification with the term feminist and combines it with a performance of that role. I don’t mean performance as in she fakes it; I mean performance as in daily practice. The distinction may seem small, but it means everyone can become a feminist if they practise at it, and keep practising at it.

After finishing this book, some of Ahmed’s ideas still come to me in waves. When I experience being stuck in a crowd, or hear someone snap their fingers, I think of Ahmed’s analysis of those occurrences. There are so many examples of meaningful everyday acts I can’t begin to touch on all of them, so I will focus on her reading of the arm.

Ahmed manages to take an already symbolically charged image of the flexed ‘feminist’ arm – think Rosie the Riveter – and expand its iconography. Ahmed ties in Sojourner Truth exposing her arms to white feminists to demonstrate that she was a woman, but also her strength from being a surviving slave. Ahmed links the arm to a German fable about a wilful child who refuses to put their arm down, even after they die. In Ahmed’s retelling of the fable, the child is a girl and the arm becomes an unruly object, pushing back against those who try to control it. The arm can be a feminist tool, but by outlining its use and effectiveness as a symbol over time, Ahmed made me look at my own arm differently. She helped to illuminate my own power, while also acknowledging it in others.

The image of the arm becomes a visual representation of the intellectual idea of intersectionality. As an icon, the arm becomes a tool that someone can possess as a way to take back control from those who have caused oppression; it can be used to point fingers at the power structure, or to represent the solidarity of joining arms with others who have been oppressed. To me, the symbolic potential of the arm resonates so profoundly as an intersectional tool because Ahmed’s feminism is intersectional. Her discussions about being a queer woman of colour still stick with me; when she describes being in “a sea of whiteness” it’s as poetic as it is critical. She also includes trans women in her analysis of living a feminist life, and is inclusive of this group even when she discusses topics such as lesbian feminist pedagogy. The second wave of feminism did a lot of great things, but the separatists from that wave have often excluded transgender women. Ahmed does not exclude; everyone is invited to use the feminist tool kit, because everyone needs one.

Living a Feminist Life is the perfect introduction to Ahmed’s academic work, if a general reader is unfamiliar with her. She references her past critical work in passing, along with some of her most significant concepts (like the “feminist killjoy”), while anchoring them in her own experience. To Ahmed, emotions, bodies and experiences don’t exist in a vacuum; they express something much larger. So while she starts with the personal, she does get political and academic, but manages to avoid the overt moralising that sometimes comes with the ‘how-to’ genres. She also doesn’t despair. She quotes Emma Goldman’s sage advice about the revolution and dancing, which left me smiling.

For me, her lack of despair is the book’s strongest point. Ahmed’s work is as cutting and critical as it is joyful. There is a distinct hope and optimism for the future of diversity work – but still a demand for better.

Being made into a problem for pointing out a problem is always going to make us feel as if we’ve been wronged. Eye rolls burn the skin. But Ahmed demonstrates through her book that calling things out when they are wrong is not about pain, suffering or harm. It’s about joy – the joy of demanding something better, so we can all share it. In 2017, this is needed more than ever before.

Living a Feminist Life by Sara Ahmed is published by Duke University Press and can be purchased here.

The image used is the cover of the book which was taken from the publisher’s website. It is a white cover which includes the title ‘Living a Feminist Life’, the author’s name ‘Sara Ahmed’ and a quote from bell hooks which reads: “Everyone should read this book”. The ‘raised fist’ icon representing solidarity appears alongside the text, painted in pinks, reds, blues and yellows.