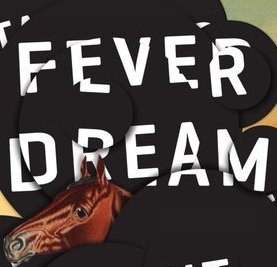 A fever you can’t sweat out Spoiler warning: This review reveals details from the ending of Fever Dream

Fever Dream is less a novel, more an intense experience of words and characters that will leave you disturbed and moved. Not really knowing what to expect, I flicked this little volume open on the Underground. Within minutes, the shifting carriage receded. The novel is written entirely in conversation. A young boy, David, is at the bedside of a woman, Amanda, who is incoherent with the nagging certainty that something terrible has happened. She doesn’t have long to live, but needs to make sense of how she got there, to find out where “the worms” came from, in order to understand what has happened to her.

Through the boy’s insistence that Amanda is focusing on the wrong things, missing out the most important details, we too are drawn into her unnerving story, picking apart the moments that led to this darkened clinic. A sense of impending dread persists, with the underlying question never disappearing – where is her daughter? It is a story, within a story, within another. On a summer trip to the countryside, Amanda meets Carol. What starts off as a driving lesson ends in a tearful admission – Carol’s little boy was poisoned, and she made a desperate decision to keep him in this world, even if it meant he would never quite be the same.

Through discovering the mysterious circumstances that led to David’s mother saying, “he doesn’t belong to me anymore,” we will discover how their stories are linked, how his tragedy is one and the same as Amanda’s, and how the love of a mother is a stifling and powerful thing. Each detail is meticulously unpicked in vivid detail, with prose that illuminates the Argentinian countryside, and reveals its darker underside.

Samantha Schweblin has been a big deal in Spanish speaking literature for a while, chosen by Granta as one of the 22 best writers in Spanish and winning the Juan Rolfo Story prize, among others. Despite her previous work being translated into 20 languages, Fever Dream is her first novel to be released in English. Having read To Kill a Dog, her short story featured in The White Review in January 2014, I knew that I would be in for something dark.

What I wasn’t expecting was the sense of urgency. Unable to finish the book in one sitting (how I wish the trains had been delayed) I spent the first half hour of my work day pretending to plan lessons, flicking through the last pages furtively under the desk. In an interview with Lit Hub, Schweblin says, “for me, creating tension is one of the most important things in reading and writing”, a concept which is certainly apparent in this book.

The imagery of love as a rope is both stifling and beautiful – the idea that those who bring us the most joy are also those that limit us, forcing us into a realisation of the threats in the world around us

We are given specks of darkness, among the apparently simple tale of a visit to a summer house in glorious weather. Piecing them together, urging the narrator forwards, is the voice of David. He seems to cross boundaries. In many ways he is the reader, urging her onward. As she says herself, “I can see the story perfectly, but sometimes it’s hard to move forwards.” David also seems to transcend his own story, able to see outside and beyond, aware of the wider shape of what has happened that neither Amanda nor the reader can fully comprehend.

From the outset, we know that Amanda is going to die. As the novel progresses, it becomes clear that the dark forces at play are very real threats to us, and the other creatures we share this planet with. It’s poignant that animals feature so heavily – this disaster is one that we share with them. The drive for profit and the proliferation of cheap produce is threatening fragile ecosystems, leaving the reader feeling unnerved at things that seem otherworldly, and things that are, unfortunately, all too real.

One of the most moving elements of the story is the theme of maternal love. Amanda refers to the “rescue distance” – that intangible measurement between her daughter and danger. She needs to articulate how close she wants to keep her daughter, in order to be able to reach her before something terrible happens. When danger is near, the distance shortens. The imagery of love as a rope is both stifling and beautiful – the idea that those who bring us the most joy are also those that limit us, forcing us into a realisation of the threats in the world around us. That, in truth, there is no way we can truly keep children safe from the horrors of the world.

For Schweblin, this preoccupation with mothers is personal. She describes how, when she was young, “when something went wrong that was related to the soul, to emotions, women took care of it.” While this could be seen as a lazy brushstroke for the traditional ‘mother earth’ stereotype foisted upon women, it seems poignant that the central character is a grown woman, and her guide through the book is a young boy. The other males are either absent or entirely useless, preoccupied with material wealth, completely unable to articulate their emotions or recognise the changes that have happened to their own offspring. In fact, as Amanda gets more desperate, she seems to latch on to the idea of finding her husband, as if his presence will somehow help to reverse the awful series of events. In this way, we’re back in traditional gendered territory, with men presented as rational and lacking emotion. The twist is, neither the supposedly ‘male’ logic nor the female ‘intuition’ has any power against poison.

Be prepared to put aside a couple of hours, as this is one you have to read in one go. A powerful novel that will linger at the edges of your consciousness for days after you put it down.

Fever Dream is published by Oneworld and is available to purchase here.

The image is of the book cover which shows a brown horse partially obscured by black circles so that only its head and some of the front of its body are visible. In white capital letters the title FEVER DREAM and below the horse’s head the author’s name SAMANTHA SCHWEBLIN appears in white is slightly distorted by the overlapping black circles.