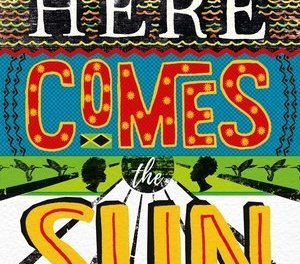 Despite its optimistic title and bright, bold cover, Here Comes the Sun is not the classic beach read it might appear at first glance. The cheerful package stands in stark contrast to the novel’s sobering depictions of women struggling to forge their own paths in a Jamaican village.

Born and raised in Jamaica, debut novelist Nicole Dennis-Benn writes with incredible authenticity – whether it’s capturing the local dialect, or illustrating the shocking disparities in wealth between tourists at the island’s lavish resorts, and the Jamaicans who live on its edges. In Here Comes the Sun, it’s the impoverished fishing village of River Bank, on the outskirts of Montego Bay.

Dennis-Benn’s novel focuses on sisters Margot and Thandi, and their mother Delores. Although they’re not always likeable – or their choices relatable – the moral complexities and individual burdens of these characters have us invested from the get-go.

Thirty-year-old Margot has a much-coveted job working at the front desk of a luxury resort in Montego Bay. Ambitious to a fault, she also sells sex to wealthy guests, balancing this secret life with her affairs with the resort’s married owner, Alfonso, and Verdane, the River Bank woman she has loved since she was a girl. She struggles to keep her blossoming relationship with Verdane in the shadows, having been brought up in a society where homosexuality is not just frowned upon, but downright dangerous. It’s not unusual for Verdane, who was outed to her community as a young age, to face physical threats or find dead dogs on her doorstep.

Meanwhile, Margot seeks to shelter her younger sister Thandi from a similar fate, and goes to great lengths to secretly obtain her a scholarship to a private school. Thandi is their family’s ticket out of poverty, and she faces constant pressure from both Margot and their mother Delores. However, the fifteen-year-old is more preoccupied with becoming an artist, fitting in with her posh peers, and bleaching her skin. As an indicator of status, and her preferred way out of River Bank, Thandi’s complexion is “neither the nutmeg-brown that makes Margot an honorable mistress—a rung lower than a bright-skinned wife—nor is she black like Delores, whose skin makes people sympathetic when they see her.”

White sand beaches and all, she paints a picture of paradise in its rawest form – where it’s no paradise at all

Delores is perhaps the most unsympathetic character of the three. Her emotional scars are only touched on briefly, yet they set the tone for her as a mother. She treats Margot with cruelty and Thandi with derision, yet even after the novel’s final pages, we continue to hope that she truly wants the best for her daughters.

We empathize most with Delores when a woman at the market, where she sells knick-knacks to tourists, cruelly teases her for being hated by both Margot and Thandi. But Delores, too, hates her mother – a woman who once savagely beat her for getting pregnant by the town cad. In that moment, we catch a deeper glimpse into the vicious cycle of sexual exploitation and self-doubt trapping the women of River Bank.

In one scene, Delores says to Thandi: “People g’wan disappoint in life. Is jus’ so it guh…. At di end ah di day, dis is we life. Look around yuh, gyal. Look where yuh is. Dis piece ah ground worth more than we. Yuh see dis air we breathing? Is debt we owing.” Sucked dry of optimism Delores is resigned to her fate. Margot and Thandi, however, are not, and perhaps this is what she resents most about them – and what we resent in Delores.

For a novel that has a mother and her daughters at its core, Delores’ own mother Mama Merle is noticeably absent, sitting without a voice at the fringes of conversation. She blends into the backdrop of their River Bank hut much like the furniture. While Delores attributes Mama Merle’s silence to her broken heart, sustained after her son moved to America, it also seems to be a comment on how women in their community, once exhausted of their purpose, simply fade away.

At one point Delores says to Thandi: “Who yuh know really love a black girl for more than what’s between her legs?” But Margot and Thandi both want more for themselves, and this is what moves the narrative forward. Margot’s tactics aimed at becoming the manager of Alfonso’s newest hotel are debauched and reckless, and we are left wondering whether the cost of her ambition is too high. Thandi’s dreams are more malleable and open-ended – as is her fate.

The characters are what make Here Comes the Sun such an excellent, compelling novel, although Dennis-Benn’s portrayal of Jamaica is no less profound. White sand beaches and all, she paints a picture of paradise in its rawest form – where it’s no paradise at all. The sun won’t always come out when we need it.

Here Comes the Sun is published by Oneworld and is available to purchase here.

The image is of the book cover which reads HERE/COMES/the/SUN with the words on different lines. “HERE” is in white font against a black background with red, yellow and green wave-like lines on it. “COMES” is in red font with yellow spots against a blue, textured background with wave-like curved lines framing the word. The word “the” is in italic, white font and “SUN” is in yellow font with red going through the middle of each letter. These two words are on a green and white background with what looks like a print of the sun in black with its rays facing downwards at the centre, with the faces of two women in silhouette either side of the word “the”. At the bottom of the page is the author’s name “NICOLE DENNIS-BENN” in red font surrounded by a diamond shaped red boarder. At the bottom of the cover is a green cityscape.