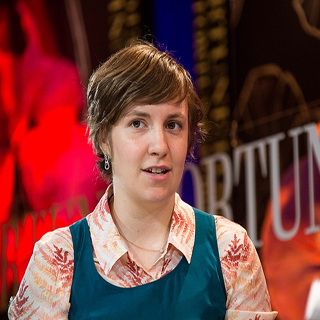 The downfall of Lena Dunham For better or worse, Lena Dunham is known for speaking her mind, whether the subject is politics, Photoshop or Bill Cosby. But lately the actress and creator of Girls seems to be in the press for all the wrong reasons, and like the title of her recent essay, she’s #sorrynotsorry.

A film co-created by Dunham was recently released, celebrating 100 years of Planned Parenthood. Featuring a star-studded line-up including Mindy Kaling, America Ferrera and Meryl Streep, the video commemorates Margaret Sanger’s decision to open the birth control clinics that would later become Planned Parenthood and the organisation’s contribution to reproductive rights over the last century. Beautifully combining animation and archival footage, the documentary is a masterpiece of feminist prose that brought even me, a staunch non-cryer, to tears. Still, after Dunham’s recent abortion comments, it’s difficult to see her as a positive figurehead for the pro-choice movement, and with Donald Trump now officially in office, we need as many figureheads as possible.

In the December 2016 instalment of her podcast Woman of the Hour, Dunham made a careless statement about abortion. Titled ‘Choice,’ the episode was supposed to celebrate female body autonomy. After introducing a woman who had come on the show to share her abortion story, Dunham admitted that she felt like a hypocrite, as she herself had never an abortion. I understand this feeling, but, obviously, you don’t have to have had an abortion to be pro-choice. The problem came when after recounting the time she visited a Planned Parenthood centre in Texas, Dunham said: “Now I still haven’t had an abortion, but I wish I had.”

What Dunham was trying to say was that if she had had an abortion, then perhaps her support for reproductive rights would have held more weight, as she could speak from personal experience when attempting to destigmatise the procedure. However, her choice of words didn’t go down well with listeners, who assumed she was making light of what is a difficult time for many women faced with an unwanted or medically unviable pregnancy.

Unsurprisingly, news outlets and social media pounced on the story, and as 2016 drew to a close, the comment was everywhere. Dunham apologised, but the damage had already been done, with the New York Daily News dubbing her as a symbol of the “out-of-touch left.”

This reaction may seem harsh. After all, Dunham was trying to be supportive of reproductive rights. But this slip of the tongue would be easier to forgive if Dunham hadn’t needed to apologise for so many other poorly thought out comments over the past few years.

As much as women don’t like random members of the opposite sex to paint their expectations onto them, neither do men

Just ask Odell Beckham Jr. In September 2016, Dunham apologised for a comment she made about the NFL star in an interview after running in to him at the Met Ball. Reciting a conversation she claims she had in her head, Dunham said: “I was sitting next to Odell Beckham Jr., and it was so amazing because it was like he looked at me and he determined I was not the shape of a woman by his standards. He was like, ‘That’s a marshmallow. That’s a child. That’s a dog.’ It wasn’t mean — he just seemed confused.” She later apologised, saying that she was projecting her own insecurities onto the 24-year-old football player. But believe it or not, as much as women don’t like people to paint their expectations onto them, neither do men – stereotyping Odell Beckham Jnr. as a thoughtless jock just isn’t cool.

In 2015, Dunham compared the now-extinct blog Gawker to an abusive partner. Dunham quickly backtracked on Instagram, saying: “When I heard my own quote I was like ‘Jesus, Lena, no’… I regret that earlier comparison because it doesn’t accurately describe the condition of being attacked online AND it appears to make light of domestic violence, which ain’t my style.” I think this shows that even as she said them, Dunham may have been aware of the effect her words might have had, but she went ahead and said them anyway.

This is very different from when Dunham first came into the mainstream in 2012, when the then 26-year-old was a much-needed breath of fresh air for girls like me. As a millennial woman fresh out of university, I strongly identified with the characters on Girls. So much more relatable than Sex and the City, the dramedy explored the kind of real world trials and tribulations my friends and I were enduring – from fuck boys to trying (and failing) to get on the career ladder. Basically, Girls summed up that whole self-absorbed ‘I’m still figuring myself out’ phase, and Dunham and her tell–it-like-it-is approach was my idea of modern feminism personified.

Dunham is a poor representation of third wave ideals

Flash forward five years, and it’s a very different story. Maybe it’s because I’m older and more socially conscious, but it’s painfully clear that Dunham is a poor representation of third wave ideals. These days, the star is more closely associated with white feminism – she claims to be speaking up for gender equality, while ignoring the struggle of other races and minority groups. Not long after the scene with Beckham Jnr, Dunham came under fire yet again for sexualising Parenthood actor Michael B. Jordan. “I’ll try and dance myself onto Michael B. Jordan if I have the chance, even when I’m a married grandma. I’m a red blooded str8 woman!” Although probably meant as a compliment (which, by the way, is what a lot of catcallers also say) Dunham was either ignorant to or just chose to ignore the history surrounding the sexualisation of black bodies – both male and female.

And let’s not forget that awkward tweet back in August 2012. Around the same time as gunman Wade Michael Page fatally shot six people at a Sikh temple in Wisconsin, Dunham tweeted a snap of herself in a headscarf wrapped to resemble a hijab (many Sikh women also opt to wear headscarves rather than turbans), along with the caption: “I had a real goth/fundamentalist attitude when I woke up from my nap.” Understandably, the Twittersphere was less than impressed with the joke. Dunham’s response? “Been in production and completely not reading the news. Didn’t realise what a bad time it was to make a joke like that. Not a good excuse you guys, but an excuse nonetheless.” She later tweeted that she would “contemplate the boundaries of humour,” but not until after one Twitter user reminded her that there is never a good time to “play ethnic.”

At least Dunham seems more aware of the criticism surrounding her these days. In a recent interview with Time Magazine, she stated that she wasn’t interested in defining any other woman’s feminism, and that in the future she would try and choose her words more carefully: “I recognise that I’m not everybody’s cup of tea, but I could be as poised and well-spoken as Princess Diana, and if this were my belief system, I would still be receiving threatening messages.” She also addressed whether her divisive personality makes her the right person to represent Planned Parenthood under a Trump administration,

“The fact is, Planned Parenthood is a polarizing issue… There isn’t going to be a perfect face of Planned Parenthood because of the amount of people in America who simply don’t believe that women should have ownership and control over their own bodies… Do I want to learn to speak better and more concisely and more appropriately about every single aspect of reproductive freedom? Of course. Do I think that there will ever be a perfect advocate of reproductive freedom? There can’t be.”

If Dunham wants to be a role model for women’s rights, she needs to be intersectional in her feminism. White women like Dunham are not the sole benefactors of the movement, and this needs to translate in her words and actions. As Laurel Thatcher Ulrich once said, “well-behaved women seldom make history,” but if you’re offending those you claim to fight for (i.e. arguably, all women), then you’re probably making the wrong kind of mark. Planned Parenthood is an organisation already battling so much (unwarranted) stigma, it might not be such a good thing that a controversial figure like Dunham is endorsing it and possibly bringing more issues to its door. After all, the organisation is already battling anti-abortion lobbyists and potential cuts to funding; I wonder if Dunham’s actions are helping or hurting the cause. Although it is admirable that Dunham manages to regain favour after every public disgrace, how long is it before she crosses the line one too many times? Considering who and what Dunham claims to stand for, from now on will she take her own advice and think before she speaks? It would certainly be a start in redefining her public image, but only time will tell if the self-awareness seen in her work translates to her real world actions.

Image description:
The photo is of Lena Dunham, she is not looking directly at the camera but instead as if she is thinking. There are bright, vibrant colours of red, orange and blue behind her. The image is used under a Creative Commons licence.